Schrodinger's Zebra said:
Without using any more icky words... are you saying that would likely have to be an ABC cat, then, as opposed to a normal-sized moggy?
Click to expand...

A big roe doe might weigh 50 lbs. As a guesstimate, l’d reckon that a carnivorous animal could get 30 lbs. of edible meat off its carcase, depending on how fussy/hungry it was.

Schrodinger's Zebra said:
Seeing pictures like that turns my stomach, so your description has (inadvertently, I know ) not helped.

Without using any more icky words... are you saying that would likely have to be an ABC cat, then, as opposed to a normal-sized moggy?
Click to expand...

Cats don't eat carrion, and if it was a canine, the vertebral processes would've been chewed away. These bones have been chewed around, and then licked to get the remains off.

I suppose that there could have been a mob of moggies to eat that amount of deer.

And thanks for the clarification too.

Really must get around to watching that Tomorrow's World video.

Anyway, recently Mr Zebra and I had occasion to visit the area where I (along with family members) had seen, on several occasions, an ABC Cat when I was younger. With the benefit of being adult and looking at things more logically, we stood where I stood all those years ago, and looked across at the forest where it had been sighted.

The distance (as calculated later using google maps) was approx. 300 metres. But even as we were standing there we both knew there was no way a normal-sized cat would have been visible at that distance, and certainly not at the size it had appeared to us.

So... I think it remains unexplained... at least for now

Oooh, I remember this when it was first shown. I've thought back to it often. I look forward to watching it again.

The rewilding of Britain. I'd love to see the brown bear, wolf and lynx back in the UK.

Yet another UK ABC film. This one featuring FT's own Karl Shuker, the late Trevor Beer and a bloke with the poshest name going.

The chap on the advert at the start can't pronounce cryptozoology either.

And another one with clips from local news as well. The cat filmed on the far is transparently a domestic moggy that has nothing to do with the sheep kills.

For once, it actually appears to be the real deal. Blimey. Gods know how it got up there though although I suspect it had been kept in a house and was trying to get back in.

Yup, showed the video to Mrs. Tribble (resident cat expert, crazy cat lady and viewer of many cat videos) and she reckons it's something panther-y.

The animal, which wildlife experts believe was about six-months old, was being kept as a pet and got out through an open window while its owner was on holiday, French media reported.

Imagine waking up and that is lade on your chest purring away, or worst still licking it's lips.

RaM said:
Imagine waking up and that is lade on your chest purring away, or worst still licking it's lips.
Click to expand...

Our cat likes to lie on your chest, then turn around and shove its bum in your face.

Tribble said:
Our cat likes to lie on your chest, then turn around and shove its bum in your face.
Click to expand...

That does sound rather catly, it is true.

Black panther stolen from zoo after capture in French town

The black panther captured while walking the rooftops of a French town has gone missing from the zoo to which it was taken and is believed to have been stolen.

Authorities said the panther, captured last week while wandering loose in Armentieres, was taken to the Maubeuge Zoo while awaiting transfer to a refuge for mistreated animals, but was discovered to be missing during a Tuesday morning inspection.

Investigators said there was no damage to the enclosure, but the security system appeared to have been tampered with by the apparent thieves.

Veterinarians said the panther, believed to be between 5 and 6 months, had been declawed before escaping from its owner's home through an open window last week.

Police said they have identified the owner of the illegal pet, but the person has not been charged.
Click to expand...

Oh the poor creature... Us humans really are shits.

A MUM has told how she saved her two young children from a ferocious “supercat” as it stalked them in their garden.

Dr Neetu Nirdosh hurled a toy at the spotted beast as it snapped at the petrified kids.

A second investigation has begun into sightings of a puma-sized cat in the Hunter Valley after the ABC obtained footage of sighting on New Year's Day.
Bev Fraser said she will never forget looking down a fence line on her Hunter Valley property on January 1, and spotting what she described as a "puma-sized cat".

"It was just a very big, very, very, very black cat, and obviously a cat," Ms Fraser said."It was too large to be an overgrown domestic cat — just a 50-kilo sort of animal sitting on my fence post."

Ms Fraser, who lives on the outskirts of Maitland in New South Wales, said she had not been able to get closer than about 120 metres before the animal sensed she was there, and that she could only zoom so much to get an in-focus image.

She said the cat's size could be determined in relation to the sturdy fence post on which it was sitting.
"You look at it, and look at the proportion of the size of the animal to the post, and you go holy cow," she said.
Click to expand...

My first thought was a ocelot.

RaM said:
My first thought was a ocelot.
Click to expand...

Except Ocelots are spotted. This one is described as 'very very black'.

I don't know if I said this before, but I guess that in the UK ABCs are a thing because in several other places the reaction to a sighting are just "Not again!", and they are mistaken for normal animals.

Which of course makes the UK cases important, because there are more reports.

I think I found the problem: 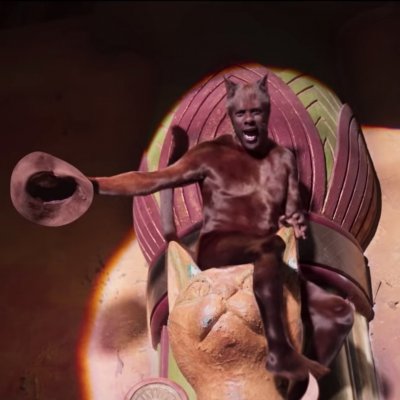 Creepier cats than any ABC, I am sure you'll agree....

Black panther allegedly on the loose near San Severo, Italy - supposedly released by a Mafia boss. Police and Carabinieri are using drones, thermal imaging cameras and bait to track it down. Seems the story's been running since at least 15th January.