This article claims that these black foxes are "a mixture of the wild red fox and tame foxes." But surely any tame foxes that exist in Norway are red foxes anyway? I am not aware of any species of fox that has been domesticated or selectively bred in captivity, or that is routinely kept as a pet (unless there is a Norwegian Fox Fancy that non-Norwegians wouldnt have heard of).

The only other fox I can think of that might exist in Norway is the Arctic or Iceland fox, which is white and smaller than a red fox. And IIRC fox/dog hybrids, although they have often been claimed to exist, should not be genetically possible.

Red foxes do come in a number of colour phases, and I have seen ones with black markings on them, so an all-black "red" fox (like black Scottish Wildcats, or black leopards) isn't outside the realms of possibility. But a whole population of black foxes, which also differ from red foxes in size and behaviour, sounds like it must be a different species.

This reminds me somewhat of the large, black Kellas or "rabbit-headed" cats in Scotland, which are thought to be a larger and more aggressive hybrid between Scottish wildcats and "Oriental" breeds of domestic cat.

The Russian scientist Balaev carried out experiments for years on silver foxes.These are basically blackish with silvery tips to the fur. He bred the tamest to the tamest for many generations eventually producing totally domesticated foxes that actively seek out human companionship in the same way a dog or cat will (the tamest also sometimes exhibit other domesticated traits like soft ears and white spotting).These foxes can easily be kept as pets as they like human company so much. The foxes from the experiments are possibly sold as pets and might be the same tame black foxes mentioned in the article.
N

Not a Norwegian Fox, but a UK one

A man who saw a rare black fox on a country lane said he initially had "no idea" what he was looking at.
Karm Singh was heading home after a walk on the beach at Brean in Somerset when he saw the animal on the side of the road.
Mr Singh said traffic came to a halt as people stopped to see the rare sight.
The animals are a type of North American red fox with a trait that makes their fur silvery-black.
"The car in front of me stopped and then I saw what I thought was a stray dog at first but as it got closer I realised it was a fox," said Mr Singh.
"I had to Google it as I had no idea a fox that colour even existed.
"The traffic was building up behind me. It was crazy." 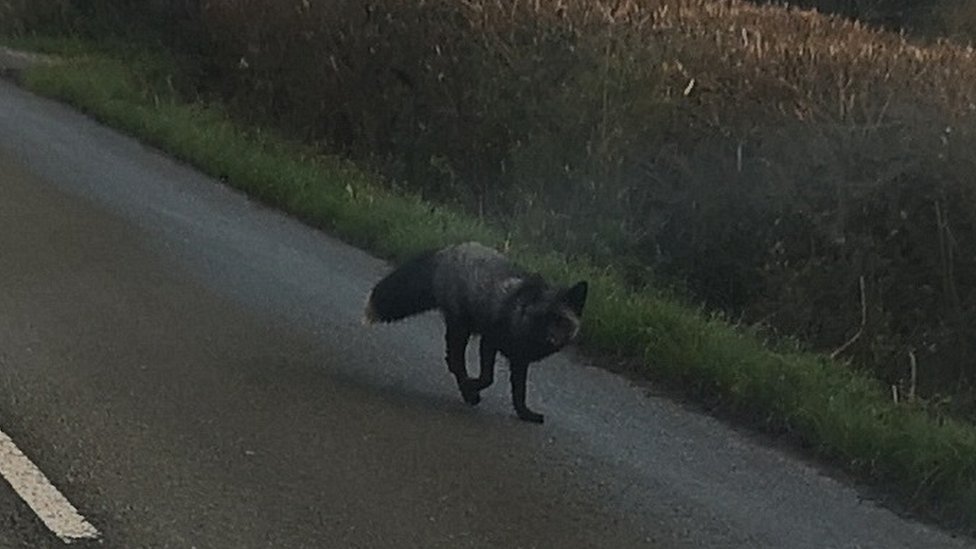 Gorgeous foxy. If it wasn't bothered by queues of drivers stopping to take its photo it seems likely to be a pet? Hope it gets home.

eziofan said:
It was an escapee and is now back home.
https://www.bbc.co.uk/news/uk-england-somerset-55478078
Click to expand...

Gosh, what a gorgeous boy he is. I'm glad of some good news.
N

Sharon Hill said:
Gosh, what a gorgeous boy he is. I'm glad of some good news.
Click to expand...

If Black Foxes UK say they make up less than 0.1% of the fox population here, we're still talking about hundreds. All in captivity ?

Ghost In The Machine

I'd love to see one of these! Only ever seen the red Reynard.

Did want to contribute to this thread though because around 15 years ago or so, we started seeing black toads in our garden. Not every toad was black but many were.

No idea what was going on - some kind of mutation or a disease? They didn't seem ill as far as you can tell if toads are ill - I mean, these weren't dead toads. Black toads everywhere.

That was a particularly good year for toads not just my garden but the fields around. The following year there was some kind of Toad Plague and we barely saw one - and no more black ones.