Stillill said:
Thank you very much.
Click to expand...

I'd like a view of the crest on the side.

This is the best I can with an iPad camera.

In beautiful condition. Should get a good price.

On the anniversary of the Colwich train crash, 35 years ago.

The only fatality was Eric Goode, driver of the Liverpool service. He is remembered as a railway hero for seeing the danger and applying the brakes in the 8 seconds he had to react. A street in Crewe is named after him.

Eric Goode was a relation by marriage of my family and I went to primary school with his sons. They were nice boys.

There are lots of photos of the crash site online but here are two from Crewe. 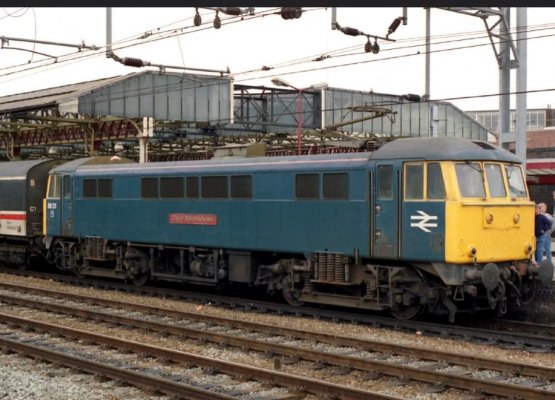 After, scrapped at Crewe Works. 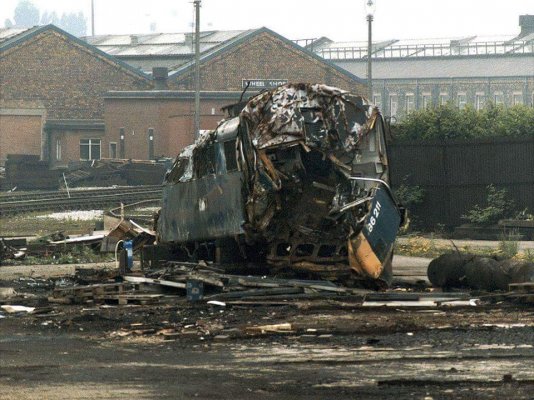 Stillill said:
This is the best I can with an iPad camera.View attachment 45267
Click to expand...

I thought it was that but couldn't be sure.

Mythopoeika said:
In beautiful condition. Should get a good price.
Click to expand...

Unfortunately not mine but I’m getting a cut on his trains that I’m selling.Strangely no maker name on it so it’s either scratch built or a kit.

Here is a similar model priced at £189

Nosmo King said:
Here is a similar model priced at £189

Definitely the same train but I think that’s OO gauge. This is an O gauge but gives me a rough idea of prices.

Stillill said:
Definitely the same train but I think that’s OO gauge. This is an O gauge but gives me a rough idea of prices.
Click to expand...

I’m going to list as an auction,I’m pretty sure it won’t sell anywhere near that price.

@escargot RIP Eric Goode the horror he must have faced with the helplessness.
First I have heard about this tragedy.

Gene Hunt73 said:
@escargot RIP Eric Goode the horror he must have faced with the helplessness.
First I have heard about this tragedy.
Click to expand...

Bless him, he did his duty.

The driver and a trainee in the other engine were able to jump to safety seconds before the impact.
All Eric could do was slow the train down in the hope of reducing the force of the impact. He succeeded at the cost of his own life.

The cause was a complicated signalling issue which recurred in 1999 at Ladbroke Grove, resulting in 31 deaths and hundreds of injuries.

The carriages from that crash were also taken to Crewe. I saw them, on railway land next to the Four Eagles pub. By that time the area was being redeveloped and you could drive right past wrecked rolling stock that was there for investigation.

Old trains and snow plus a strangely wonderful soundtrack:

Nominated for an Oscar! From the late, lamented British Transport Films (remember when public services had their own film units?!).

Noticed that Johnny Hawksworth appeared in the credits. He wrote the theme tunes to Man About the House, George and Mildred, Roobarb and the Thames TV identity tune.

It takes guts to drive a train especially a steam train hard in poor conditions,
or a complete lack of imagination.

I'm too young to remember steam trains, but the Blue Pullman and the Western Region diesel hydraulics (Westerns and Warships) are my childhood memories personified. I'll show this to my 87-year-old dad who's sure to enjoy it, and is clearly old enough to remember steam.

And that is a strangely modern soundtrack for 1963.

Unsure of the precise location, but apparently visible from the Bodmin & Wenford Railway: 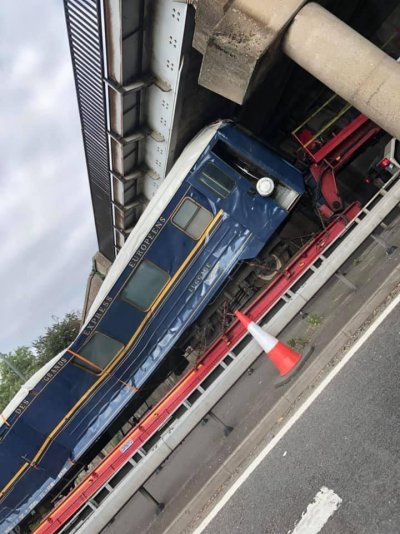 Maybe an idea to avoid the Hornsbridge Island if you can. A railway coach being transported has hit the bridge. Long delays in the area.

This railway coach is believed to be used in the filming of the new Tom Cruise movie Mission Impossible 8 currently being shot in Stoney Middleton.
Click to expand...

It's all sorted now! Apart from the dent.

More Tom Cruise news - the bent train was already damaged. It's a movie prop, not an actual carriage, and was being moved with a police escort from a quarry where it had been chucked over the edge in aid of the plot.

Here it is setting off -

Here are snaps of the damage after the bridge strike - 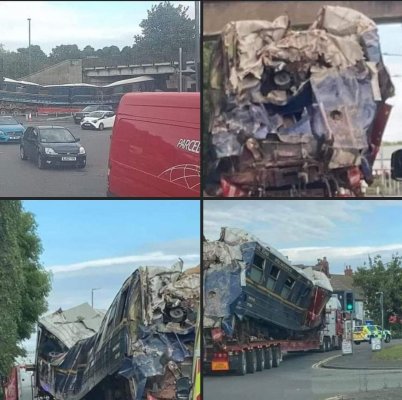 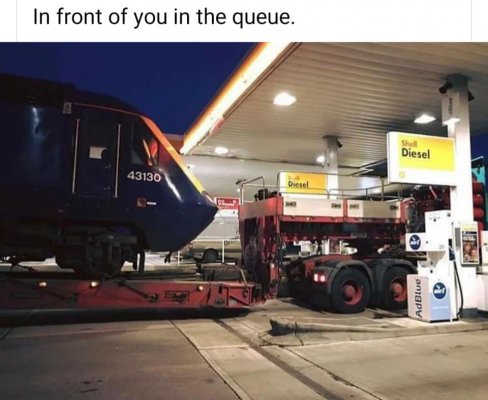 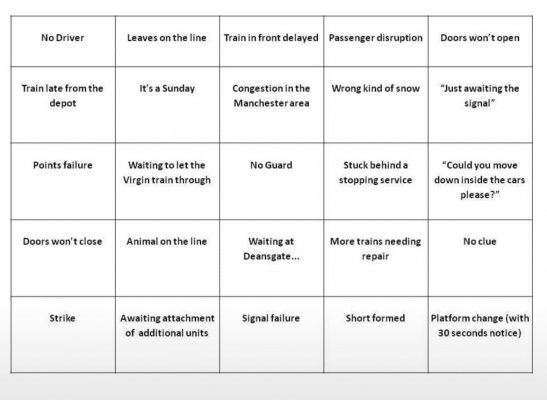 (TOC being Train Operating Companies in case anyone doesn't know.)

Here are some 1980s Crewe Diesel Depot photos snarfed off a Facebook page. 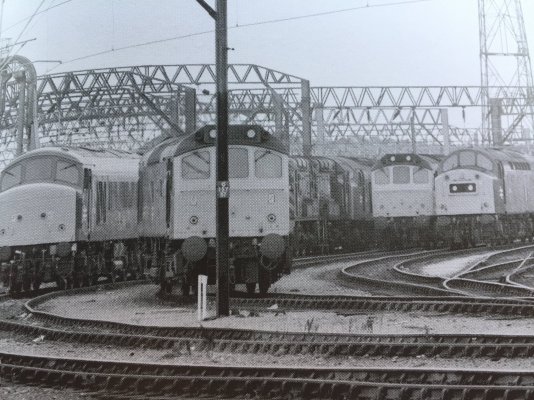 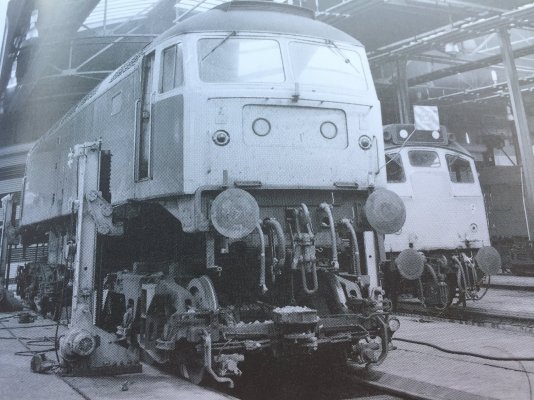 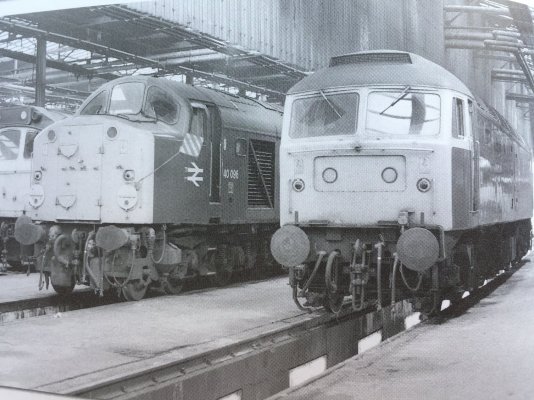 Remember going to the open day there October 91.
I remember getting a bus into town (Manchester) then a train to Crewe.
£1-50 entrance fee to get in if I remember rightly.
My parents would have grounded me if they found out I went alone!
They thought I were playing five-a-side for the Boys Brigade!
Crewe is a fair way away for a 13 year old..

A sixty year old locomotive dragging something a lot younger to York.
On the Lancashire /Yorkshire border at Saddleworth viaduct.

Who's up for this?

Calling all train aficionados: Asakusa Tobu Hotel is celebrating its first anniversary by installing a Tobu Railway simulator in one of its rooms.

Available only during the day for a limited time, the room is even decked out in station signages and train-themed bedding to give trainspotters a fully immersive experience.
Click to expand...

escargot said:
Who's up for this?

Asakusa Tobu Hotel in Tokyo now has a room with a train simulator
Click to expand...

Reminds me of when I was involved in the construction of a new signalling and training centre for SWT there was a room with 4 huge train simulators in it.

Nosmo King said:
Reminds me of when I was involved in the construction of a new signalling and training centre for SWT there was a room with 4 huge train simulators in it.
Click to expand...

With a double bed and room service?