A wealthy Sri Lankan presidential candidate said he will use his personal fortune to buy a cow for every home if he is elected.

"Every Sri Lankan home will be gifted with a high milk-yielding cow from (the Indian state of) Kerala which could be expected to yield 10 liters (2.5 gallons) to 16 liters (four gallons) of milk every day," Victor Hettigoda was quoted as saying by The Island newspaper on Friday.

"Even families who live in flats, who could make suitable arrangements to look after a cow, will receive a gift of cow," he was quoted as saying.

Anusha Vitanapathirana, a spokesman for Hettigoda, confirmed the report.

Hettigoda is one of 13 candidates vying for the tropical island's top executive post in the Nov. 17 presidential election. The leading candidates are Prime Minister Mahinda Rajapakse and former Prime Minister Ranil Wickremesinghe.

Hettigoda said his plan was a sure way to fight malnutrition and make people prosper, and suggested that excess milk could be converted into cheese and butter or even exported.

Sri Lanka's indigenous cattle are poor dairy animals. They are small, with an average adult weight of 350 pounds, and low milk yields.

Hettigoda owns an herbal medicine empire, the Siddalepa Group of Companies, with 3,500 employees.

Aberdeen scientists are carrying out commercial trials on a feed additive which they hope will stop cows from producing large amounts of methane.
Cattle are capable of producing 500 litres of the potent greenhouse gas every day, mostly through belching.

Researchers at the Rowett Research Institute have found a way of cutting back on the methane produced by ruminants like sheep and cows.

A one-year trial has now begun with an unnamed commercial partner.

The natural additive works as part of the normal digestive process.

Dr John Wallace, who is leading the research, said: "We've done a lamb trial recently in which we used this additive and we obtained a 70% decrease in methane formation.

"This is great for the environment but it's also a win-win situation as the farmer benefits as well because the energy in that methane is retained in the animal's body.

"It means the animals grow 10% more efficiently. For every kilogramme of feed they consume they produce 10% more body weight."

The hope is to get the same methane reduction seen in sheep for cows.

However, farmers will be more interested in the resulting weight gain.

Aberdeenshire beef farmer Alistair Smart said: "The environmentally friendliness of the thing is very difficult for us farmers to equate to.

"It would never come into our daily equations but if there is a weight gain to be had it's going to be beneficial and going to have a double-edged positive effect."

What's next? Fartless food for humans?

So if you eat a lot of meat, fish and dairy products, you wont make gas?

And what `is` wrong with gas anyway? Everyone farts.

Everyone farts. Take comfort in your friends.
W

From The Sunday Times

SCIENTISTS have bred cows that produce skimmed milk and hope to establish herds of the cattle to meet the demands of health-conscious consumers.

The milk is also high in omega3 oils, claimed to improve brain power, and contains polyunsaturated fat. The saturated fats found in normal milk are linked to increased risk of heart disease. The cows, which have a particular genetic mutation, were bred from a single female discovered by researchers when they screened milk from millions of cattle in New Zealand.

Butter from these cows has the extra advantage of being spreadable straight from the fridge, like margarine.

Scientists at ViaLactia, the biotech firm behind the £55m research, have named the cow Marge. Russell Snell, ViaLactia's chief scientist, said: "Marge looks like an ordinary Friesian cow but has three key differences. She produces a normal level of protein in her milk but substantially less fat, and the fat she does produce has much more unsaturated fat. She also produces milk with very high levels of omega3 oils."

Marge was discovered in 2001 when ViaLactia's researchers bought her from her owner for £120 and moved her to a secret location.

The key issue was whether her calves would inherit her traits. "You have to generate daughters and then they have to carry a calf and deliver milk," said Snell. "The eureka moment was when we found her daughters produced milk like their mother."

The Auckland-based company says the first commercial herds for spreadable butter could be expected by 2011.

A brief description of ViaLactia's research is due to be published this week in Chemistry & Industry, a journal of the Society of Chemical Industry. A formal research paper for a peer-reviewed journal will follow.

Britain produces 24.6 billion pints of milk a year of which 7.7 billion is for drinking. Growing health concerns mean that full-fat milk accounts for only a quarter of sales. The rest is semi-skimmed or skimmed, according to Dairy UK, the industry association.

ViaLactia hopes Marge's male offspring carry the same genes as her daughters. "To have a bull from Marge's offspring who passes on her traits would be the holy grail. It would allow us to reproduce hundreds of thousands of cows like Marge," said Snell.

The scientists are still trying to identify the genes behind Marge's unique traits. Klaus Lehnert, 43, Snell's deputy, said: "We do expect to find them. We are good at finding genes. Then we can use DNA tests to find if an animal has the trait, rather than rely on data from experiments."

Milk was once universally regarded as a health drink, thanks to heavy pro-motion by the government. Generations of children grew up with slogans such as "Drinka pinta milka day". Free supplies were given to schoolchil-dren and pregnant women. When questions began to be raised about the fat content of milk, the Milk Marketing Board switched to trying to sell milk as sexy, targeting housewives with slogans such as: "Is your man getting enough?"

"The New Zealand approach is exciting because people tend to avoid full-cream milk and go for semi-skim and skim. If whole milk can be made to contain unsaturated fats, which are good for you, then people may change back to whole milk," he said.

Dr Susan Jebb, head of the Medical Research Council's human nutrition unit, said such a milk could contribute to the nation's health. "Dairy products make a significant contribution to our saturated fat intake, which is already 30% higher than recommended. A milk that has less fat, and fats of a better type, would be a lot healthier."

Tom Brooksbank, of Norton& Brooksbank, one of Britain's leading livestock auctioneers and valuers, said animals able to produce such milk could command a premium. "A cow that produced milk low in saturated fats and high in healthy ones would be a big hit, especially if it was natural," he added.

Helen Wallace, of GeneWatch, the genetics watchdog, said it was important to ensure the mutations that produced the milk were not harmful in any way. "If so then using such animals would be far better than creating genetically modified cows."

Great! A cow that produces milk that nobody likes unless they are lactose intolerant.

It's strawberry milkshake-producing cows that I'm waiting for.
J

Ones that make White Russian cocktails would also be much appreciated...

Undine‏@HorribleSanity
If any of you are writing a murder mystery novel, may I recommend "Licked to death by cows?" (Carlisle Sentinel, 1902) 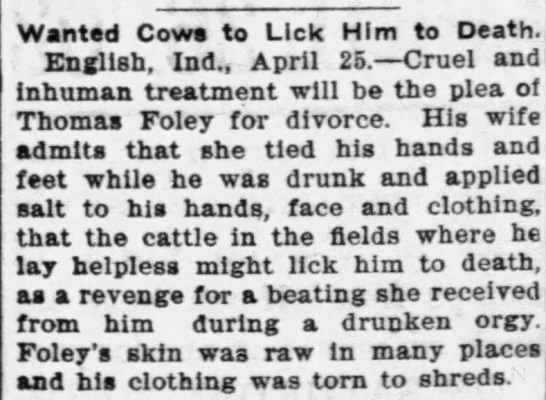 The cow ran away with bison.

A domesticated cow has surprised Polish naturalists by spending the winter living with a herd of wild bison in the primeval Bialowieza Forest.

The cow "chose freedom" by running away from a farm late last autumn, and has been seen lingering on the fringes of a herd of some 50 bison in the forest on the Belarusian border, Poland's TVN24 news portal reports.

Ornithologist Adam Zbyryt was the first to spot the cow. He made the news in November when he told TVN24: "it's not unusual to see bison near the Bialowieza Forest, but one animal caught my eye. It was a completely different light-brown shade from the rest of the herd. Bison are chestnut or dark brown".

The cow is mooooooving on.

Answering the cow-l of the wild.

Hard for the cow to over-winter though, it's Friesian out there.

That's what Jersey's are for.

But then you wouldn't be able to shout "I name that tune in one" or "A bit more choke and she would have started" ?.

"A cow that escaped from her farm and went to live with a herd of bison is still with them three months on.
The young escapee trotted away last autumn and has reportedly been living with a herd of gigantic bison in Poland‘s Bialowieza Forest, near the border with Belarus.
Newly taken pictures and video showed the creature running with its new companions, albeit, seemingly, on the fringes of the herd."

I’ve herd that song before.

Cow wasn't in the mood to be slaughtered.

A cow set for a slaughterhouse has instead escaped, by ramming a fence and swimming to an island.

The runaway bovine has sought sanctuary on the islands of Lake Nyskie in southern Poland for the past few weeks.

Its owner gave up on capturing the animal after attempts to retrieve it led the cow to repeatedly swim off.

Calls to have the cow shot have been met with fierce opposition, with one local politician saying he has made it his mission to save the "hero cow".

It all started when the animal was being led towards a truck bound for an abattoir, Polish website Wiadomosci reported.

Cows help cops catch car chase suspect
Following a car chase, police in Florida arrested one suspect but another ran into a nearby field – before being chased by cows.

Officers say the cows were a "big assist" in eventually capturing the woman.

In the mood or in the nude?

The government in southern Sweden have granted permission for cows to visit nudist beaches during the prolonged summer heatwave, despite complaints from locals, it's reported.

According to The Local news website, nudists have been complaining to officials in provincial Smaland about livestock visiting their beaches, saying that their presence is "unhygienic and could pose a health risk".

It says the roasting summer heat affecting much of continental Europe has led to drought throughout the country, and has meant that farmers have been struggling to feed their animals.

This has meant that some farmers have decided to slaughter their cattle earlier than usual; but others have instead decided to bring their livestock to nearby nudist beaches, in order to cool them down, public broadcaster SVT reports. ...

Cows do tend to get overlooked - I was fascinated that if I spotted most of what I think of as a mundane animal I'd be heading for the "strange beast" area of these forums. A book by Werner Lampert of beautiful photographs of beautiful animals.

Cows are almost universal and so are tailored to their situation in many ways. They carry so much of humanities hopes, habits and expectations as well as being subject to our predation and thoughtlessness.

My now-ex girlfriend and I visited the UK a couple of times. She loved the cows more than anything, and when we were in Orkney she'd go out for walks and chat to them in Chinese. I found it amusing because they're so commonplace for me (I grew up right next to a large pasture), but it made me appreciate the animals a bit more.
You must log in or register to reply here.
Share:
Facebook Twitter Reddit Pinterest Tumblr WhatsApp Email Link
Top