Living among us undetected may be creatures (not necessarily alien) with all the outward appearances of human beings. The mimic would of necessity be a ‘lone wolf,’ likely living in a large, bustling city where the eccentric and the odd may flourish unhindered. For it is a curious fact of nature that that which is in plain view is often best hidden.
Click to expand...

One of my favorite themes in science fiction (and forteana) is the idea that we might share the earth with other intelligent beings. I started off the new millennium (well, the year 2000) by reading Scientific American (Jan. 2000) cover to cover (yep, I'm just the life of any New Year's party). An article therein -- "Once We Were Not Alone," by Ian Tattersall -- points out that our ancestors shared the earth with 15 - 20 other hominid species -- Neandertals, Homo ergaster, Homo rudolfensis, Paranthropus boisei, etc. And now there is only one (known) intelligent species. Why?

"In Levant, the coexistence ceased -- after about 60,000 years or so -- at right about the time that Upper Paleolithic-like tools began to appear." (pp. 61-62) In other words, the minute we created better weapons, we killed the bas---ds.

Maybe the "not noticing/not realizing how strange it is" factor is THEIR survival instinct, imposed psychically on those seven billion furless killer apes infesting the planet.

I think the Oz factor, unless Jenny is good enough to show up and explain what she meant, is the feeling there is something strange happening which can occur whether you're seeing a UFO or experiencing a timeslip or whatever, that there is something different in the atmosphere that you cannot define until the experience is over. You don't even need to see the UFO, either. I don't know if that's calmness, but it could be I suppose. I always thought it was more like a discombobulation as if seen from a distance.

My brother described what very much seemed to me to be The Oz Factor when he spotted what he thinks was a UFO over Bicester train station one sunny afternoon, and he wasn't aware of the phenomena (that experience screwed him up for months by the way. He was nonchalant if puzzled during the actual sighting, then a few hours later it hit him...). And I know I've felt very calm when witnessing/experiencing odd things and only afterwards thought, why they hell didn't I run screaming (or whatever)? But in the way of these things, I can't remember exactly what those experiences are right now.

This popped up in my Youtube recommendations the other day - a letter from the 9th century, written by a monk named Ratramnus, examining whether the Cynocephali have souls:

Well, supposedly men have souls, and some people say all dogs go to heaven, so . . . why not?

The Paranormal Nothing podcast on the subject of dog-headed men, on Youtube -

The Cynocephaly: A History of Human-Canine Chimeras

Restricted mostly to ancient mythologies involving pharaohs and fantastical creatures, is the creature known as the Cynocephaly (or dog-headed man) more of a flesh and blood human-canine chimera, or is it something more paranormal?
We'll analyze historical and contemporary sightings of the entity, and provide an analysis of the creature's reality.

Slightly light-hearted, but stick with me.

Someone on Twitter brought to my attention work by the Kraków based artist Joanna Karpowicz, who has painted a whole series of utterly charming pieces about an Anubis character wandering modern settings. Some of them look almost like painted descriptions of witness accounts.

One of the earlier reports of DHM on the FT message board, was someone who reported her and her brother, encountering a dark tailored suit wearing man with a black jackal / point-nosed dog head that she said looked VERY Anubis like. This came to mind looking at these.

And looking at some breeds of brachycephalic dogs, it appears that we are trying desperately to breed Men Headed Dogs.

Who knows where it will end?

Hi all. New-ish poster here. This is a fascinating (and in places quite amusing thread). I haven't yet read it all and it's late, but I just wanted to contribute a couple of pics. Apologies if anyone has covered this angle before.

These guys pop up a lot at LGBTQ+ Pride events and festivals. And why not? But thinking back to the OP, I suspect they probably weren't around in the 1960s, but hey, who knows? Maybe a few like-minded chaps got together and took a stroll one night. Just a thought.

CharmerKamelion said:
These guys pop up a lot at LGBTQ+ Pride events and festivals. And why not? But thinking back to the OP, I suspect they probably weren't around in the 1960s, but hey, who knows? Maybe a few like-minded chaps got together and took a stroll one night. Just a thought.
Click to expand...

This prompts the question, maybe Furries? 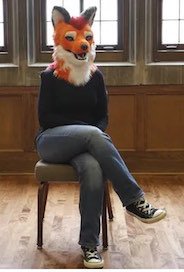 "The furry fandom has its roots in the underground comix movement of the 1970s, a genre of comic books that depicts explicit content.[5] In 1976, a pair of cartoonists created the amateur press association Vootie, which was dedicated to animal-focused art."

PS—I always have to fuss with the size of picture files, and I'm never happy! Always either too big or too small!
Last edited by a moderator: Mar 7, 2021

IbisNibs said:
This prompts the question, maybe Furries? View attachment 36218
https://en.wikipedia.org/wiki/Furry_fandom
"The furry fandom has its roots in the underground comix movement of the 1970s, a genre of comic books that depicts explicit content.[5] In 1976, a pair of cartoonists created the amateur press association Vootie, which was dedicated to animal-focused art."

PS—I always have to fuss with the size of picture files, and I'm never happy! Always either too big or too small!
Click to expand...

A little research suggests the leather dogs are into bondage/petplay. Not out of the question they're also furries, but furries at Pride events would far more likely be wearing anything from ears and/or a tail all the way to a full fursuit, depending on what's permitted by the organisers.
You must log in or register to reply here.
Share:
Facebook Twitter Reddit Pinterest Tumblr WhatsApp Email Share Link
Top