Douglas the Camel​
From Wikipedia, the free encyclopedia​
​ 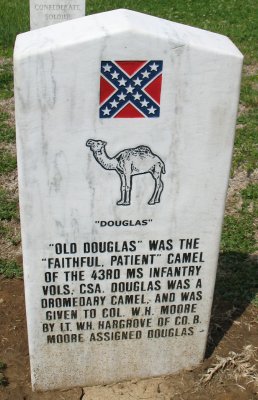 ​
​
Douglas The Camel, or “Old Douglas,” was a domesticated camel used by Company A of the 43rd Mississippi Infantry, part of the Confederate Armyduring the American Civil War. Because of Old Douglas, the 43rd Mississippi Infantry came to be known as the Camel Regiment, Douglas was originally part of a U.S. War Department program called the Texas Camel Experiment, which aimed to experiment with camels as a possible alternative to horses and mules, which were dying of dehydration in vast numbers. Jefferson Davis, who had ascended to the position of United States Secretary of War in 1853, was a strong proponent of the program, and used his political influence to make the experiment happen. Although the details are unknown, Douglas somehow made his way to Mississippi, and eventually died at Davis's hometown of Vicksburg, Mississippi. He was initially given to Colonel W. H. Moore by 1st Lt. William Hargrove. Besides being a mascot, Moore assigned Douglas to the regimental band, carrying instruments and knapsacks.​
​
Active service​
Though the men tried to treat Old Douglas like a horse, the camel was known to break free of any tether, and was eventually allowed to graze freely. Despite not being tied up, he never wandered far from the men. The Infantry’s horses feared Old Douglas, and he is recorded to have spooked one horse into starting a stampede, which reportedly injured many, and possibly killed one or two horses.​
​
Old Douglas’s first active service was with General Sterling Price in the Iuka campaign. He also participated in the 1862 Battle of Corinth. He remained with the regiment until the Siege of Vicksburg, where he was killed by Union sharpshooters. Enraged at his death, the men swore to avenge him. Col. Bevier enlisted six of his best snipers, and successfully shot the culprit. Of Douglas's killer, Bevier reportedly said, “I refused to hear his name, and was rejoiced to learn that he had been severely wounded".​
Reception​
Douglas is currently honored with his own grave marker in Cedar Hill Cemetery, in Vicksburg, Mississippi. He, along with other camels used during the war, is not overlooked by historians, nor by Civil War Reenactors. There is currently a group called the Texas Camel Corps, whose mission is to promote the stories of camels, like Old Douglas, used during the Civil War.​
​
Source:​
https://en.wikipedia.org/wiki/Douglas_the_camel​
​
One is minded of Wojtek, the bear that served with the Poles at Cassino:​
​
https://en.wikipedia.org/wiki/Wojtek_(bear)​
​
I love the fact that Douglas's death was avenged by a team of snipers!​
​
Last edited: Nov 15, 2019

What a great story re Wojtek the bear.

hunck said:
What a great story re Wojtek the bear.
Click to expand...

There is a statue of him in Princes Street Gardens in Edinburgh.

gordonrutter said:
There is a statue of him in Princes Street Gardens in Edinburgh.
Click to expand...

Will post a pic next time I’m passing, and also Bum the dog!

gordonrutter said:
Will ... Also Bum the dog!
Click to expand...

​
​
How long until his grave is vandalised by the woke for displaying - *squeal!* - that flag!​
​
maximus otter​

maximus otter said:
​
​
How long until his grave is vandalised by the woke for displaying - *squeal!* - that flag!​
​
maximus otter​
Click to expand...

Someone's bound to get the hump

maximus otter said:
​
​
How long until his grave is vandalised by the woke for displaying - *squeal!* - that flag!​
Click to expand...

​
I doubt the camel had an opinion on slavery.