ramonmercado said:
But did it prevent cheating?
An Indian school official has apologised after a bizarre set of images went viral showing students wearing cardboard boxes on their heads. ...
Click to expand...
Did anyone else see the news about this box-on-the-head incident and flash back to Hugo Gernsback's Isolator (1920s)? 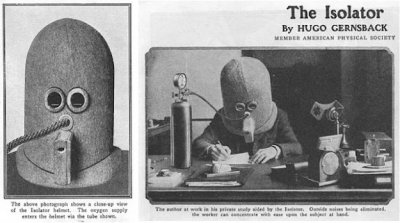 Maybe they need to arm the students in a case a teacher goes rogue.

A teacher in the US state of Washington has been arrested after allegedly threatening to shoot students.

When questioned by police at her home on Wednesday, the 58-year-old teacher did not back down from the threat and was taken into custody. Julie Hillend-Jones taught geometry at Emerald Ridge High School in Puyallup, about 35 miles (56 km) south of Seattle. It was not immediately clear what prompted her to make the threat. She initially made the comments on Tuesday night to another adult, who then alerted local education officials. They then contacted the sheriff's office. School district officials said Ms Hillend-Jones had immediately been placed on administrative leave.

Detective Ed Troyer of Pierce County Sheriff's Department said she was being held on multiple charges.

"If a kid makes those kind of statements, they end up going to jail, and they have to pay the price for it," Troyer told local KOMO News. "If a teacher makes them, that's a bad example and they have to be held accountable just as well."

'Never heard of' or couldn't say with certainty who they were?

Even so, it's hard not to be, still, slightly shocked.

Yithian said:
Even so, it's hard not to be, still, slightly shocked.