Late in the summer I was hiking in the Åland Islands (archipelago between Finland and Sweden), and the following happened.

I was sitting at the park, waiting for a bus to leave to the northern parts of the island. Near to me there was this thing. 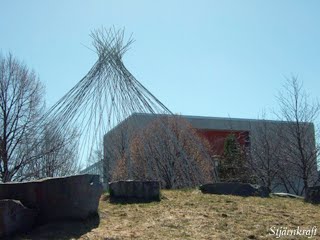 I guess it's some kind of modern piece of art consisting of crossing metal rods. Soon enough I noticed, that a jackdaw was stuck from his neck to the part where the rods cross. I thought he was dead - whatever, there's plenty of them around. I sat some more. Jackdaw seemed to be still alive! I guess I thought that it's not the birds fault that some artist had built such a metal monstrosity to the middle of the jackdaws home territory. I helped the poor bird out of its snare and put in on the grass where I left it to recover.

From that moment on the trip was a strange one. After I left the park the same jackdaw followed me in close vicinity, didn't come to the bus though. Stepping out of the bus, there was a jackdaw waiting near. I don't think it was the same bird. I laid on my back by the gate of the church soaking up the sun. A jackdaw by my side. Now I left to the forest side and thought that this jackdaw episode should be over now. True enough, I saw no more jackdaws. Can't say the same about other birds though. On "Getaberget" near the top of the hill, there was ospreys home tree.
The bird rose to the air while I passed her tree. It spiralled low in the air and screeched at me. The bird gently escorted me for about 2 kilometers before returning to her home. Immediately afterwards an eagle took the role of the escorter. Flying ahead of me, he flew a few times from one tree to another, until he heavily flew to the sea. At that moment I yelled to all the birds of Åland, both in Finnish and Swedish, that I like the presence of birds, but you don't owe me anything for saving the life of one jackdaw.
C

It was at this point, that the carrion which a crow had dropped onto your shoulder, dropped off. :lol:
But seriously, good tale. Birds are great.
B

Hehe, thanks. I'm not claiming that all birds have some kind of common sense of gratitude. But if nothing else it was a funny bunch of coincidences.

Lovely story, thank you for sharing. Who knows if it was anything significant.....what's the word for when we imbue human feelings/motivations to animals? It could be a case of that, or something all the more spectacular. I just adore birds, so I prefer the latter.
C

Anthropomorphism. But the connection here was that all the birds were carnivorous/omivorous. If some tits or finches had made an appearance, maybe a little Dr Doolittlery would have been going on!

coaly said:
Anthropomorphism. But the connection here was that all the birds were carnivorous/omivorous. If some tits or finches had made an appearance, maybe a little Dr Doolittlery would have been going on!
Click to expand...

Hmmm.....so are you suggesting they were all after a snack?
C

... Only if Bathory 13 had a hairstyle which resembled a distressed owl chick!
A

Jackdaws are very clever and can be tamed.

But maybe the other birds thought you responsible for the circumstance of the injured one and were stalking you.

Happened to me once with a red wing blackbird that freaked the entire avian inhabitants of High Park in Toronto and shifted them into attack mode. Was really scary.
N