A puzzling phone call shatters a writer’s routine. An enigmatic female voice extends an invitation to take part in Documenta, the legendary contemporary art exhibition held every five years in Kassel, Germany. The writer’s mission will be to transform himself into a living art installation, by sitting down to write every morning in a Chinese restaurant on the outskirts of town.

I bought the Dutch version today. Looks like a very intelligent and fun read! 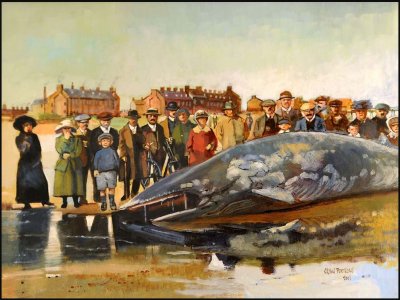 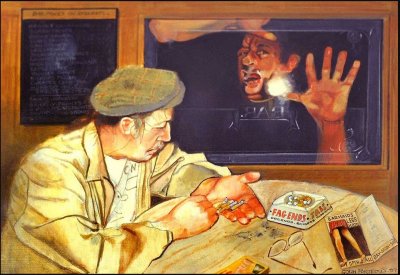 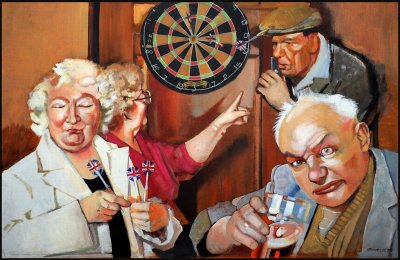 Each episode of Rod Serling’s Night Gallery had it's own painting. Here they are. Definitely weird.

davidplankton said:
These aren't Fortean, but I like them.
Click to expand...
They're technically well done! And a bit strange too, I think they're Fortean enough 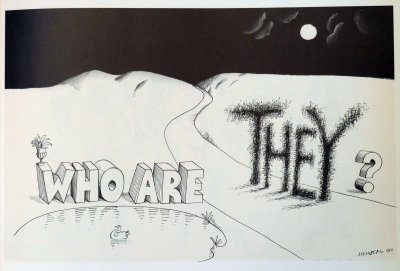 A nice collection of mushroom paintings.
They capture both the mystery and the biology of fungi:
http://uair01.blogspot.nl/2017/06/urban-mushroom-diary-summer-2017.html

^ Mushrooms, as depicted by a painter who has ingested some!^

Apologies if there's already such a thread. I couldn't find it in the search function.

I recently went to the CaixaForum in Barcelona, and saw some video art that is surely of interest to Forteans. The artist is called Tony Oursler and the piece (Imponderable) was about ghosts, psychical investigation, witch-hunting, Conan Doyle, and Houdini. It was in 5D, meaning that there were lighting effects as well as a Pepper's ghost screen in front of the main screen, to create the classic 3D theatrical illusion that has such history in the story of paranormal trickery. The style was campy and B-movie-ish. I loved it. Here's an excerpt:


Tony Oursler's Imponderable (2015-16) offers an alternative depiction of modernism that reveals the intersection of technological advancements and occult phenomena over the last two centuries. Presented in a "5-D" cinematic environment utilizing a contemporary form of Pepper's ghost-a 19th-century phantasmagoric device-and a range of sensory effects (scents, vibrations, etc.), Imponderable is an immersive feature-length film inspired by Oursler's own archive of ephemera relating to stage magic, spirit photography, pseudoscience, telekinesis, and other manifestations of the paranormal. Drawing on these objects, Imponderable weaves together a social, spiritual, and empirical history of the virtual image that overlaps with the artist's own family history. A cast of characters including Sir Arthur Conan Doyle, Harry Houdini, Mina "Margery" Crandon, and members of Oursler's family are portrayed by an eclectic ensemble of artists, musicians, and performers including Kim Gordon, Jim Fletcher, Keith Sanborn, and Constance DeJong. Bringing together Oursler's ongoing interest in mysticism, psychedelia, popular culture, and media history, the work employs macabre humor and theatrical surrealism to reflect on the irrational relationship between belief systems and the authenticity of images. Imponderable is presented in conjunction with selections from Oursler's archive relating to the film.
Click to expand...
Other work by this artist concerns UFOs and science fiction themes.

Now, this is contemporary art, which isn't everyone's favourite thing. However, there is a lot of Forteana in the art world, from haunted paintings to the use of automatic writing by the surrealists—not to mention work with Fortean themes. Let's hear about it!

Wrote a bit on this in an essay on Humanism in my literature studies last century. Very interesting details with a quite subversive interpretation.

From an Amazon review of John Carroll's Humanism:
The presentation is based on close analysis of literary and artistic works: Holbein's Ambassadors (on the cover) as a representation of the failure of Renaissance humanism, Vermeer's interiors as a depiction of Puritan domestic inwardness, Cezanne's landscapes as a last-ditch attempt to save natural order, and so on. 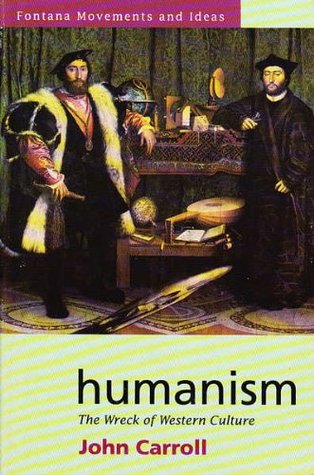 Humanism: The Wreck of Western Culture
by John Carroll

Part of the "Paladin Movements and Ideas" series, this book takes the opposite view of the claim that scientific humanism is the pinnacle of human civilization, and traces an alternative record of humanism's effects and failures.


Must get hold of the revised version:
The Guardian newspaper says it's "overblown,utterly misguided, sometimes downright dangerous, not to mention half-crazed, but important and at times brilliant."
Last edited: Aug 31, 2017

I studied Surrealism closely in 1994 in both visual arts and literature. Some of those I got to know a little bit about.

James_H said:
Apologies if there's already such a thread. I couldn't find it in the search function. ...
Click to expand...
It's best to use Google (with 'site:forteantimes.com') for results based on short words like 'art' and results that include items that have gone MIA from the board's resident search index / database.

The most general art thread would be:


There are 2 threads specifically dedicated to modern art and its value / validity:

A Pile of Bricks? The Modern Art Thread
http://forum.forteantimes.com/index.php?threads/a-pile-of-bricks-the-modern-art-thread.13505/


This thread is a sort of compendium of things outside the art world mainstream:


... And there are lots of threads addressing specific artists and / or artworks - for example:

Artworks that Predict the Future
http://forum.forteantimes.com/index.php?threads/artworks-that-predict-the-future.53665/

EnolaGaia said:
Fortean Art
http://forum.forteantimes.com/index.php?threads/fortean-art.2166/
Click to expand...
Thanks, I believe this is what I've been looking for!

I'm so in love with these paintings I want to marry them. 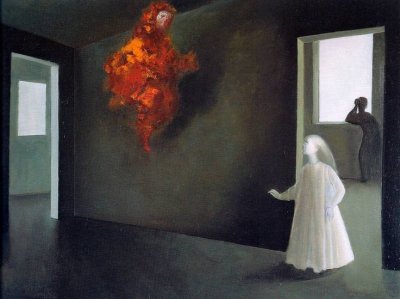 For this feature, we set our writers a brief: write about the most disturbing music you own, or have ever heard. The responses were varied. 'Disturbing' is a broad term, and the resulting 40 pieces of music, compiled below, plumb all manner of darkness.

One of the best true works of cinematic genius. This NZ artist was given a few metres of celluloid leader in the 50s and etched this film onto it with a fucking pin. Don't accept any substitutes. This is the best original excerpt that is available on Youtube. I've seen an original reel projected on a cinema screen from the personal collection of a famous Australian film producer and the effect is incredible. Blew my mind. Wish I could share the experience.

A small but interesting urban intervention. I drove out this morning but failed to catch the artist in the act:
http://uair01.blogspot.nl/2017/09/harmen-de-hoop-retrospective-3.html

uair01 said:
A small but interesting urban intervention. I drove out this morning but failed to catch the artist in the act:
http://uair01.blogspot.nl/2017/09/harmen-de-hoop-retrospective-3.html
Click to expand...
I could use a couple of bench vices, actually.

I can see the concept. There's art in the audience's reaction, not just the conversion. I like it.

skinny said:
I could use a couple of bench vices, actually.
Click to expand...
There's the problem.
Sooner or later, someone will nick those vices.

Orbital Reflector is a satellite that will have no commercial, military, or scientific purpose. Instead, it will be a public sculpture, visible from the ground without a telescope -- a satellite that belongs to everyone.
A

Mythopoeika said:
^An odd idea.^
Click to expand...
uair01 said:
A small but interesting urban intervention. I drove out this morning but failed to catch the artist in the act:
http://uair01.blogspot.nl/2017/09/harmen-de-hoop-retrospective-3.html
Click to expand...
Philistine that I undoubtedly am, I'm still going with:

Just a few cat pictures. Seen today in the museum: Orbital Reflector is a satellite that will have no commercial, military, or scientific purpose. Instead, it will be a public sculpture, visible from the ground without a telescope -- a satellite that belongs to everyone.
Click to expand...
Cor .. this is going to throw the cat amongst the pigeons with the flat earthers .. satellites don't even exist according to them ..

Amazingly, I'd never heard of Marian Spore Bush and her paintings before today -
https://en.wikipedia.org/wiki/Marian_Spore_Bush Marian Spore Bush
Click to expand...
(October 22, 1878 – February 24, 1946) left her successful Michigan dental practice for a studio in Greenwich Village, New York City, and became a self-taught painter in the 1920s. She claimed her large surrealistic works were inspired by long-dead artists who were communicating with her from "beyond the veil." Her predictions of the future, her unusual artwork, her work with the poor in New York City's Bowery, and her eventual marriage to Irving T. Bush incited much interest in the national press
Click to expand...
Her work could be both outsider art and surrealism, but
I think the "communicating with dead artists from beyond the veil" bit puts her smack into the Fortean category.

Valuable contributions to the field of human endeavour. Except the air sex - which I can imagine being quite funny, I suppose.

I'm sure I remember a plant/synth interface on Tomorrow's World many years ago. But nothing it produced could realistically be described a music IIRC.

A bronze bust of Marx smothered under a huge balloon, carrying a tiny castle with the banner "Festival of progress".
It's weird art. But I'm not bashing it, I actually like these WTF experiences ... how could someone devise a juxtaposition like this It's this exhibition: http://www.wdw.nl/en/our_program/exhibitions/goshka_macuga_amp_ahmet_t_episode_2
The text doesn't clarify anything. The art is more fun as is. For example, only after looking at the photograph I realized this MUST be an artwork: They were probably sitting in their studio one day and looked at all the crap they had lying about. Then they probably started randomly putting stuff together. It was a way of clearing out the ol' storage space.
You must log in or register to reply here.
Share: Facebook Twitter Reddit Pinterest Tumblr WhatsApp Email Link
Top