Are you a SGU fan?

Doing a what now?

Sorry it was cause of your name my bad

Shady said:
Sorry it was cause of your name my bad
Click to expand...
What about the voice of Geddy Lee
How did it get so high?
I wonder if he speaks like an ordinary guy?
(I know him and he does)


Geddy Lee being a member of Rush, a band of whom I suspect the poster formerly known as Duane Pipe is a fan.

Shady said:
You have to share a place with a stranger, you should be able to stipulate whatever terms you like
Click to expand...
Sure, it's only polite to let them know what sort of nutter they had a lucky escape from. I'm agreeing with you Shady, but discrimination based on something as arbitrary as Star Signs I'm sure is a something bad ending in "ist". My friend on Facebook posted that she wouldn't date anyone with the same Star Sign as her Ex (and most of her female friends agreed with her).
I then realised that I knew six Aquarian females at Work (University Techs) but I don't know any other Aquarian male - there should be different horoscopes for male and females, we're not the same at all.

I recommend the episode of 'The Orville'...."All the world is a birthday cake" (Season 2 Episode 5).
The Orville detects a signal from Regor 2, a planet searching for other intelligent life in the universe, and initiates first contact. The Regorians welcome Ed, Kelly, Claire, Bortus, and new Xeleyan security chief, Talla Keyali. However, when it is learned that both Kelly and Bortus have birthdays in a few days, the Regorians denounce them as "Giliacs," people who are predisposed to violence. They are immediately sent to a Giliac internment camp. Kelly assists a Giliac give birth to a non-Giliac infant that is later removed from the camp. Claire deduces that Regorian culture is based around astrology; Giliac is an astrological sign and all born under it are considered violent criminals. Talla correctly hypothesizes the origin of the Giliac stigma: a star in the Giliac constellation collapsed into a black holemillennia earlier and the star's disappearance was interpreted as a bad omen. John deploys a solar reflector that appears as the star when viewed from the planet. With the star's apparent resurgence, Giliacs are no longer considered inherently dangerous, and Kelly and Bortus are released before their scheduled execution.

There then ^ solves the problem maybe

It is a daft thing, i dont believe in horoscopes, I am a Virgo, and you should see the state of my place sometimes lol

As if the placement of planets and other heavenly bodies etc could possibly have even the slightest bearing on ones daily life, what a load of nonsense. I mean, it's about as scientific as chiromancy, feng-shui, crystal healing and homeopathy !
But then that's us Taureans, naturally cynical.......

"Polish politicians and artists have taken to social media to protest a decision to remove an artwork depicting a woman eating a banana from a leading national gallery. "

ramonmercado said:
Granny who told grandkids about feeding corpses to pigs arrested after third husband’s scalp is found
https://metro.co.uk/2019/05/01/gran...article.desktop.share.top.twitter?ito=cbshare
Click to expand...
She must have read Robert Picton's notes.

brownmane said:
She must have read Robert Picton's notes.
Click to expand...
Or saw that scene with Brick Top in Snatch.

Mythopoeika said:
Or saw that scene with Brick Top in Snatch.
Click to expand...
I saw Snatch many years ago. Didn't remember that. Lol

brownmane said:
She must have read Robert Picton's notes.
Click to expand...
@brownmane or Pearl's before swine...

Remember when Madonna adopted an unfeasibly cute baby from Malawi? Well he is now 13 and..

Woman tried to trespass on CIA grounds while asking to speak to 'Agent Penis', police say

@Yithian maybe she was looking for tricky dicky..hang on theres a tap at the door...

ramonmercado said:
Granny who told grandkids about feeding corpses to pigs arrested after third husband’s scalp is found
https://metro.co.uk/2019/05/01/gran...article.desktop.share.top.twitter?ito=cbshare
Click to expand...
I heard from members of my family who were living in rural South West France, about someone feeding a baby to a pig they had in a pigsty in their small farm. The woman who had the baby, according to our sources, was a bit dissolute and mentally ill. She went to prison. Gruesome to the extreme, methink!

ramonmercado said:
Granny who told grandkids about feeding corpses to pigs arrested after third husband’s scalp is found
https://metro.co.uk/2019/05/01/gran...article.desktop.share.top.twitter?ito=cbshare
Click to expand...
Have they found the scalps of the previous two?

Min Bannister said:
Remember when Madonna adopted an unfeasibly cute baby from Malawi? Well he is now 13 and.. 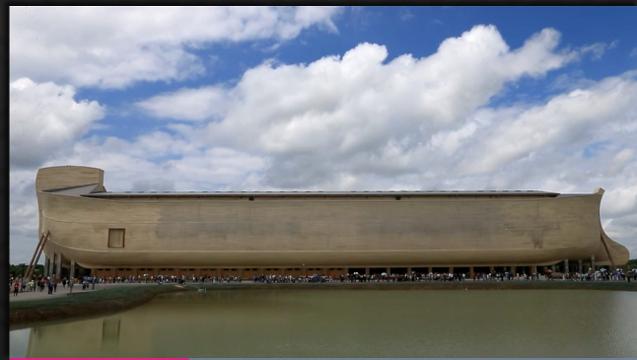 The Ark Encounter confirms beliefs to some in Williamstown as others protest the message and tax use of the $100 million dollar wooden edifice.
MATT STONE, THE CJ
The owner of the life-size replica of Noah’s Ark in Northern Kentucky has sued its insurers for refusing to cover rain damage.

Ark Encounter, which unveiled the 510-foot-long model in 2016, says that heavy rains in 2017 and 2018 caused a landslide on its access road, and its five insurance carriers refused to cover nearly $1 million in damages.
In a 77-page lawsuit filed in U.S. District Court, Ark Encounter asks for compensatory and punitive damages.
The ark itself was not damaged and the road has been rebuilt, according to the suit.