And I also seem to remember reading about massive ice & straw container ships, perhaps in WW1 maybe even through until WW2.
Click to expand...

You're thinking of Pykrete (aircraft carriers) thought up by Geoffrey Pyke. in the 2nd WW.

Mr_Nemo said:
You're thinking of Pykrete (aircraft carriers) thought up by Geoffrey Pyke. in the 2nd WW. ...
Click to expand...

Though it's been occasionally mentioned on the forums, there's no substantial FTMB thread on this project, but you can learn more at:

http://www.thewarillustrated.info/230/strange-story-of-hms-habbakuk.asp (Reprint of a 1946 article)

We now have a thread dedicated to Project Habakkuk:

... includes the following bit about his views on Project Habakkuk ...

... Many parties were involved and Charles was unable to get the project stopped although in due course it was abandoned. His letter to The Times of 7 April 1951 not only sums up the story but reveals his sense of humour as well:

'Sir—Readers of The Times of 29 March vlll have been amused by Lord Mountbatten's story of Pykrete, but they may not know that this story, like many comedies, had a serious side. The stimulus of the war brought out the inventive genius of our race with full force. Not unnaturally, some of the ideas put forward lacked the elements of soundness desirable before our scarce man-power should have been dlverted to thcir development. One such idea was to build an aircraft-carrier out of ice, big enough to take a large part of the Royal Air Force down to an unprotected part of the French coast to cover a first landing on the Continent. Its size was to be five to ten million tons and of a draught of about 125 ft. It was to be externally insulated and fitted with a refrigerating plant equal in power to the Battersea power station, and also would be self-propelled.

'This idea, the code name of which was HABAKKUK, would have gone the way of most of its type, if for no other reason than the fact that ice was about one hundred times weaker than that required simply to prevent the break-up of such a structure in the Atlantic swell. Unfortunately, it was found that the strength could be increased twenty times by incorporating in the water, before it was frozen, a high concentration of the wood pulp that is used for making newsprint. This material became known as Pykrete and in addition to its strength had the amusing and spectacular properties described by Lord Mountbatten. The tragedy is that these demonstrations sold what was patently an absurd scheme at a very high level and resulted in the diversion of some millions of man-hours of allied effort before the scheme was quietly allowed to die by our American friends. Serious though this loss was, our language became the richer. For the remainder of the war the "micro-habakkuk" became the measure of unsoundness of certain inventions, the "micro-" being introduced to avoid decimals.
Click to expand...

There's a nice big photo of Whitby Abbey in today's Telegraph, with the news that it will be lit up for Halloween.

escargot1 said:
There's a nice big photo of Whitby Abbey in today's Telegraph, with the news that it will be lit up for Halloween.
Click to expand...

I've explored that abbey at night. We shouldn't have been there, but couldn't resist. Nothing strange occurred, but it was peaceful.

We were just at Whitby a couple of weekends ago!

To answer some of the things earlier in this thread. There are a couple of bottle windows that are easy to view elsewhere in Whitby. We saw them on the open topped bus tour but I am not exactly sure where. I am sure the route could be followed on foot so these can be viewed for people who don't want to pony up for the tour.

Tourism was massive but I didn't get the impression much of it was to do with Dracula although there is some of course. The majority seemed to be to do with its location as a pleasant seaside town with a magnificent beach, boat trips, rock and terrifyingly huge seagulls. We were asked a lot if we were here for the day (my husband has an accent that could pass for Yorkshire). Few goths were to be seen so it was mainly just us, daytrippers and half the population of Germany (for whatever reason). Goodness knows what it is like in August.

The abbey was beautiful and very atmospheric, even on a warm sunny day. The museum was brilliant, loads of interesting stuff there and we loved the tempest prognosticator! We went on a ghost walk that should have come with a large pinch of salt but which was very entertaining. The Captain Cook museum was also well worth a visit. Oh, and if you REALLY want to be scared, visit the lifeboat museum. Proper underpant changing stuff.

Cool place to visit, lots of Fortean stuff, people helpful and friendly wherever we went. Recommended.

JamesWhitehead said:
...I recall the giant jaw-bones that formed a gateway to a park(?)
Click to expand...

I've just caught a bit of 'The Mystery of Rome's X Tomb' on BBC Four On Demand.

A previously unknown tomb was excavated and found to contain over 2,000 skeletons. They wore jewellery including a ring made from jet - a substance believed by the Romans to hold magical powers - which was proved by chemical analysis to have come from Whitby in the 3rd century AD.

Went down to Whitby on the 29th Oct. Got a shot of the Bram Stoker plaque - 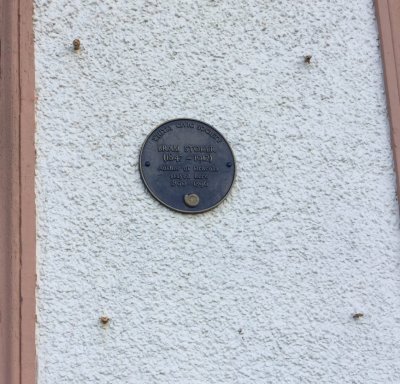 and this is the view from the front door. 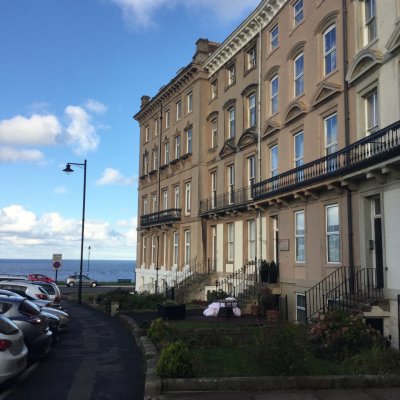 Not far away from here are the whalebone arch and Captain Cook. The building behind the arch is the Royal Hotel, an enormous place. The patrons in the bay window all looked like they were about a hundred years old and trapped inside. A rest home for vampires with the Christmas trees up already. 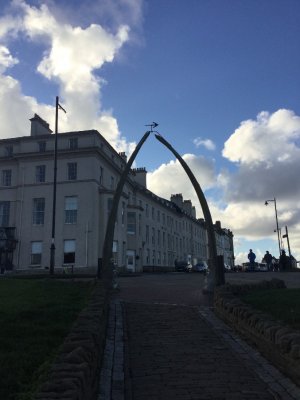 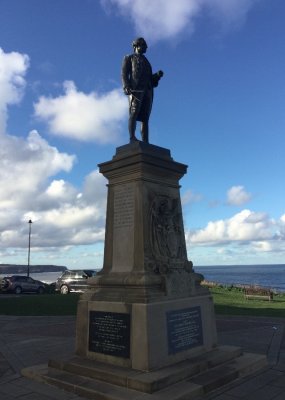 Headed for the Abbey, this is about a third of the way up the 199 steps. 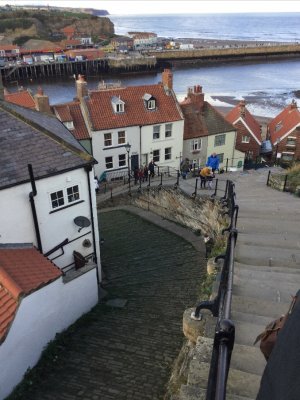 Saw a few carved grotesque heads in the Abbey. 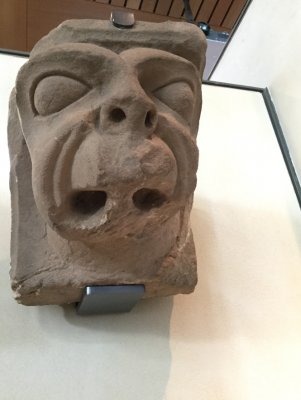 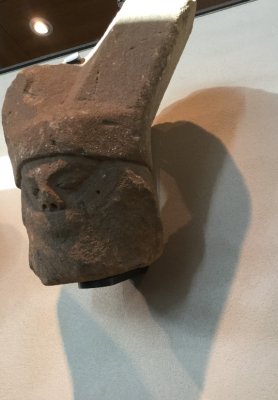 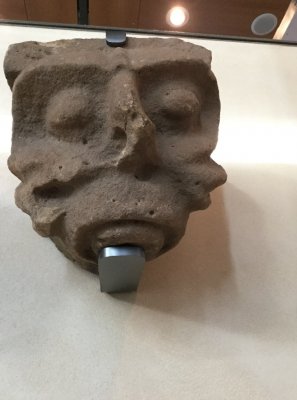 In the grounds I tried to get a shot of a goth because her hair was yellowy green but instead ended up with this superb orb. 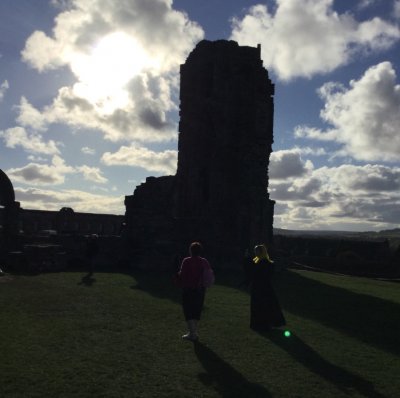 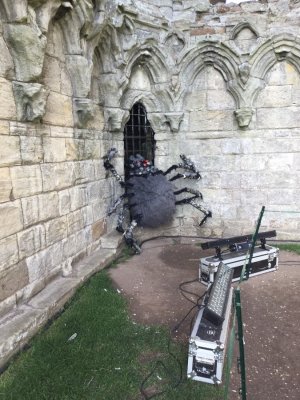 They were setting up the ruins for some kind of light show, that’s the reason a lot of things were cordoned-off. 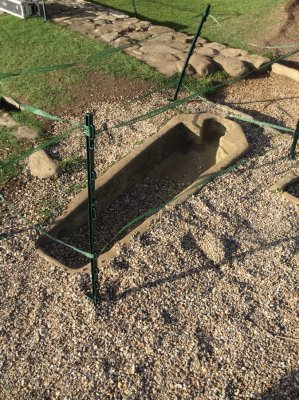 Couldn't get in my usual accomodation this time, on the plus side I had this interesting find while looking for where I'm staying.

Carved into the pavement just before the roundabout at Bagdale, if you're alking out from town past the train/coach station. 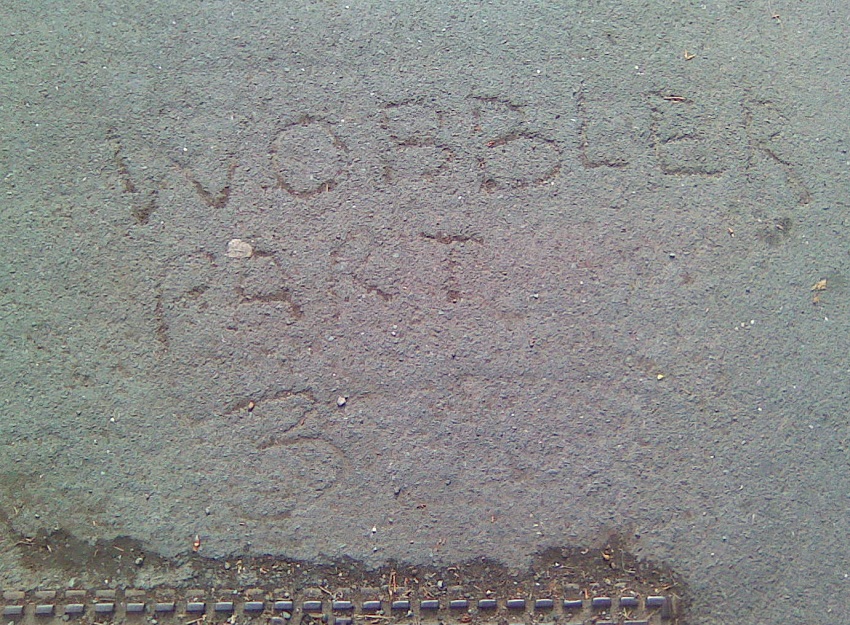 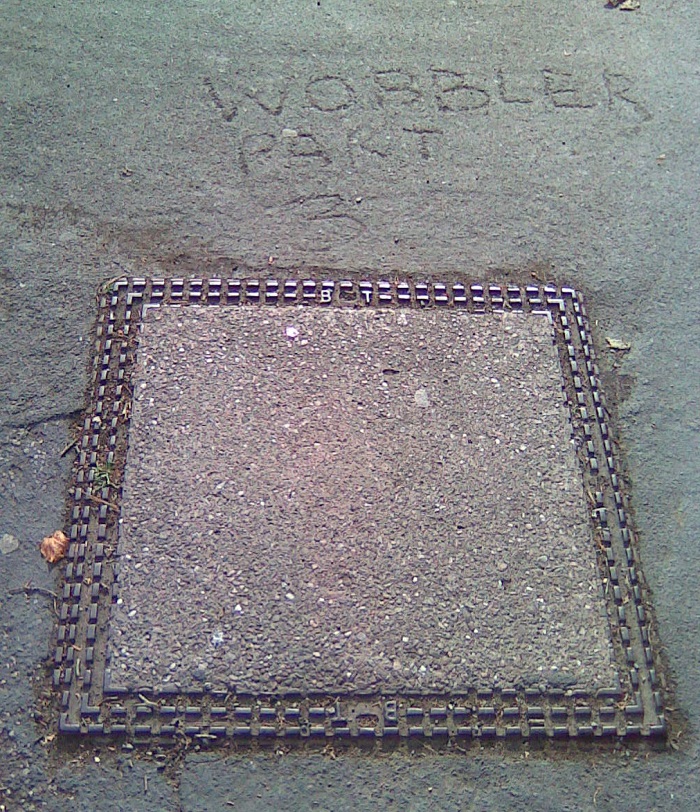