I don't know if anybody is interested but I have heard of Fort's one published novel, and, oddly enough, i just found it. On the internet: http://www.resologist.net/ocmei.htm

I'm a little bit too tired to read it now but I may do, and before i do can someone tell me if it is outstandingly bad or anything?

I haven't read it, Faggus. But it's nice to know that Mr. X is back
online. His resologist site tends to come and go. So, if you want
to read the book, I suggest you download it while you can.

I think it is generally felt that Fort found his forte by inventing his
own weird genre. But it would be interesting to read some of his
fiction.

they also have his short stories
A

Surely all of Fort's works are fiction

Iankidd said:
Surely all of Fort's works are fiction

Click to expand...
On second thought, if fiction is an escape from and development of reality (fact) then fact and fiction become one, since we can't tell fact from fiction.

#6
While Charles Fort is known in paranormal circles for his sometimes speculative writings about the 'unknown', Fort's literary work deserves greater academic consideration than it is currently getting. Fort's novel "The Outcast Manufacturers" was released in 1909 to general puzzlement from both the critical community and the reading public. Little wonder, I say. If one is expecting Henry James or Edith Wharton here, you have clearly come to the wrong place. However, an artist's work should be considered in relation to his/her intentions. One doesn't blame Margaret Atwood for not writing like Norman Mailer and so forth.

"The Outcast Manufacturers" is, in fact, a novel that was both of its time and way ahead of its times. On the one hand, the novel is a sometimes black parody of the Horatio Alger luck-and-pluck novels of the day. A young man comes to the big city in search of his fortune and so forth. The blackness of his parody is more late twentieth century than early twentieth century in its spirit. The novel is also a familiar specimen of a very common American literary sub-genre - dialect humour. Fort's ear for dialogue and dialect in this novel is nearly faultless. Much of the humour of this novel derives from Fort's way with dialogue. Try reading some of it aloud. It's uproarious. In its gentler moments, the dialogue here sometimes reminds me of Augustus Baldwin Longstreet, a writer I assume Fort was not familiar with.

Simultaneously, "the Outcast Manufacters" is - way ahead of its time in this - an exploration of metaphysical and existential absurdity, foretelling some of the aesthetic directions Samuel Beckett and Eugene Ionesco would go later in this century. Towards the end of the novel, Fort seems headed towards a very bleak Beckett-like grim ending, milking the narrative situation for all its black humour. Incredibly, at the last minute, the novel concludes with a genially comic ending that is (and I mean this literally) straight out of Gogol or Goncharov. The narrative and descriptives passages also seem to reflect a kind of fractured imagism, as it were.

"The Outcast Manufacturers" is an astonishing literary performance that demands, and would reward, serious academic study. Let us remember that such luminaries as Theodore Dreiser, Booth Tarkington, and Ben Hecht were all Fort enthusiasts. The Dodo Press reprint of the novel would need some tidying up for an academic edition. There are some typos and Fort always had at the best of times an eccentric way with punctuation. An editor should dress the book up in its best Sunday suit and tie, so to speak. A verbatim text could be produced if there were an academic demand for it. Dreiser was very enthusiastic about Fort's short stories.

Someone has heroically posted most of Fort's stories on the Internet. Well done. Nevertheless, call me old-fashioned, but I like something I can hold in my hands. A formal book collection of Fort's short stories would encourage both popular and academic interest in this side of Fort's personality. Fort also wrote nine other novels, all unpublished. The oddity of the first novel no doubt did not encourage publishers of the day. Are they preserved in manuscript form? I think it would be well worth investigating. Possibly some of them, with a bit of tidying up, could be published. I sincerely hope both general readers and academics take note of this posting. There is pleasure to be had in Fort's creative works and there is also serious academic work to be done. Speaking subjectively here, I genuinely love "the Outcast Manufacturers" as a proto-absurdist dialect novel and a 'black' Horatio Alger satire. As with all kinds of love, I hope other people see the positive attributes of the object of my love. And I hope some people will rise to the academic challenge.

A somewhat . unusual story, which is quite as likely to repel as to attract the average reader. Is Charles Fort's " The Outcast Manufacturers,". (B.. W. Dodge &amp; Co., $1.50.) - It is a vivid picture of a sordid and unpleasant phase of life, real-latia ln-the-lt -dgrv though- not con cerned with matters where raH sometimes called Immorality. A few months ih tife career of a mall-order company is shown; its office is in a tenement, and the shiftless life of the crowded district is set forth with a great deal of skill, The characters are developed, by means of dialogue almost exclusively therej re scarcely five pages of description in the book, and these passages are the least satisfactory, being written In a deliberately choppy style which Irritates, while It gives impressionistic pictures of the turroundlngs of the protagonists. . The dialogue is unusually clever It reads like a transcription from Mt and Is permeated with a certain grim humor, Mr. Fort is, evidently, a new writer; he has power and Insight, but, as yet, scarce, ly sufficient artistic balance to give his study of slum life any real value as literature. 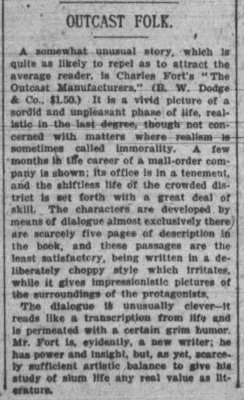 An edited reconstruction of The Outcast Manufacturers can be accessed online at: