The time of year when you can see fungi in the city. They're weird enough as-is, but in the city they look weirder and more out-of-place. 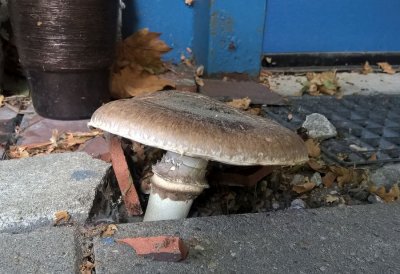 In a parking garage (Agaricus sp.) Near the road (Agaricus sp.) 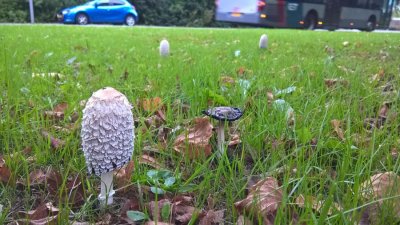 Near the road (Coprinus comatus) 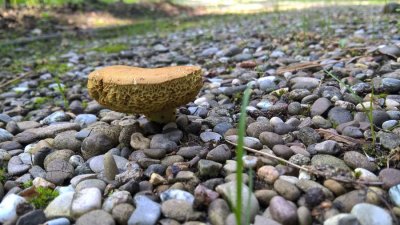 In a graveyard (Boletus sp.) 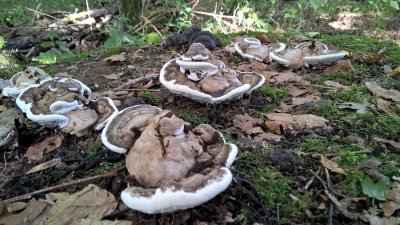 Edible boletes in the city park: 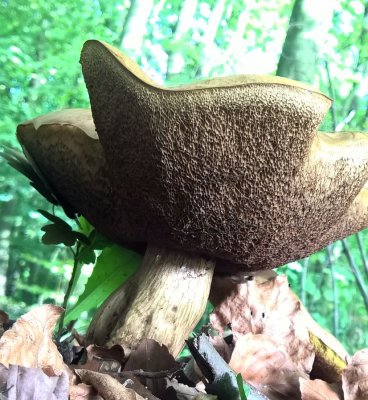 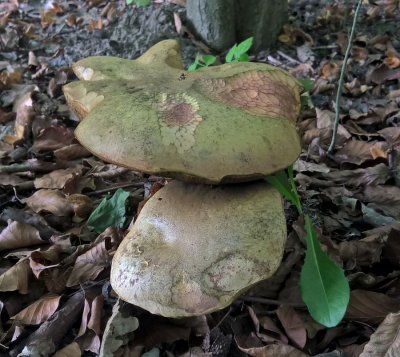 fluffle9 said:
hahahaha. good call - didn't think of animals myself, being a vegetarian. doesn't squid require an awful lot of beating to make it edible, or is that octopus? because on a 7m squid that might take a while.
Click to expand...

Squid (calamari) is a bit of a pain to clean, but no beating or tenderizing needed here. It's absolutely delicious when stewed in a well seasoned tomato sauce or dipped in eggs and coated with seasoned bread crumbs then pan fried (not deep fried).
Octopus IMO is tough and chewy and not at all tasty. I've have it had stewed and in salads must be an acquired taste (a bit fishy). Squid has no fishy taste.

uair01 said:
in the city they look weirder and more out-of-place.
Click to expand...

I saw your second photo there as a tortoise! :sherlock:

Police are hunting a thief who stole a rare and highly sought mushroom which is said to alleviate the symptoms of dementia.

Three of the legally protected ‘bearded tooth fungi’ specimens were sliced off trees in the New Forest, in the latest theft of the mushroom in the area.

The fungi’s scientific name is Hericium erinaceus, but it is also commonly referred to as ‘Lion’s mane fungi’ because of its flamboyant long spines that look like a shaggy mane. ...
Click to expand...

On 9 December we got (at least) three fairy rings (mushroom circles) in our suburban lawns. I still have to determine the species. I guess Hebeloma and Pholiota. Also clusters (not rings) of Hypholoma and Coprinopsis, these are common mushroom weeds. 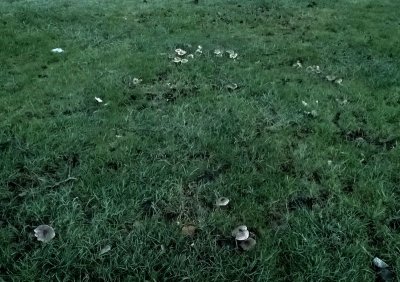 Britt Bunyard, the founder, publisher, and editor in chief of the mycology journal Fungi, has tasted a death cap. “Very pleasant and mushroomy,” he told me. “A nice flavor, and then you spit it out.” For the amatoxin poison to begin to work, it needs to enter the intestinal tract. A quick bite without swallowing has little effect.

Amanita phalloides are said to be quite tasty, and a person who eats one could feel fine for a day or two before illness sets in. The poison is taken up by the liver cells, where it inhibits an enzyme responsible for protein synthesis; without protein, the cells begin to die, and the patient may start to experience nausea and diarrhea—symptoms that can easily be attributed to general food poisoning or other ailments. “If the patient doesn’t realize the connection, doesn’t see the illness as a result of eating a mushroom a day or two earlier, it’s a hard diagnosis,” said Vo.

“Because the mushrooms don’t taste bad, they’re probably not meant to be poisonous to ward off being eaten or foraged,” Bunyard said. “Mammals, not even all mammals, are the only ones affected. Some squirrels and rabbits can eat them without being harmed. Why it’s so toxic to humans—who knows? Some poisons are used as communication molecules, and just happen to be poison to us.”

Not all fungi are funny ... Some can seriously f**k up other organisms ...

Drugged, Castrated, Eager to Mate: the Lives of Fungi-Infected Cicadas

Beneath the soil, cicadas wait — as long as 17 years — until the right temperature beckons them to the surface. At once, they emerge, like zombies rising from graves. They greet the sun, preparing to molt into adults in coming weeks and then fly off to mate.

Such is a cicada’s simple life — unless it’s been infected.

Massospora, a parasitic fungus, has lurked just below the surface, awaiting the cicada’s exit. When a nymph digs through infected soil, fungal spores cling to its body. As the cicada matures, massospora multiplies, digesting the insect’s insides, castrating it and replacing its rear end with a chalky white plug of spores.

The cicada buzzes on, seemingly unaware it’s a mushroom’s moving minion. It flies, attempting to mate with unusual vigor. Some males even mimic females to attract and spread their spores to male partners — the more infected, the better. And as their hijacked bodies copulate, spores sprinkle to the earth and massospora spreads.

“This really has all the elements of a sci-fi horror story,” Matthew Kasson, a mycologist at West Virginia University, said.
Click to expand...

If it can be demonstrated this fungus / mushroom really can ease the symptoms of dementia, it will become more valuable than (e.g.) truffles.

Police are hunting a thief who stole a rare and highly sought mushroom which is said to alleviate the symptoms of dementia.

Three of the legally protected ‘bearded tooth fungi’ specimens were sliced off trees in the New Forest, in the latest theft of the mushroom in the area.

The fungi’s scientific name is Hericium erinaceus, but it is also commonly referred to as ‘Lion’s mane fungi’ because of its flamboyant long spines that look like a shaggy mane. ...
Click to expand...

Fungi present in soil of the so-called Golden Triangle Gold Prospect zone of Australia can oxidize the metal, researchers reported May 23 in Nature Communications. The reaction dissolves gold, after which the fungi precipitate the metal on their surfaces, a process that may help move the metal from deeper deposits in the Earth’s crust closer to the surface.

The result represents a previously unknown role for fungi in biogeochemical cycling, Saskia Bindschedler, a microbiologist from the University of Neuchatel in Switzerland who was not involved in the work, tells the ABC. “What I really like about this paper is that it shows that not only bacteria are able to oxidise inactive metals” ...

“Fungi are well-known for playing an essential role in the degradation and recycling of organic material, such as leaves and bark, as well as for the cycling of other metals, including aluminium, iron, manganese and calcium,” coauthor Tsing Bohu of CSIRO tells the Australian Associated Press. “But gold is so chemically inactive that this interaction is both unusual and surprising—it had to be seen to be believed.” ...

“There is an underlying biological benefit from this reaction,” Bohu tells the ABC. “We found gold-loving fungi can grow faster and bigger relative to other fungi that don’t work with gold.”
Click to expand...

EnolaGaia said:
If it can be demonstrated this fungus / mushroom really can ease the symptoms of dementia, it will become more valuable than (e.g.) truffles.

Pretty sure it’s possible to cultivate this species so this could be excellent news (not the wild specimens stolen part of course).

My bff is about to try shrooms for the first time alone at his home on a Friday night in winter. I'm not sure it's a good idea. If he has a blowout, he's got nobody to buddy for him. I'm staying online on gmail chat but I'm a long way away and have kids with me. Hope he doses conservatively. He's all "well I tried acid and ecstasy and they were fizzers so I'm not expecting anything dramatic". Famous last words.

I've given him this guide, but it's for those sympathetic to magic ritual and with a respect for the mushroom as a sentient entity in its own right. He's definitely hard materialist science, but he said he got some good tips out of it.

How a mushroom grows in one day. This is "Cerioporus squamosus". Smells unpleasant (I thought "bitter almond", book says "watermelon rind") but should be edible when young. I will not try it.
https://en.wikipedia.org/wiki/Cerioporus_squamosus 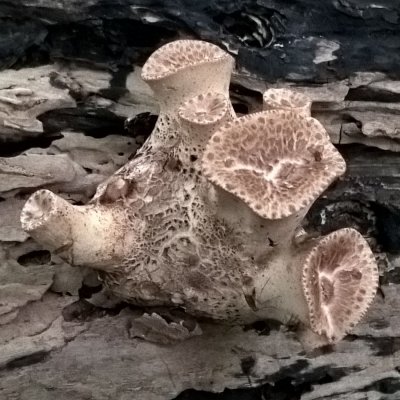 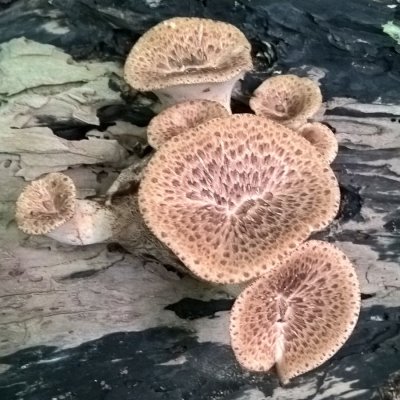 uair01 said:
How a mushroom grows in one day. This is "Cerioporus squamosus". Smells unpleasant (I thought "bitter almond", book says "watermelon rind") but should be edible when young. I will not try it.
https://en.wikipedia.org/wiki/Cerioporus_squamosus
View attachment 19316View attachment 19317
Click to expand...

Twas a fizzer. Not even a burp to write home about. Now he's assured himself he's Captain Constitution, all caution shall be cast aside forthwith and I expect we'll be meeting by the tummy pump.

Not a good year for urban mushrooms. I've seen very few yet. And only in the places I already know.
(Leccinium duriusculum, Agaricus bitorquis, Inocybe sp. (?), Cerioporus squamosus)
Have you seen anything? 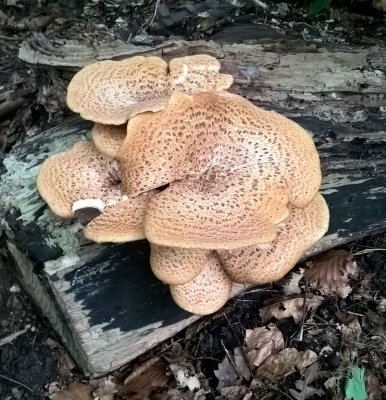 Artomyces pyxidatus. Seen in the city park, on the same dead tree as last year. This year it's even bigger and more beautiful.
The Dutch map says it's very rare. https://de.wikipedia.org/wiki/Verzweigte_Becherkoralle Along the lines of an old tree root these mushrooms grow in our back garden every year: View attachment Garden mushrooms1 low.jpg

Spudrick68 said:
Along the lines of an old tree root these mushrooms grow in our back garden every year
Click to expand...

makes me want to do something textile!

Frideswide said:
makes me want to do something textile!
Click to expand...

Then be amazed at this Aren't they gorgeous?

One of the world's deadliest fungi has been discovered in Australia's far north for the first time - thousands of miles from its native habitat in the mountains of Japan and Korea.

The Poison Fire Coral fungus was discovered in a suburb of Cairns by a local photographer and subsequently identified by scientists, James Cook University announced Thursday.

Several people have died in Japan and Korea after mistaking the bright red fungi for edible mushrooms that are used in traditional medicine, and brewing it into a tea.

Poison Fire Coral is the only known mushroom with toxins that can be absorbed through the skin, and causes a "horrifying" array of symptoms if eaten, including vomiting, diarrhoea, fever and numbness.

maximus otter said:
toxins that can be absorbed through the skin
Click to expand...

Its a delicacy in Cromer.

Since it shrinks the brain it has obviously been consumed by the politicians of the political parties I don't like.

Looks vaguely like the "metal music devil horns" handsign, which seems appropriate for some super toxic thing that causes death.