Police are investigating an intentional chlorine leak that sent 19 people to the hospital and prompted evacuation of thousands of attendees of the Midwest Fur Fest, an Illinois convention of fans of “anthropomorphic animals”.

In less than half an hour the entire Hyatt Regency hotel was evacuated following a 9-1-1 call at 12:45 am local time.

At the scene, the first responders determined that a container with a chlorine-containing chemical was broken at the 1,100-room hotel located in Rosemont, near Chicago.

Firefighters discovered the broken container in a stairwell on the 9th floor. Rosemont Police Department said the powered chlorine was released “intentionally” and the incident is being investigated. ...

I love the picture they've ran the story with... it's almost like something out of The Abominable Dr Phibes:

For context, there's quite a long standing tradition in the so called kink community of people doing their best to vandalise each other's events, usually but not always for financial reasons.

A matter of opinion I suppose whether you regard furries as kink, at the least there's definitely some crossover.

It would certainly be a new extreme, the way things have been going the last few years though... who knows.
D

Heard about this. Thank God it was only chlorine gas, and not something more exotic. With chlorine at least you have some chance to run.
Maybe some of their costumes acted like partial gas-masks, if they're the kind with black cloth mesh to see and breathe through.

(There's an agricultural anhydrous ammonia storage facility about a quarter mile from here, one day I was outside when a valve on a tank ruptured. First you can't breathe, then you can't see. I managed to get inside the garden shed, even so my eyes and throat were burned for a couple weeks. Chlorine is probably much worse.)

"Furries", as these perverts are called, are despised by everyone on the internet (except for fellow-furries) and would be the first to protest at the sexual labelling of their "lifestyle". This is despite the fact that most (nearly all) of them do indeed practice "yiffing" and that there are fractally-nested recursions of perversion within their community (such as "babyfurs").
Click to expand...
Oh FFS Garrick. Not all furries are perverts any more than you always post argumentative and ill considered garbage - though I could be wrong about the latter. On any other board you would be called the resident troll. Your blanket condemnation reads either like the ravings of a prude or someone who has got the info from old CSI episodes.

Note I am not and have never been a "Furry" although 30 years ago I did indulge in a little of what is now called Cosplay at Sci-Fi conventions and for your information Cosplay of any sort was always an excuse to break the bounds. I'm sure you will find an excuse to argue back but I am content to let any further words you have on the subject condemn you without response.

At around 12:40 a.m. on December 7th, 2014, the Hyatt hotel in the suburban town of Rosemont, Illinois, was evacuated after a high level of chlorine gas was detected on the ninth floor of the building. According to the Rosemont Police Department, the nature of the incident seemed to be an “intentional act,” as the source of the gas was subsequently identified as a pile of powdered chlorine placed in a stairwell on the ninth floor (shown below).
Click to expand...
And just to see if we can now post animated gifs:


Click to expand...
(That scene is furry-related, sort of.)

Axio Wolf's yoochube channel, which gives some 'live' coverage from this event as it happened.

One doesn't really get the impression anyone was taking it too seriously.

Ziya Tong ‏@ziyatong 18h18 hours ago
Culture shock much? Some Syrian newcomers are staying at a hotel where the #VancouFur furry convention is going on. 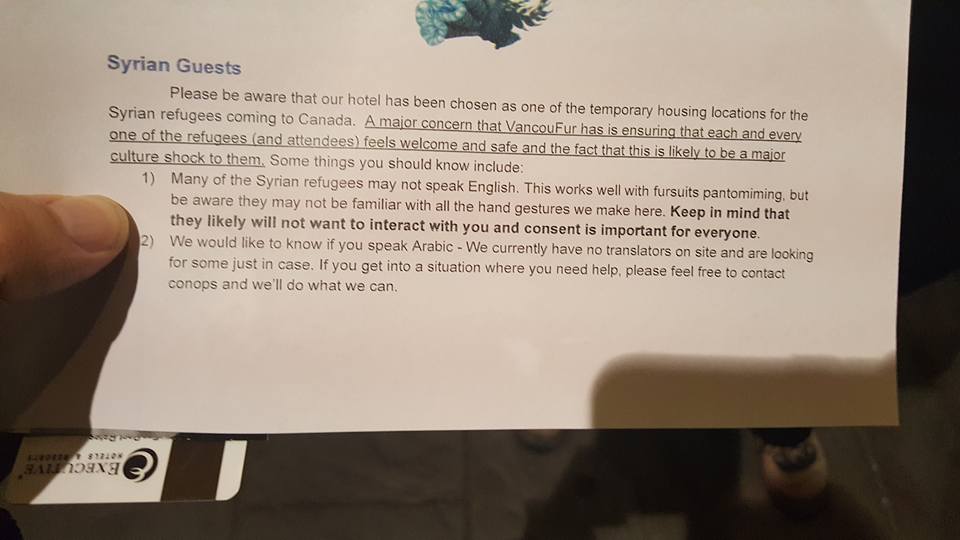 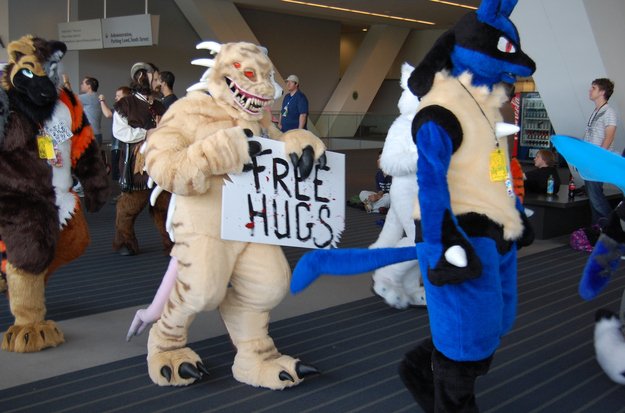 ramonmercado said:
Ziya Tong ‏@ziyatong 18h18 hours ago
Culture shock much? Some Syrian newcomers are staying at a hotel where the #VancouFur furry convention is going on.

Click to expand...
You couldn't make it up could you? .. hopefully nothing will go wrong because that would make a brilliant film ...

Swifty said:
You couldn't make it up could you? .. hopefully nothing will go wrong because that would make a brilliant film ...

Click to expand...
I'm sure a lot of the kids would love the furries!

Awwww .. no one tried to blow anybody up and the Syrian kids loved the Furries ... John Lennon would be proud.

I knew the kids would get on well with the furries.

Try as I might to be open-minded, I just don't think I would feel comfortable allowing my children near a grown man who gains pleasure from wearing a puppydog costume.

At least four people involved in a California triple murder are members of the local “furry” community, meaning they attend group events dressed in elaborate animal costumes. Police found the bodies of Jennifer Yost, 39, her 34-year-old husband Christopher Yost and their friend Arthur Boucher, 28, at the Yosts’ home in Fullerton near Anaheim last weekend.

Frank Felix, 25, and 21-year-old Joshua Acosta have been charged with the murders. The Yosts and the two suspects were all believed to be keen “furries”, as is Katlynn Goodwill Yost, Jennifer Yost’s 17-year-old daughter from an earlier relationship. Friend and fellow furry Melinda Giles told the Associated Press that Jennifer Yost told her she had forbidden Felix from seeing Katlynn, “to protect her daughter”.

Police were called to the home on Saturday morning by the Yosts’ six-year-old daughter, who was found unharmed with her nine-year-old sister. The victims had all been shot to death. Katlynn Yost was reported missing, but after Felix and Acosta were arrested on Sunday, police also announced she had been located safely – and that a 17-year-old girl was in custody. Police declined to name the arrested teenager because she was still a juvenile. ...

Dr. Porhoët said:
Try as I might to be open-minded, I just don't think I would feel comfortable allowing my children near a grown man who gains pleasure from wearing a puppydog costume.
Click to expand...
do you allow your children to approach hettie men in mixed company?

The Furred Reich: The truth about Nazi furries and the alt-right
People who dress up as animals are adopting Nazi-style iconography and calling themselves “alt-furry”. What’s behind it?

“It’s just a piece of cloth, that’s really what it is.”

Foxler Nightfire is calling me from his home in Fort Collins, Colorado. Over the last few days, the 29-year-old has faced a torrent of online abuse after posting a picture of himself dressed as a fox on the social network Twitter.

Though furries – people who dress up as animals, occasionally for sexual purposes – often face criticism, it is something other than Foxler’s fur-suit (known as a “fursona” – fur persona) that has drawn the internet’s ire. The problem? On his left arm he is wearing a red armband, emblazoned with a white circle, in which sits a black symbol.

Foxler and his armand, via Foxler Nightfire

XVX ️ℹ️Ⓜ️️ @powerxslave
Nazi furries exist and I never been more ready to knock someone the fuck out https://twitter.com/starfoxacefox/status/825041509703643136 …

Foxler Nightfire @starfoxACEFOX
Always be yourself and never let anyone change you, forever and always furry. Thanks to everyone and the #AltFurry for the support

Edit: Yes, I am too lazy (tired, actually) to look at their twitters and work it out for myself.

All very silly, in either case. And almost certainly a form of satire designed to wind up some group of people or other.

kamalktk is a furry, i see fur

what a bunch of cunts

Well that was even weirder than I thought it was going to be.

I once had a rummage round the internet after coming across someone who was a furry on a blog. I found a furry forum which seemed to be about 50% moaning about how people thought it was all about sex and it wasn' t and 50% moaning about stuff like the (then) recent outlawing of bestiality in Germany. There isn't a disgusted enough looking smiley.

Shady said:
kamalktk is a furry, i see fur
Click to expand...
As an abominable snowman I do not need to wear a fur suit, thus I am not a furry, I am furry. A distinction, which you, as a cat, can appreciate.

These f*ckers need to be shamed and taken out of their silly costumes. Their fathers and grandfather's went through hell killing a Nazi war machine that went suicidal near the end of ww2 The Nazi's executed POW's. Sent children to fight their battles and I'm not touching on the holocaust - anyone who supports this type of shit is a fucking idiot.

kamalktk said:
As an abominable snowman I do not need to wear a fur suit, thus I am not a furry, I am furry. A distinction, which you, as a cat, can appreciate.
Click to expand...
I concede that, and you are the cutest abominable snowman ever, i thought the avvie was from some cute kiddies programme, sorry

kamalktk said:
As an abominable snowman I do not need to wear a fur suit
Click to expand...
I am so sorry, I hadn't realised that was a portrait! You are magnificent!