I am very interested in giant crabs; I remember seeing a Keith Floyd cookery programme one time and they showed a Queensland mud crab that measured about 4 foot across the width of it's shell!!

Does anybody have any other stories or info regarding giant crabs? I mean really big buggers, 5 foot or more...

kevin_latch said:
...they showed a Queensland mud crab that measured about 4 foot across the width of it's shell...
Click to expand...

Were they feeding it on steroids? This Fisheries Research site from Australia lists them as about 6 inches across...
The Japanese spider crab is listed as the biggest (known, living) crab, with a 15 inch shell and legs that can reach up to 13 feet across...
K

No, I'm pretty sure this crab was really massive; Keith Floyd had to haul the thing up with both hands and said that it's claws would easily take a finger off!

'Course, I could of been dreaming all along....
A

This is the biggest I could find. That's chefs Phil Vickery and Nick Nairn in the foreground.

"I saw a mudcrab the other day .... disgusting creatures, I hope never to see another"*

The Tasmanian Giant crab has a shell / carapace up to approximately 18 inches across, with pincers / legs each going a further 18 inches or so. That could well be the beastie Floyd had a grip on...

There's a nice pic here that show the size...
K

Wow, that's a big bugger; you wouldn't want to come across that whilst dipping your toes in a rock pool!!

It's funny that although I am interested in crabs I am absolutley terrified of them! I'm a surfer and spend mst of my free time in the sea, but if I see even a two-inch crab I scream like a girl and run.

I must have been nipped by one as a kidbut can't remember it (must have erased it from my memory!!);

I wonder how many other people have a crab-phobia
L

Kabourophobia, apparently. So enought that there's a name for it. :?
K

Thankyou for that my friend; I now have a name for my pain!!!

Has anyone else ever thought how hideously disgustingly scary these lovely creatures must look to eat for someone who has never seen one?

I mean I've seen people feeling sick when watching Amazonian indians eating a tarantula or Africans eating fat maggots from the ground. TBH both look more appetising to me than a crab or a prawn or lobster, which look themselves like strange spider-like pink things.
Now I'm used to them and love both the animals alive and cooked ["Pinchy would have wanted me to do this..."] but who are we to get stuck up when people around the world have other delicatessen that look just as good to them as crabs do to us?

kevin_latch said:
I am very interested in giant crabs; I remember seeing a Keith Floyd cookery programme one time and they showed a Queensland mud crab that measured about 4 foot across the width of it's shell!!
Click to expand...

Are you sure you're not getting Keith Floyd mixed up with Guy N. Smith?
K

Yes, I have read 'Killer Crabs' by Guy N Smith

Story was rubbish, but the sex scenes 'comforted' me on many a teenage night; (ahem...)

There are tales of those Iapanese crabs killing people but I dont know if any have been confirmed.

And your right, Dingo, seafood eating is pretty gross. I have friends who are seafood fanatics and the yuck they eat has to be seen to be believed. Limpets are a famine food historicaly, but I know people who are delighted should they come across a big fat one. (and they are a lot safer to eat than filter feeding shellfish.) every neap tide another friend is at the extreeme low water, digging out razor clams, and I wont mention Elvers...
K

Totally freaked me out as a child when I read 'Killer Crabs', especially the bit when the captain of the Japanese trawller is pinned down by a six foot long crab, and the guy is disembowled alive; ARGGGHHH!!!!!!

Outside the coast of Norway we got something called the King Crab. Originally it only lived in the arctic oceans north of Russia and Alaska/Canada but has expanded its territory down to the Norwegian coast.

Probably a hoax or photoshop, but quite and interesting one nonetheless.

I didn't know there was a giant crab thread.

I guess if that one doesn't belong here then nothing does.

ChrisBoardman said:
I didn't know there was a giant crab thread.

I guess if that one doesn't belong here then nothing does.
Click to expand...

It has been silent for almost 8 years, you have roused its depths.

I've put this elsewhere on the boards, but here she is again: A photo from the Illustrated London News, 14 October 1961:

amarok2005 said:
I've put this elsewhere on the boards, but here she is again: A photo from the Illustrated London News, 14 October 1961:

That is huge! :shock:

Found by serendipity as usual; I was actually looking for zoologist Maurice Burton's article on the "Soay Beast," the huge turtle-like creature reported off the coast of Scotland. I'll take my monsters where I finds 'em!

A horde of giant spider crabs has amassed in waters near the Australian city of Melbourne.

Hundreds of thousands of the crabs migrate to Australia's southern shores each year as ocean waters cool.

Ms Marris said she hoped to raise awareness of the diversity of sea life in Australia's southern waters.

"Who would have thought something like this, that is so spectacular, could be happening in Australia on the southern shore," she said.

The exact reason for the behaviour is not known, but scientists speculate it is most likely to do with the process of moulting. ...

OMG! This terrifies me! Don't sleep on the beach! 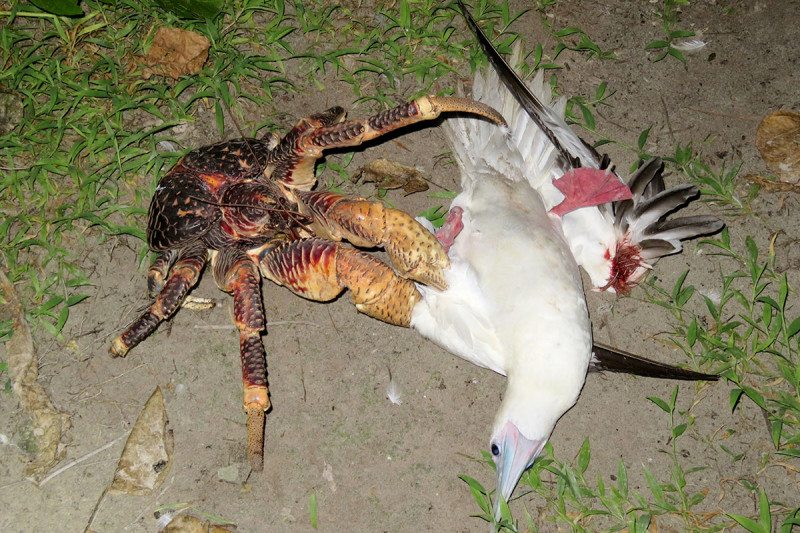 A giant coconut crab has been filmed stalking, killing and devouring a seabird. It is the first time these whopping crustaceans have been seen actively hunting large, back-boned animals, and suggests they might dominate their island ecosystems.

Coconut crabs (Birgus latro), also known as robber crabs, are an imposing sight. They can weigh up to 4 kilograms, as much as a house cat, and sport legs that span almost a metre. This makes them the largest invertebrates – animals without backbones – on land. The crabs live on coral atolls in the tropical Indian and Pacific oceans.

They are renowned for their tree-climbing abilities and taste for coconuts, which they crack open with their powerful claws. They do sometimes eat meat, but until now it was thought that they only obtained it by opportunistic scavenging.

Between January and March 2016, Mark Laidre of Dartmouth College in New Hampshire visited the Chagos Archipelago, a remote series of atolls in the Indian Ocean. Chagos is ideal for studying coconut crabs: it is in pristine condition, is surrounded by one of the largest marine reserves on Earth and has lots of coconut crabs, making them easier to find and observe. ...

ramonmercado said:
Giant coconut crab sneaks up on a sleeping bird and kills it

I can remember reading two books about US Marines in the Pacific Theatre - Helmet for my Pillow and With the Old Breed - and I recall that one or both of them mentioned the author's horror for these primeval monster land crabs. I thought at the time, "What a girly! They're only crabs..." Now I see what he meant.

I can remember reading two books about US Marines in the Pacific Theatre - Helmet for my Pillow and With the Old Breed - and I recall that one or both of them mentioned the author's horror for these primeval monster land crabs. I thought at the time, "What a girly! They're only crabs..." Now I see what he meant.

And when you think of some of the other things that Sledge and Leckie must have witnessed - Sledge's aside about about his fellow marine throwing pebbles sticks with me to this day - these buggers must have made quite the impression.

Krepostnoi said:
...Sledge's aside about about his fellow marine throwing pebbles sticks with me to this day...
Click to expand...

That scene made it into the TV series The Pacific.