This is a great UFO pic taken a while back in Scotland..
https://www.huffpost.com/entry/ufos-scotland-john-macdonald_n_56df560fe4b0b25c917ffd55

feinman said:
This is a great UFO pic taken a while back in Scotland..
https://www.huffpost.com/entry/ufos-scotland-john-macdonald_n_56df560fe4b0b25c917ffd55

To me, suspiciously reminiscent of: 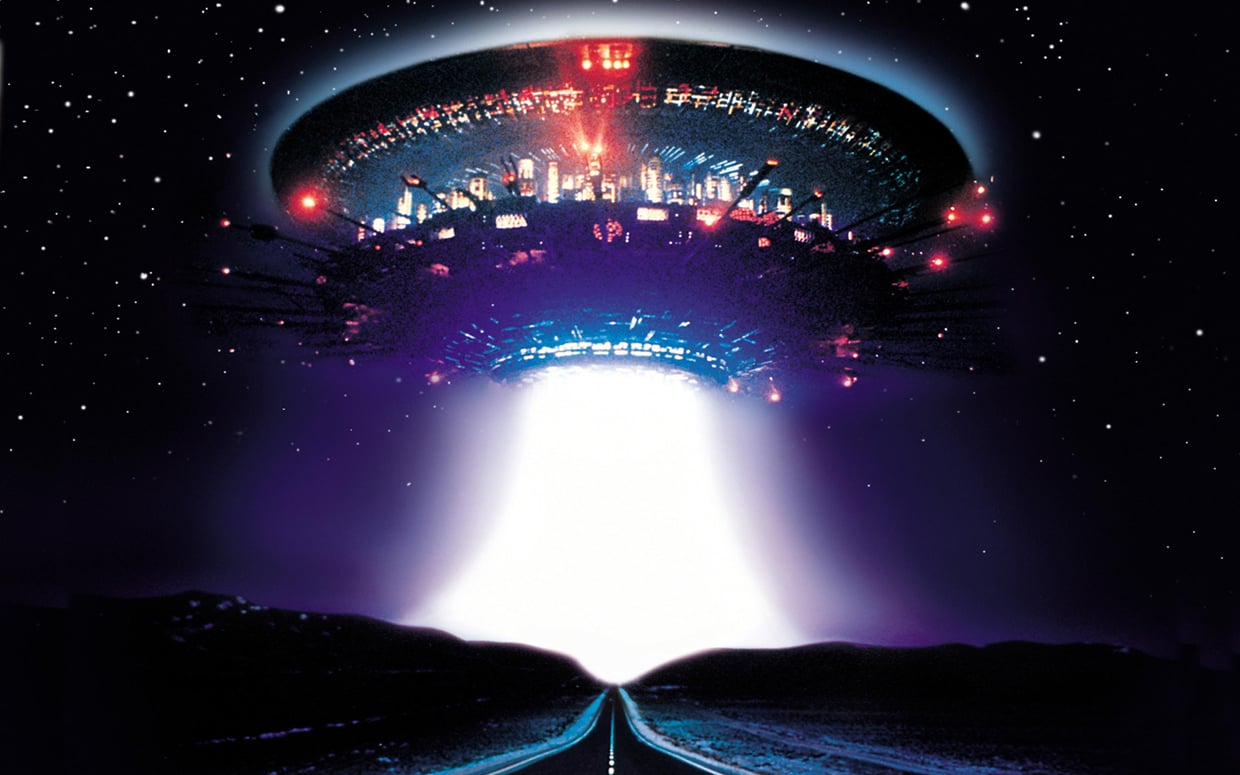 maximus otter said:
To me, suspiciously reminiscent of:

I see what you mean! The perimeter lights remind me of the Lubbock Lights and I think, likely have the same purpose, concerned with propulsion.
https://www.google.com/search?q=lub...S8KXlAhX3FjQIHT0uB8cQ_AUIGSgC&biw=962&bih=601
Notice that the lights are around the perimeter of an irregular ellipse, worm's-eye view; it is an irregular circle; flexible, not rigid. The beginning of that movie with the police chase, was based on:

...what flew over these military installations may never be explained . . .
CONTINUED
Then, starting Nov. 7 for four straight nights, Malmstrom AFB and a series of ICBM launch control facilities in Montana, along with Minot AFB in North Dakota, began reporting flyovers of brightly lit objects this time referred to in the 24th NORAD region commander's log as "UFO's." The mysterious activity was so intense that on the second night, Malmstrom sent up two F-106 interceptors after its radar picked up seven separate aircraft between 9500 feet and 15,500 feet. They were flying at only 7 knots, later sped up to 150 knots, and then virtually hovered at 3 knots. A memorandum from the National Military Command Center at the Pentagon describes what happened after the seven objects were picked up on radar: "Ground witnesses observed lights in the sky and the sounds of engines similar to jet fighters. Cross-tell with FAA Federal Aviation Administration revealed no jet aircraft within 100 NM nautical miles of the sightings. Radar tracked the objects over Lewistown, Mont., at a speed of 7 knots " The jets took off but were unable to make contact because the objects began a cat-and-mouse game with the F-106's. "Personnel at 4 SAC sites reported observing intercepting F-106's arrive in area; sighted objects turned off their lights upon arrival of interceptors, and back on upon their departure." The Pentagon memo makes it clear that radar operators checked out their equipment, and it was functioning properly. Also ruled out were atmospheric tricks caused by the northern lights. Other entries from the 24th NORAD region commander's log detail the strangehappenings throughout this period: "7 Nov. Received a call from the 341st SAC CP saying that the following missile locations reported seeing a large red to orange to yellow object. . . ." "7 Nov. SAC advised that the LCF at Harlowton, Mont., observed an object which emitted a light which illuminated the site driveway." "7 Nov. L-1 reports that the object to their northeast seems to be issuing a black object from it, tubular in shape." "8 Nov. A security camper team at K-4 reported UFO's with white lights, one red light 50 yards behind white light. Personnel at K-1 seeing same object" "8 Nov. L-5 reported object in
creased in speed high velocity, raised in altitude and now cannot tell the object from the stars." "9 Nov. SAC CP reports UFO 20 miles southeast of Lewistown Mont., orange white disc object." "10 Nov. UFO sighting reported by Minot Air Force station, a bright starlike object in the west, moving east, about the size of a car. The object, passed over the radar station, 1000 feet to 2000 feet high, no noise heard." The following night, Canadian Air Force personnel at NORAD's Falconbridge radar station near Sudbury, On- . ta-io along with many civilians and local policemen saw a similar brightly lit object. F-106's from Selfridge AFB in Michigan failed to make contact A confidential report issued by the Combat Operations Center, NORAD, describes the incident: "Falconbridge reported search and height finder radar paints on an object
25 to 30 NM south of the sight ranging in altitude from 26,000 feet to 72,000 feet. The site commander and other personnel say the object appeared as a bright starbut much closer. "With binoculars, the object appeared as a 100-ft diameter sphere and appeared to have craters around the outside. Be assured that this command is doing everything possible to identify and provide solid factual information on these sitings sic. "I have also expressed my concern to SAFOI Air Force information that we come up soonest with a proposed answer to queries from the press to prevent overreaction by the public to reports by the media that may be blown out of proportion. To date efforts by Air Guard helicopters, SAC helicopters and NORAD F-106's have failed to produce positive ID." News reports on the strange activi
ties were confined to sketchy stories in such local newspapers as the Bangor (Maine) Daily News and the Sudbury (Ontario) Star. Reporters had no idea that UFOtype activity had occurred at any bases other than their local installation, and the Pentagon issued instructions to its information officers to keep the lid on. Despite three weeks of intense and similar activity across the northern tier states, a Pentagon telex ordered information officers: "Unless there is evidence which links sightings or unless media queries link sightings, queries can best be handled individually . . . responses should be direct, forthright and emphasize that the action taken was in response to an isolated or specific incident." During these three weeks, the Air Force constantly checked with other military installations, the Federal Aviation Administration, local airports, law enforcement agencies, the FBI, the Royal Canadian Mounted Police and others to determine if any of the craft might belong to these agencies. The results were negative. What flew over the military installations during those 24 nights between Oct. 27 and Nov. 19 will probably never be fully explained, and the last entries in the 24th NORAD region commander's log serve only to offer more tantalizing hints: "12 Nov. UFO reported from KOI. They say the object is over Big Snowy mountain with a red light on it at high altitude." "12 Nov. Second UFO in same area reported. Appeared to be sending a beam of light to the ground intermittently." "19 Nov. SAC command post observed object traveling NE at a fast rate of speed. Object bright white light seen 45 to 50 sec following terrain 200 ft off ground. The light was two to three times brighter than .landing lights on a jet " For UFO Watchers Several UFO study groups welcome inquiries and reports of sightings from the public. Among the principal groups are: Center for UFO Studies, 1609 Sherman Ave., Suite 207, Evanston, HI. 60201. National Investigations Committee on Aerial Phenomena, 1 Bank St., Suite 307, Gaithersburg, Md. 20760. Aerial Phenomena Research Organization, 3910 E. Kleindale Rd.. Tucson, Ariz. 85712. Citizens Against UFO Secrecy, 191 E. 161st St., Bronx, N.Y. 10451.
UFO'S
10 PARADE DECEMBER 10, 1978

Their proof reading isn't too bright either.

Here is a good, typical kind sighting; show yourself then shoot off like a bullet:
https://www.nzherald.co.nz/nz/news/article.cfm?c_id=1&objectid=12281687

Wouldn't that be right at the beginning of the great ufo flap of the fifties ?

INT21 said:
Wouldn't that be right at the beginning of the great ufo flap of the fifties ?
Click to expand...

You bet! Right in the middle of the wave that really started right after WWII and peaked in the '50s. It's amazing how many objects were seen in Australia and still are. TROVE database is full of them; they seem to have been coming out of the ocean, as they often do.

The "Strange Star" in the article from '25 above, reminds me of the Austrian UFO, that also initially looked like a star:
"He thought it was a falling star. But it remained motionless over the road."
From '25:
"This star appears to fall some distance in the heavens and there remains stationary for a time."


feinman said:
1960.
https://cdnc.ucr.edu/?a=d&d=SCS19600424.1.24&srpos=464&e=-------en--20--461--txt-txIN--------1
View attachment 17050
"AUSTRIAN UFO Unidentified Flying Object was photographed by a news cameraman In Leibnitz, Austria, in March. C. W. Fitch, UFO Investigator in Cleveland, Ohio, received this photo direct from "Montag," Vienna newspaper which printed it. The photographer said he saw a shining light far ahead as he rode a motorcycle through the countryside at 1 a. m. He thought it was a falling star. But it remained motionless over the road. He felt heat from it as he snapped the picture from a distance of 50 feet. After six to seven seconds it flew off. "
Click to expand...

Now thats a good one.

No vibe of 19th C tall story there.

I enjoy the objects that were seen on the 1933 Everest expedition, an amazing event like the sighting of the Sternenschiff. The climber put himself through a series of mental tests. It's the old "reveal and take off" tactics the objects have used throughout history.
https://trove.nla.gov.au/newspaper/article/159645557?searchTerm=strange AND
Last edited: Dec 4, 2019

That's it, then! No more UFO or UAP, henceforth it's always going to be QHV (Queer Heavenly Visitor).

Excitement became so acute in the neighborhood that men thought of shooting at the strange visitor with rifles.

A long-standing tradition with American men, no doubt: If it looks strange, SHOOT IT!
Last edited: Dec 15, 2019

Indrid Drood said:
Excitement became so acute in the neighborhood that men thought of shooting at the strange visitor with rifles.

A long-standing tradition with American men, no doubt: If it looks strange, SHOOT IT!
Click to expand...

Very American indeed, sadly.. When we run out of UFOs to shoot at, we HAVE to shoot at something! Just see the daily shootings everywhere in America! Pathetic. But when you and your cat can go buy an assault rifle with no background checks in half an hour, that's what apparently happens. I was horrified at the number of times people were shooting at UFOs in the past, a really bad idea..

feinman said:
Each time the "thing" seemed to move in on us, as though exploring the various automobile lights and flashlights trained on the repair job, the two little girls would cover their ears and throw themselves at their mother's feet, sobbing, while I tried to assure both the mother and the girls that there was bound to be a logical explanation
Click to expand...

Ummm... Good luck with that!

Maybe it's just Imagination itself... imagining!