Is it that they don;t show you the ones where the person stood their ground and punched them?

This is a lot more serious as a hoax:
http://www.avclub.com/article/leagues-steve-rannazzisi-says-he-lied-about-almost-225427

I've never heard of this guy, are the US posters familiar with him? What is it with people who pretend to have survived tragedies and the WTC attacks in particular? Is it for the kudos? Misplaced jealousy translated into attention seeking? Weird.

^^I'm not in the US and have never heard of him, but his case is similar to that of Tania Head. I note they both claimed to have worked for Merrill Lynch:

A documentary entitled The Woman Who Wasn't There has been made about Tania Head's story:

GNC said:
This is a lot more serious as a hoax:
http://www.avclub.com/article/leagues-steve-rannazzisi-says-he-lied-about-almost-225427

I've never heard of this guy, are the US posters familiar with him? What is it with people who pretend to have survived tragedies and the WTC attacks in particular? Is it for the kudos? Misplaced jealousy translated into attention seeking? Weird.
Click to expand...

Straying off topic for a second, I used to play with the girl next door called Rebecca Gray when we were tiny. I hadn't thought about her in years until my Mum told me Becky was supposed to be at work in the World Trade Centre when it was hit ..... her son was poorly so she phoned it in that she wouldn't be going in to work that day ... haunting good luck.

You should believe almost nothing whatsover regarding the the WTC attacks, other than the indisputable fact that there were originally two towers standing, then none.

Ermintrude said:
You should believe almost nothing whatsover regarding the the WTC attacks, other than the indisputable fact that there were originally two towers standing, then none.
Click to expand...

Very true although my Mum and Jenny (Becky's Mum) are still good friends, we already knew Becky was working in the WTC so I tend to believe this one

I laughed more at that every one of the 20 times I played it! :rofl:

A vintage hoax case, dusted off by BoingBoing.

In early 1958 Michigan motorists began to report sightings of a "little blue man". The glowing figure, who looked like a spaceman from a science-fiction movie, would appear out of nowhere on rural roads, and then just as suddenly disappear. When startled motorists stopped to investigate, they could find no trace of him.

As time progressed, the sightings grew more fantastic. Some said the man appeared to be ten-feet high. Others thought he was only two-feet high. One motorist claimed he "ran faster than any human."

The police began to search for what, or who, was causing these sightings. Their search ended when three young men — Jerry Sprague, Don Weiss, and LeRoy Schultz — came forward and confessed. The young men explained how all the reports of flying saucers in the news had given them an idea for a prank. They created a costume consisting of long underwear, gloves, combat boots, a sheet with holes cut out for the eyes, and a football helmet to which they attached blinking lights. They then spray-painted the costume glow-in-the-dark blue (inspired by a song popular on the radio at the time, "Little Blue Man" by Betty Johnson). Sprague wore the costume, noting that "it was my underwear and I was the only one it would fit." 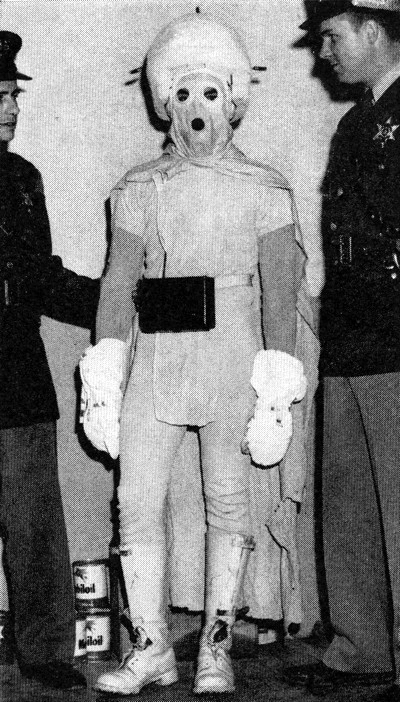 The trio staked out rural roads at night. Sprague would hide in a ditch, and when a motorist approached, he would leap out and run along the road to attract their attention before making a quick getaway by jumping into the trunk of the car driven by Weiss and Schultz. They did this on at least eight or ten nights, over a period of weeks.

The police let the pranksters off with a warning not to do it again.

My Lidl Pony
Shoppers couldn't believe their eyes when they spotted a pony being led down the aisles of Lidl in Ashford.

Browsing the New Street store yesterday, the owner appeared to be blind and the pony was wearing a fluorescent jacket, usually donned by guide dogs.

The pair wandered along the aisles around 3pm yesterday before being thrown out by security staff.

But one shopper, who wished to remain anonymous, said the incident looked to be little more than a prank as the man leading the animal loudly announced "oh no, I've done it again, this isn't the vets".

He said: "We couldn't believe it. He walked right in with this pony, right down to the bakery department and you could just hear 'clip-clip'.

"Everyone was just staring at him, I still don't know what it was about but the security guards led him out the building quite quickly and then I don't know what happened next.

"When they came over he said in a thick Irish accent 'oh is my dog not allowed in here then?'."

Someone is trolling Kellogg’s with brutal fake Frosted Flakes ads

Last week, someone uploaded a YouTube commercial purporting to be a the first in a series of ten new Frosted Flakes ads to the account Tony Is Back! As their story goes, Tony The Tiger is trying to help the now-grown up kids who starred in his commercials 30 years ago. In the first video, Tony shows up to help an aging sex worker named Candy. It’s dark as hell.
Click to expand...

The mystery of who anchored two life-size inflatable dolls outside Falmouth's Maritime Museum remains unsolved three years on.
When staff at the museum arrived for work on October 29, 2012, they found two unexpected visitors peering through the windows.
Clearly not shy, the unclothed couple were discovered in the museum's tidal zone, which looks out into Falmouth Harbour.

Three years later and no one has come forward to claim responsibility for the prank.
Michael Sweeney, communications manager at the popular attraction, said: "Nobody has a clue how they got there.
"We have no idea who did it or why but we would love to know."

This is the first I've heard of this!

Five pranksters who dressed up as traffic cones have been investigated for "blocking the road like traffic cones", police have said.
Kingston Police in south-west London tweeted a picture of a call-out their officers attended on Halloween.
Five giant orange-clad people were reportedly disrupting traffic in Kingston town centre at about 04:00 GMT on Sunday. 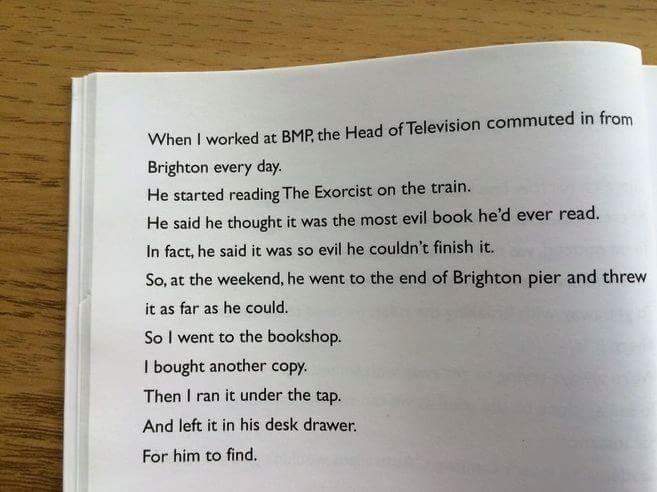 Fixed it for you.

Of course, if he'd thought to analyse the dampness, he'd have realized it wasn't salt water....

Anyway, we already have threads on pranks....

I've got a mate called Kev who comes into my shop sometimes. Last week he came in & could tell I was stressing about something and suggested I should leave 'love bombs' around the place .. that is, little words of encouragement printed on the price tickets instead of them just being price tickets .. so 'Fun Facts About Kev #1' detailed the fact that he's got a cat called Prince George named from the Hugh Laurie character from Blackadder the Third ... 'Fun Facts About Kev #2' went up tonight ... It would take 34,000,836 Kevs laid end to end to reach the moon if he is 5ft 6" tall .... I'm off to Wikipedia tonight to find different country and folk lore connections with the name Kev (Kevin).

For our latest mission, we staged an elaborate time travel prank on a New York City subway car with four sets of identical twins. A man enters a subway car and announces he is raising money to complete his time machine. At the next stop, his future self enters to try to talk him out of it. More and more time travelers convene on the subway car as the train rolls along, surprising the random commuters caught up in the middle.
Click to expand...

Highly enjoyable article about one of America's greatest hoaxsters. He started decades before Youtube!
The Hoaxster Who Revealed Sad Truths About America
On May 27, 1959, a mysterious, bespectacled man in a suit appeared on The Today Show. After briskly introducing himself, he turned to the camera and told America of his mission: to “clothe naked animals for the sake of decency.”

The man went by the name of G. Clifford Prout, and he claimed to be the president of an organization called The Society for Indecency to Naked Animals (S.I.N.A.). Naked animals, he harped, were “destroying the moral integrity of our great nation” — and the only solution was to cover them up with pants and dresses.

Prout’s impassioned speech did not fall on deaf ears: within days, S.I.N.A. attracted more than 50,000 members. For the next four years, the organization and its leader topped news headlines, made the rounds on talk shows, and spurred heated debates among pundits.

But S.I.N.A. was not real: it was the invention of Alan Abel, history’s greatest media hoaxster......
http://priceonomics.com/the-hoaxster-who-revealed-sad-truths-about-america/
(much much more silliness then ensued)

Alan Abel is still alive, too. A brilliant man, he puts most other fly by night hoaxers to shame. His film from the 1970s Is There Sex After Death? is worth a look.

Shoe on the head prank ... safe for work