maximus otter said:
l want to be a standup comic wherever they are. lt doesn’t take much to get them convulsing with laughter.

From the accents, it could be the Netherlands (but I'm just guessing). At first, I thought it was Turkey.

Étienne Klein’s tweet was liked and retweeted thousands of times before he revealed he was trolling and the photo showed a slice of sausage, not Proxima Centauri.

Images from the $10 billion James Webb Space Telescope, a collaboration between NASA and Canada and Europe’s space agencies, went viral throughout July as its first images were released to the public. But a few days later, Klein revealed that the photo he tweeted was not the work of the world’s most powerful space telescope, as he had in fact tweeted a slice of chorizo sausage.

Klein told French news outlet Le Point that his intention had been to educate people about fake news online, adding that “I also think that if I hadn't said it was a James Webb photo, it wouldn't have been so successful.”
Click to expand...

This offer of a free haunted refrigerator in the London area is believed to be a hoax. Here's the poster that was circulated to advertise it:

A “free fridge” offer comes with a catch: The kitchen appliance is likely haunted, the owner warns.

“My stepmother had a heart attack on our kitchen floor in the middle of an electrical storm, and her soul was transferred into the computer unit of our smart fridge,” says the poster, which was distributed around London.

And apparently the stepmother “talks” to them.

“She has been subtly undermining me ever since, commenting on how many slices of cheese I’ve eaten, or whether I’ve properly put the lid back on something,” they claim.

The owner held out for a while and then decided they had had enough, according to South West News Service.

“I’m starting to feel it is completely unreasonable that she’s decided to live in our fridge, judging me on my culinary decisions,” according to the poster. “She has to go.” ...
Click to expand...

Why do people keep falling for hoaxes?

Moreover, what is it about certain hoaxes that maintain an iron hold on public imagination, long after their con is exposed? The Roger Dodsworth hoax of 1826 managed to fool so many people and remain in so many memories that a short story about it, published nearly forty years later, still seemed relevant to readers, writes English literature scholar Charles E. Robinson.

Great Britain suffered through an usually hot summer in 1826, and the popular press took full advantage of it, banking on the unusual and “chilling” tale of the so-called Roger Dodsworth to sell copies. According to newspapers in Lyons, Rouen, and Paris, Dodsworth was the thirty-year-old son of the sixteenth-century English antiquarian Roger Dodsworth. As the story went, Dodsworth the younger had been frozen in ice for 166 years, having been trapped under a avalanche while on expedition at Mount St. Gothard in the Alps in 1660. The story was picked up in London; the most popular publications of the day sensationalized an already sensational tale. Even the conservative weekly John Bull published letters supposedly penned by the remarkable survivor. The public, fully under sway of the imagination and emotion that shaped the age of Romanticism, was enthralled and seduced by the story as it passed from page to page in the London papers.

The popularity of the tall, cold tale had risen and fallen in the span of a year.

Eventually, readers generally accepted that the Dodsworth revivification was false—common sense apparently triumphed in people’s overactive minds—and the story ceased circulating in early November 1826; the popularity of the tall, cold tale had risen and fallen in the span of a year. The fate of the actual (possibly French) claimant remains unknown; it seems that after their fifteen minutes of fame, they simply vanished in obscurity.

EnolaGaia said:
This offer of a free haunted refrigerator in the London area is believed to be a hoax. Here's the poster that was circulated to advertise it:

Cheaper than paying the council to shift it.

This image of Mark Zuckerberg saying 9/11 “never happened” in the metaverse is altered.

In the original Facebook post, the Meta CEO promoted the company’s virtual reality platform but did not mention the terrorist attacks 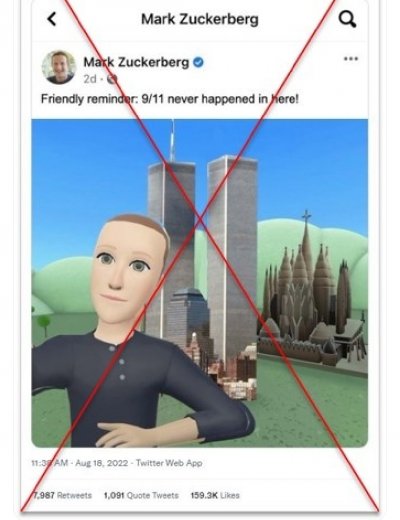 I love this prank

A Texas couple pulled a prank to get back at serial porch pirates in their neighborhood. The porch pirates retaliated with a prank of their own ...

Several people in a south Austin neighborhood said their doorbell cameras have caught the same people swiping packages from their porches. ...

She was already frustrated when it happened to her, but when she saw other people post videos of what looked like the same suspects and vehicle, she stepped in, hoping to thwart the operation.

She and her husband put a box of dirty diapers on the front porch.

“The same [people] came back and took [the] package,” she said. “And when they discovered it was a bunch of dirty diapers they came back and smeared those diapers on our front door.” ...

It didn’t stop there.

“Thirty minutes later, they came back with a giant bag of cow manure. They spread that all over our front porch and on our cars in the driveway,” Gabriela said. “That was the straw that broke the camel’s back. I called police, filed a report, and now there’s a detective on the case.”

Gabriele said the people seen stealing the packages are driving around in a black Chevy Suburban with no plates.
The Austin Police Department said it’s an active case, and the manure-smearing portion could hit the point of criminal mischief. ...
Click to expand...

EnolaGaia said:
A Texas couple pulled a prank to get back at serial porch pirates in their neighborhood. The porch pirates retaliated with a prank of their own ...
...

The Austin Police Department said it’s an active case, and the manure-smearing portion could hit the point of criminal mischief. ...
Click to expand...

Now that the perps have gone beyond trivial annoyances like burglary and operating an unregistered motor vehicle, and escalated their crimes to mischief, I'm sure the police will get right on it.

CAUTION: May not know what he's talking about.

These perps retaliated against the homeowners because they were dissatisfied with package they stole. The perps apparently feel they are ENTITLED to lift anything they see sitting on some one's front porch.

EnolaGaia said:
This offer of a free haunted refrigerator in the London area is believed to be a hoax. Here's the poster that was circulated to advertise it:

Is it just me, or is there some doubt about the ID of the person haunting this fridge? The poster says "stepmother", but also that it's the author's wife's mother, which would make her the mother-in-law.

I mean, if I am going to accept a free haunted fridge, then I want to know who's the haunter!

End of an era

A man who spent £25,000 on a fake airport sign in mid Wales is bringing the prank to an end after 20 years.
For the past two decades, a billboard for Llandegley International has been a landmark in the Powys village.
It looks like an ordinary road sign, but actually signposts to an airport that only exists in people's imagination.
After spending thousands of pounds to erect and maintain the sign, the owner decided it's time to take it down.
Since 2002, if you travel eastwards along the A44 between Rhayader and Kington, you will see a sign directing drivers to Terminals 1 and 2 of Llandegley International airport.
Click to expand...

Writers kill off characters but less often themselves.

No one saw this plot twist coming.

In September 2020, a Facebook post from someone claiming to be the daughter of indie romance author Susan Meachen announced the writer had died by suicide. Ms Meachen wrote what she described as "perfectly flawed" romance novels and had fostered a tightknit online community of readers and fellow authors who supported each other's work.

As word of her death spread, author Susan A Cole recalled being shocked.

"When it came out that one of our own had taken her life, that was destructive enough, we were grieving for that alone," Ms Cole told the BBC.
Then rumors began to spread online that Ms Meachen had been bullied.

"All the finger pointing started and it drove a huge wedge in the community that lasted for months," Ms Cole said.

The group marked the anniversary of Susan Meachen's death for two years. Fundraisers and book auctions were held in her honour and authors like Candace Adams contributed to an anthology of short stories that was dedicated to keeping "bullying where it belongs - in fiction".

But that all ended this week, when suddenly Ms Meachen was resurrected.

She announced her return on social media - much to the shock and confusion of fans and friends - and admitted her suicide had been staged.

"There's going to be tons of questions," the post said, according to screengrabs shared online. "Let the fun begin."