The originally posted link is dead. I cannot locate the linked material at the current New Scientist site.

Here's the full content of the linked article, salvaged from the Wayback Machine.

Paintings of mythical animal-human hybrids are among the oldest surviving art ever produced. New research suggests that minotaurs, satyrs, the werewolves beloved of Hollywood and even Egypt's animal-headed gods are latecomers to the art scene compared with the "therianthropes" carved by the earliest artists on bone and painted on stone. "They go back to the dawn of humanity, to the first fully modern people," claims rock art expert Paul Ta�on of the Australian Museum in Sydney.

He has found that in Australia and South Africa there are dozens of animal-headed people in rock paintings and carvings more than 10,000 years old. Some may be far older. The oldest was an androgynous feline-headed statuette from Germany, thought to be around 32,000 years old.

Together with Christopher Chippindale at Cambridge University's Museum of Archaeology and Anthropology, Ta�on conducted the first rigorous worldwide survey of prehistoric therianthrope images. They surveyed nearly 5000 examples of rock art, most from northern Australia, Europe and South Africa.

They recorded the frequency and types of therianthropes portrayed, and reviewed their age. Because many images have not been radiocarbon dated, the team also assessed artistic style and content - say, portrayals of extinct animals - and looked at whether motifs were superimposed on top of each other.

Ta�on and Chippindale say that belief in therianthropes was common in the distant past. Although they comprised only about one per cent of the works studied, the researchers found examples worldwide, indicating that today's fascination with hybrids such as werewolves is nothing new. Early humans were just as fascinated by supernatural "composite" beings who exist between the everyday and spirit worlds.

Sven Ouzman of the National Museum of South Africa in Bloemfontein says it is notoriously difficult to date rock art, so he is sceptical of the claim that therianthropes were the first beings ever portrayed. "[But] what Paul and Chris's paper does do is set up a testable hypothesis," he says.
Click to expand...

Arnold Böcklin, famous for his Island Of The Dead paintings, did quite a unique line in 'realistic' centaurs. 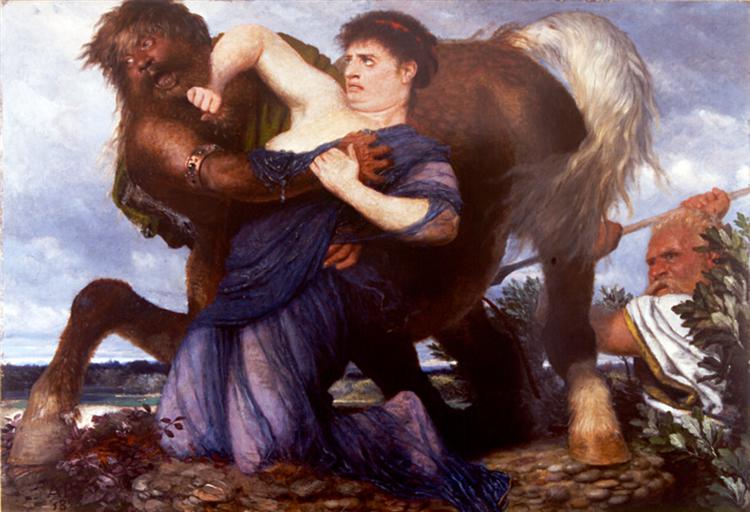 He wanted to catch a bus to the city centaur.

I refer again here to the horse pictured on p75 of FT364.

Could this type of view of a horse be the source of human-faced horse myths?

In fact, the more horses noses I look at, the more convinced I am that they are the truth behind any number of sightings down the years.

Little green men, roadside phantoms... A horse with its nose stuck over a fence, illuminated by a torch or car headlights, seen quickly by someone and the rest filled in by paredolia...
L