How's The Weather Outside Today?

Now even the U.S. weather service is expressing concern over the split Polar Vortex.

“Something wicked this way comes” (1962 novel by Ray Bradbury )

looking for cracks in the pavement.

We had snow several days ago which just hasn't fully gone away. Looked beautiful at first, every branch of every tree and shrub covered in sparkly white. Lovely. Nice and crunchy to walk on and everything.

Now it keeps melting a bit, then freezing, then a bit of snow again, then freezing... it's like an ice rink out there. And of course I am absolutely hopeless at walking on anything icy/slippery. I tense up and panic, and my legs tire out from the constant attempts to stay upright and all the minute movements of ankles, knees and hips that it entails.

I think it's supposed to be cold for a few more days yet. I wonder if we'll get more of the same with this Polar Vortex.

Snow, the light and fluffy variety that eddies in the slighest breeze and forms layers that deaden sound.

I let the dog out for a wee this morning. The sun was starting to shine on the top of the fence at the back of the garden, releasing mist.

As I can't got anywhere with my camera I decided to photograph it:

looking for cracks in the pavement.

They promised us a snow warning up here today.

Waited all day (dull, cloudy) and now it's raining.

Schrodinger's Zebra said:
They promised us a snow warning up here today.

Waited all day (dull, cloudy) and now it's raining.

Overcast in Berkeley 15C/60F No rain in the area.

We had freezing rain for 24 hours and now it's snowing. I predict a lot of sirens sounding off tomorrow.

It shouldn't last too long though because it will be 3C by 8am. Which is really weird weather for Edmonton. The last time I remember it being this warm in the middle of January was in 2004. It's usually around -27C give or take a few degrees and I have only had to shovel my car out once so far this season.

We've had rain all night and it's forecast to carry on all day too.
W

just thought I would pass it on to you folks

Who me said:
Morning peeps snowing like a good un in boroughbridge here’s a handy tip don’t feed the birds in your slippers in 2 inches of snow

just thought I would pass it on to you folks
Click to expand...

This weird. EVERYONE in Yorkshire seems to have proper snow. In the town across the valley, about two miles from me, it's been snowing all night and they've got about six inches of the stuff. On the top of my hill it seems to have snowed for about an hour at 3am, and it's rained ever since. We are higher up! Even York has better snow than us!

I am, quite frankly, disgusted at the weather's attempts. Of course, tonight, when I'm out at work, feet of the stuff will come down and I'll have to walk back home in the middle of the night with my wellies full of snow and sheep following me.

Mist has lifted, chilly and damp but no chance of snow in the Midlands. Just rather grey outside!

We were forecast snow for this afternoon but none has arrived yet.

"For your perusal... A dinner date with aliens.."

A real snow job, for sure.

If one reads the latest internet articles about the polar vortex, DOOM is coming.

The latest article I read is the weather pattern is setting up that mirrors the horrible winter of 1928-1929.

So far, our winter has been normal to actually warm

How has been your winter ?

The Big Storm is a-coming. We've already had a lot of rain and the local flood-spot has filled up, as it does every winter. 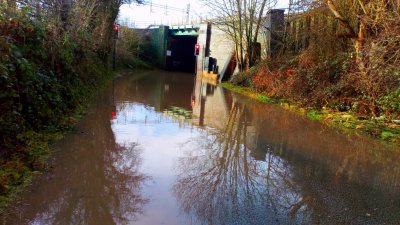 It's a railway bridge over a dip in a lane, on a steep bend, so it's always dangerous anyway.

Drivers used to have to go under it in the middle of the road before the traffic lights went up. You'd honk as you approached, grit your teeth, slow right down and hope you didn't meet anyone coming the other way.

On the photo I notice that what seem to be the traffic lights' control boxes are raised on blocks, presumably in case of expected flooding!

Once we approached it from the other side when driving home and didn't know it was a foot under water.

There was a car already stopped there, with the driver in obvious contemplation.

After about a minute he stuck his hand out of the car window and did that flat-palmed 'fffff, dodgy' hand-tipping movement.

We waved back, did a 3-point turn and took the long way home.