OneWingedBird said:
I was in Morrisons earlier and asked the staff to put out an announcement for my friend who'd got lost in the store.

I said "It's Mrs Truda, she usually goes by Anna Lynne".

Dunno what they got so mad about.
Click to expand...

OK, took me a few seconds!

With or without lube?

I've been left a stately home in my uncle's will. I've no idea yet where Sod Hall is but I'm so thrilled!

Bigphoot2 said:
I've been left a stately home in my uncle's will. I've no idea yet where Sod Hall is but I'm so thrilled!
Click to expand...

why are penguins so good on the internet? because they have webbed feet.

what do you call a happy penguin? a peng-grin

Lots of rot on both side of the climate change argument (notably more on one side of the other, but that's not the point), but this is objectively funny:

I walked in on my girlfriend having sex with her personal trainer last night.

"Honey, this is not working out."

i think at least one board member will like this.....

I used to go out with a girl called Lindsey Doyle. She smelt like a cricket bat. 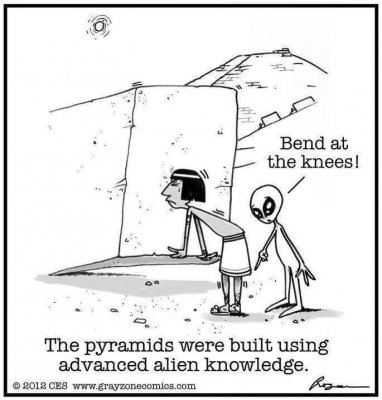 A public service announcement from the Forteana Forums Legal Counsel:

A Mafia Godfather finds out that his bookkeeper, Guido, has cheated him out of $10 million .

The bookkeeper is deaf.

And that was the reason he got the job in the first place. It was assumed that as Guido could hear nothing, he would never have any secrets to reveal.

When the Godfather goes to confront Guido about his missing millions, he takes along his personal lawyer, the only man in the organisation who knows sign language and can communicate directly with Guido.

The Godfather instructs his lawyer, "Ask this son of a bitch where my money is."

Guido nervously signs back, "I don't know what you're talking about."

The lawyer dutifully reports to the Godfather, "He says he doesn't know what you are talking about"

The Godfather pulls out a pistol, places it to Guido's temple and says slowly to his lawyer, "Ask. Him. Again"

The lawyer signs to Guido, "You know he'll kill you if you don't tell him. Now where's the money?"

Guido signs back, "OK, you don't need to shoot me. The money's in a brown briefcase buried behind the shed at my cousin Bruno's house."

The Godfather impatiently asks the lawyer, "What does he say now?"

The lawyer shrugs in resignation and replies, "He says that a pussy like you doesn't have the balls to pull the trigger."

DON'T INVITE THEM IN

In Slovakia, even advertising is metal

I met a Dalek in the pub who claimed he was from Devon so I asked him “Whereabouts in Devon are you from?”

My neighbour came round and rang my doorbell at 5 am.

Luckily I was awake, practising the drums.

Yithian said:
My neighbour came round and rang my doorbell at 5 am.

Luckily I was awake, practising the drums.
Click to expand...