While we wait for summer, here's a circle to be going on with:

Honiton A rare phenomenon normally associated with Scandinavia has been recorded on a British river.

A giant, spinning disc of ice was seen on the Otter, near Honiton, Devon, by Roy Jefferies, who was walking his dog on the bank during the recent cold snap. He was amazed by the slowly rotating, 10ft wide, perfectly circular object, which was stationary in the current close to where a stream joined the river.

Graham Blissett, who also saw the disc, said that they were very rare. He had never heard of one in Britain before. In Sweden ice discs 200 metres across have been recorded.

This strange almost perfect 'ice circle' has appeared on a frozen lake in Siberia.
While scientists have ruled out UFO involvement, they are puzzled as to how the mysterious, 2.5mile-wide geological phenomenon has formed in Lake Baikal.

It was spotted at the southern edge of the lake while another was seen near the centre. The images were taken by astronauts aboard the International Space Station circling 220 miles above Earth.

They charted the progress of the circles when they first appeared on April 5 until April 27 when the ice was beginning to split apart.

'Throughout April the circles are persistent,' a Nasa spokesman said.
'They appear when ice cover forms, and then disappear as ice melts. The pattern and appearance suggest that the ice is quite thin.'

Ice cover changes rapidly at this time of year on the Russian lake and can melt and freeze overnight. Scientists believe a spurt of warm water rose to the surface creating the distinctive pattern but are puzzled by the source of heat.

Hydrothermal activity and high heat flow has been observed in other parts of the lake but one of the circles appeared near the southern tip, over relatively deep - normally cold - water.

Lake Baikal is in a rift valley and is the largest (by volume) and deepest (5,400ft) fresh water lake on Earth. The World Heritage site is also one of the world’s oldest lakes aged between 25 to 30million years old. Sediment deposited on the bottom is up to 4.3miles deep.
The lake contains rare fresh water seals and several species of fish found nowhere else on the planet.

Feel free to move this thread if appropriate

Yesterday I was watching an episode of 'weird or what?' on discovery science channel

They told the story of a man who found a perfect circle of ice slowly spinning in a river and investigated how it happens, and it's a perfectly natural phenomenon.

I'm amazed I had never heard of them before

Ice circles or ice discs are apparently best known in Scandinavia and other high-latitude regions.

Rynner posted some links to ice circle / disc stories that surfaced back in 2009:

... in the crop circles thread.

I can't seem to find an FTMB thread specifically dedicated to them ...

A giant spinning circle of ice has been spotted in a river in the US.

Experts say the phenomenon is extremely rare but entirely natural.

Ice Circle found in river in the Adrirondacks, NY :

Ace, I've not seen a video of one moving before ... thanks.

Wow. That genuinely is pretty impressive.

A rapidly freezing river in Finnish Lapland with pancake ice spinning around on a bend. This is an in-camera multiple-exposure. © Guy Edwardes Photography 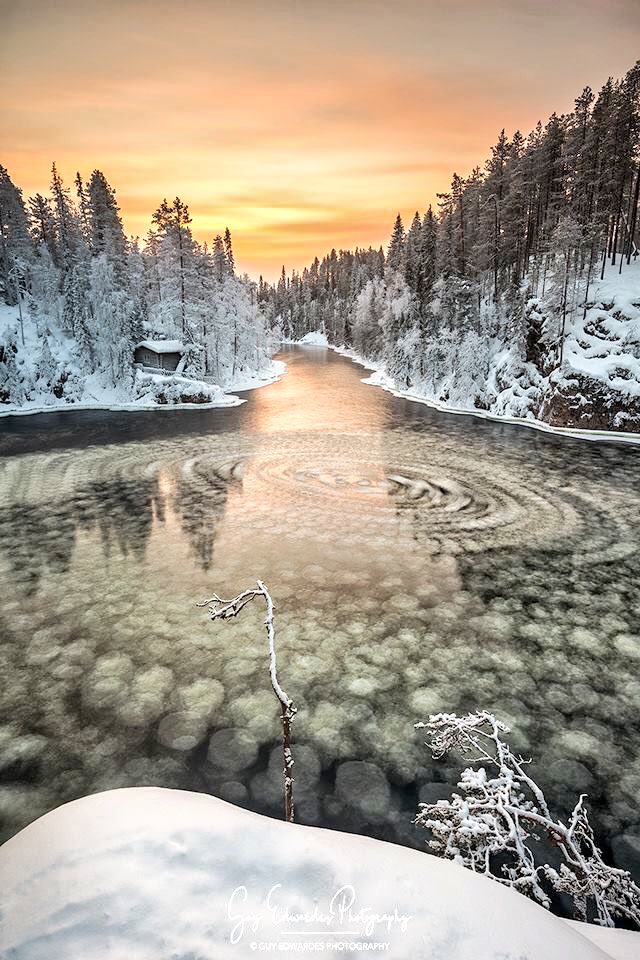 I once saw a rotating ice disk in a brook in the Czech Republic. It was 20 cm in diameter.

Ice pancakes in the Highlands...

Looks like the moon in a bucket! A very big bucket.

We have evidently reached the vandalism stage of the public’s fascination with Maine’s 300-foot-wide ice disk.
The massive ice structure presently drawing curious onlookers to its location in the Presumpscot River in the Westbrook suburb of Portland apparently piqued the interest of one New Jersey man on a mission. CBS-affiliate WGME reported that Christopher Angulo on Thursday attempted to carve a massive peace sign into the face of the circular ice formation.

Westbrook marketing and communications manager Tina Radel told Gizmodo by email that Angulo used a “used a chainsaw and pickaxe to cut chunks out of it and told some reporters he wanted to carve a peace sign.” 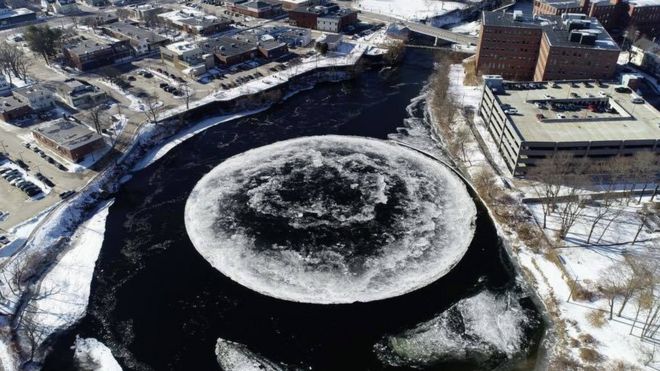 It seemed like harmless fun at the time tribble but when you punch ice so your other half can take interesting photos? .. ice can cut your hand, my scabs are mostly healed now and I won't be doing that again without gloves .. lesson learned.

I recommend 'Working Hands' ointment for that.

Mythopoeika said:
I recommend 'Working Hands' ointment for that.
Click to expand...

I recommend not punching ice in the first place.

Tribble said:
I recommend not punching ice in the first place.
Click to expand...

Listen to Tribble. Punching ice is not big or clever.

River Browney in County Durham got an ice circle last week. Video at

The big ice circle that formed in Maine (see post #16) is shrinking and disintegrating due to unseasonably warm temperatures.

The Portland Press Herald reports the disk in the Presumpscot River has lost most of the shape and appearance that made it look like a blue moon.

Westbrook spokeswoman Tina Radel says that the disk was on the move Wednesday and that its “time may be limited.” ...
Click to expand...

A very strange ice circle has been reported in Qinghai, China. This one looking like a combination of a crop circle and an ice circle.

China News reports an Ice Circle. Would the Zetas explain its meaning, and why the switchover to ice from crops? Does this also imply crop shortages? [and from another] / Hu Guilong Figure / Hengxiu Mai Tian Quan? posts us news of this very exciting ice circle in Qinghai, China. Great aerial photos from: chinanews.com [and from another] https://www.chinanews.com/tp/hd2011/2019/04-12/877218.shtml The mysterious figure of Qinghai Lake is not known. On April 12th, a giant mysterious figure appeared on the ice on the south side of Haitai, Qinghai Lake Erlang Sword Festival. According to the photographer, Qing Xiu, Qinghai Lake Tourism Group Co., Ltd., the deputy general Heng Xiu introduced the picture that was taken at 11 o'clock on the same day, the area is more than 100 square meters, the specific reasons for the Circle are unknown.
Click to expand...

Lord Lucan said:
A very strange ice circle has been reported in Qinghai, China. This one looking like a combination of a crop circle and an ice circle.

I like that. Probably easier to make than a crop circle, too. You could make this with string, pegs and a salt spreading machine. Or orbital laser, whichever is to hand.

Tribble said:
I like that. Probably easier to make than a crop circle, too. You could make this with string, pegs and a salt spreading machine. Or orbital laser, whichever is to hand.
Click to expand...

Impressive isn't it? Here's another image from higher up giving a better idea of it's actual proportions.
See just how big this thing is!
Last edited: Apr 16, 2019

Lord Lucan said:
See just how big this thing is!
Click to expand...

According to this short video, it's similar to car manufacturer AION's logo & is a publicity stunt..