Kenny has been mentioned on several threads, but he doesn't seem to have one of his own - till now!

Told with the help of some of his most famous comic characters including Cupid Stunt and Quentin Pose, the story of pioneering radio DJ and television star Kenny Everett's against-the-odds struggle to achieve both personal and professional fulfilment, as seen through the decade-and-a-half prism of his marriage to Lee Middleton.

Watched it last night. I adored Ken, thought him the funniest thing on Earth. This programme was interesting - as it didn't have the "God almighty, I didn't know they were like and/or into that" angle (as he was out and his up-and-down life well-doumented by the time he sadly passed), it threw the emphasis strongly onto his rise to fame and his relationship wiith his wife, Lee.

Perhaps as an inadvertant result of this, the part of Lee was actually better written and consequently more subtly played by Katherine Kelly. The actor playing Kenny, Oliver Lansley, did a good impersonaton, and looked a bit like him, but to be honest to me that's how it came across - a chap impersonating the Kenny Everett we all knew, as opposed to the Kenny Everett we weren't supposed to know, the guilt and uncertainty ridden one, who was so conflicted he tried to just end it all - that one poignant episode lightly brushed over in about two minutes.

All that said, it was affectionate, and kind to him, and worth watching.

stuneville said:
All that said, it was affectionate, and kind to him, and worth watching.
Click to expand...

I agree. Just finished viewing the iPlayer story. The 'Life Review' at the end was well done, I thought.

Can't really criticise the actor for being just an 'Impersonation' of Kenny, because Kenny was really a one-off. Nobody could match that.

And for old farts like me, the sound track of a medley of 60s and 70s pop tracks helped define the mood.
W

Given that Kenny was a recording buff, and his wife a medium, I wonder if they experimented with EVP?

Did include him addressing the Young Tories Conference: Lets kick Michael Foots stick away! Lets Nuke the Russians!

It did, yeah, but it also had him telling the Margaret Thatcher joke that got him kicked off Radio 2. It was well meaning, but did Kenny really talk like that all the time? According to this he was always "on".

Also worth checking out on iPlayer is the Top of the Pops episode he hosted which was on before this, and the compilations of his BBC shows. If you go to BBC Radio 4 Extra, they're repeating his Captain Kremmen serial, all on listen again and very funny (and amazing what he was allowed to get away with).

And a radio documentary from 2007:

A documentary revealing how the wizard of the wireless went about keeping himself on-air after BBC Radio 1 sacked him in 1970. 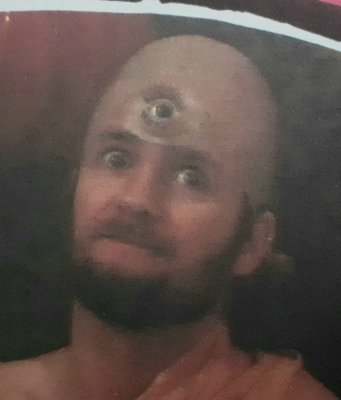 Here's Kenny dressed up as our old chum T.Lobsang Rampa.

I vaguely remember him on TV as a kid, the few clips I've seen as an adult seemed like puerile rubbish. I was going to type "his comedy gave me AIDS" but then I thought better of it.

Maybe you had to hear him on the radio to really appreciate what a genius he could be, but I watched the box set of his Thames TV shows a year or so ago, and laughed a lot. I have no problem with silly men who purely wish to entertain.