A California elementary school teacher was arrested Wednesday after police discovered an estimated 300 to 400 pythons --both alive and dead -- in his Santa Ana home.

"Some [were] in boxes, some in crates and some crawling around," Santa Ana Police Cpl. Anthony Bertagna said, according to ABC Los Angeles.

The station tweeted the following photo from inside the house, provided by Santa Ana police:


William Fredrick Buchman faces animal cruelty charges. Police found the snakes while serving a search warrant at his home. Police described the stench in the home as "God-awful," according to NBC Los Angeles.

Investigators were responding to complaints from neighbors about the foul odor coming from the home.

The house was also said to be infested with mice and rats.

Yeah, I was puzzled by that as well.

He was causing a catastrophe.

A Burmese python suspected of eating multiple cats from the same neighbourhood has been caught in the US, police say.

The 12-foot-long snake was discovered resting in some waist-high underbrush by police in Port St. Lucie, Florida.

Officers responded to reports of an “extremely large snake”, suspected of feasting on several neighbourhood cats, in an empty plot of land.

A number of pet cats have mysteriously disappeared from the area over the past nine months, police say. ...

USA: A nine-foot Colombian boa constrictor named Trinity that escaped from its cage in the US has been found after two days on the loose.

Trinity did not appear to have travelled far after being spotted in the garage that holds the snake’s cage in Nampa, Idaho.

Worried neighbours with small pets and children went on alert after the owner reported to Nampa police that the snake had disappeared and had not eaten for three weeks. The owner says he plans to buy a better cage.

oldrover said:
I was hoping you'd pop along and settle this. I didn't even know that anyone had been eaten by a Boa Constrictor. Any chance you can point me to the source of this.
Click to expand...

Boa constrictors are far too smell to eat humans but on rare occations larger snakes have killed and eaten people.

Fascinating account of some very large snakes in Borneo, capable of eating human children. It's entirely possible that these were massively overgrown pythons, or the last remaining remnants of Titanoboa.

Hundreds of years ago, eight children were taken from a village in Borneo - by "dragons". What were these terrifying beasts?
Several centuries ago, a group of Borneo natives left their villages and headed deep into the jungle, searching for a home away from the Dutch colonialists who had begun spreading across their island. Eventually, they found a nice spot in the lowland rainforests near the mountains in Borneo's centre. They built houses and cultivated crops, and caught fish from the Burak river. All was well. Then children began vanishing.
Click to expand...

Rest of article at link.

Actually crocodiles are the heaviest reptiles at over two tons.

oldrover said:
I was hoping you'd pop along and settle this. I didn't even know that anyone had been eaten by a Boa Constrictor. Any chance you can point me to the source of this.
Click to expand...

Not the boa constrictor but large pythons and anacondas.

Despite rumors of larger snakes, the longest snake officially recorded was a reticulated python shot in 1912, in Sulawesi Indonesia. It measured a jaw-dropping 10 m (32 ft 10 in).

“The Wildlife Conservation Society offers a large reward for the delivery of a 30-foot snake, in good health, to the Bronx Zoo. This award has been active since the days of President Teddy Roosevelt (1910). The reward currently stands at $50,000. There have been no giant snakes presented for the reward during this time.

That is not to say another 30+ ft snake doesn't exist. Likely being either a green anaconda, a Congo python or a reticulated python.

BTW a 20+' reticulated python has killed a slender man. They break the shoulders 1st.

Jim said:
BTW a 20+' reticulated python has killed a slender man. They break the shoulders 1st.
Click to expand...

Good to know slenderman has a natural predator.

Constrictors do attack both man and beast, they can be nasty buggers.

Jim said:
Constrictors do attack both man and beast, they can be nasty buggers.

Some more facts about the worlds largest snakes: Pythons and Anacondas.

My favourite big-snake factoid is that the only animal whose common name in English is also the scientific Latin name for the species is boa constrictor.

Hiroshi Motohashi was angry with the management of the Studio City sushi restaurant, so police said he decided to leave something for other customers to remember him by.

Instead of "dropping the mic" after a memorable rant, officials say the 46-year-old man dropped a 13-foot-long snake in the middle of the restaurant — then slithered out.

It's died now, apparently. I was pretty sad to hear this.

Update: Monty has been found.

Back in September, a dude who neighbors knew only as “Alex” promised the trouble was over. His 11-foot python was done escaping his East Atlanta Village home and startling residents.

But on Friday afternoon, Alex was spotted knocking on doors asking a familiar question: Have you seen Monty?

Alex, who’s declined to give his last name, told The Atlanta Journal-Constitution he’s actually not positive the snake isn’t somewhere in his house. But Monty, described by the owner as an expert escapist, got out ...

When you own an eleven-foot python who has escaped previously, you tend not to need to go door to door--they'll get in touch with you.

Authorities say firefighters have rescued an Ohio woman after a boa constrictor wrapped around her neck and began biting her face.

The Elyria Chronicle-Telegram reports the unnamed 45-year-old Sheffield Lake woman called 911 Thursday afternoon asking for help. The boa constrictor was one of two snakes she'd rescued the day before.

Firefighters found the woman lying in the driveway of her home with the snake wrapped around her neck and biting her. A firefighter used a pocket knife to cut off the snake's head.

The woman was taken to a hospital for apparent non-life threatening injuries. The woman had 11 snakes, including nine ball pythons and the boa constrictors. ...

Perhaps she should try rescuing and keeping cats from now on?

Here's my non-experience with a cryptid snake. I grew up not far from the Premier Mine Dam (http://www.industryabout.com/countr...th-africa/hydro-energy/38437-premier-mine-dam) and as kids we often went fishing there. In my teens I sometimes camped in the wilderness there for a few days at a time.

Then two kids drowned in the dam. Among the local population the story rapidly spread that they were in fact caught by a giant snake that lives in the dam, and worried people begged me not to go camp there anymore. So of course I did just that.

Enough to give you constipation.

A five-year-old boy was shocked to discover a python inside his toilet when he lifted up the lid.

He was "frantic" when he found it in the bathroom at home in Southend, Essex, his mother Laura Cowell said.

"It smelt of bleach and a bit toilet-y," Ethan Pinion from the store said. The snake "most likely came up the u-bend" and is expected to recover fully. ...

ramonmercado said:
Enough to give you constipation.

A five-year-old boy was shocked to discover a python inside his toilet when he lifted up the lid.

He was "frantic" when he found it in the bathroom at home in Southend, Essex, his mother Laura Cowell said.

"It smelt of bleach and a bit toilet-y," Ethan Pinion from the store said. The snake "most likely came up the u-bend" and is expected to recover fully. ...

A snake that shocked a family when they discovered it in their toilet might have been on the loose in the area for about two months, it has emerged.

Reggie the royal python appeared when a five-year-old boy opened the lid in his family bathroom in Southend.

Following media coverage of the snake's rescue his owner has now come forward.

Reggie escaped when Tim Yardley moved a few houses away and he had almost given up hope of ever finding him. On social media he apologised to his neighbours.

The harmless snake, measuring about 3ft (91cm) petrified Laura Cowell and her son when it appeared in the family's home on Wednesday.

Decent of him to take the snake home instead of just calling the RSPCA.

A man was on his morning jog when he stumbled across a 7ft (2.13m) boa constrictor in a brown pillow case.

He was running in St Neots, Cambridgeshire, when he spotted the non-poisonous snake in bushes and took it home before the RSPCA collected it.

Inspector Stephen Reeves said that it was healthy and suspected the owner "just no longer wanted him".

The charity wants to rehome the snake, which has been taken to South Essex Wildlife Hospital.

Mr Reeves added: "We believe people are unaware of how much of a commitment these animals are, and once they grow in size they can no longer cope."

The RSPCA has urged the owner of the snake, which was found on Wednesday, 29 November, to come forward.

Strewth! I bet Maximus Otter would have wrestled with this. 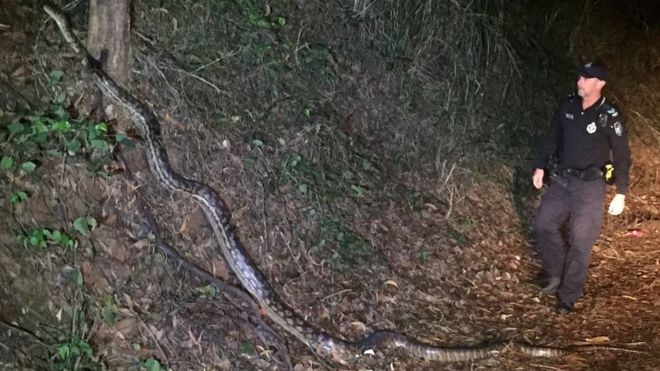 A photo of an Australian police officer encountering a python has drawn a large reaction on social media.

The officer and his partner were on a night patrol in northern Queensland when they came across the "monster" scrub python on a road, police said.

Spotting an opportunity, the officers snapped a picture with the reptile.

"Fair to say that the snake was over five metres [long] but not really the type of reptile that you want to take a tape measure to," police told the BBC.

Queensland police shared the photo, taken earlier this year, across its social media accounts on Monday. They said it had since received more than two million views and 10,000 comments.