Neptune's first orbit: a turning point in astronomy
As Neptune nears a historic orbit around the Sun, Robin McKie recalls the dramatic story of how the icy world was discovered
Robin McKie The Observer, Sunday 10 July 2011

Astronomers will celebrate a remarkable event on 11 July. It will be exactly one year since the planet Neptune was discovered. Readers should note a caveat, however. That year is a Neptunian one. The great icy world was first pinpointed 164.79 years ago – on 23 September 1846. And as Neptune takes 164.79 Earthly years to circle the sun, it is only now completing its first full orbit since its detection by humans. Hence those anniversary celebrations.

And there is much to commemorate – for Neptune's discovery marked a turning point in astronomy. Its existence was revealed, not through a serendipitous observation by an astronomer but by the careful work of mathematicians. They calculated that perturbations in the orbit of Uranus, then thought to be the sun's most distant planet, could only be explained by the existence of another, even remoter world whose gravity was affecting Uranus's path.

The mathematicians – Englishman John Adams and Frenchman Urbain Le Verrier – made their calculations separately. Both agreed, however, where in the sky astronomers would pinpoint the planet causing those perturbations.

This article repeats a story that is as much myth as fact. Adams and Le Verrier based their calculations on Bodes Law, so they both assumed a much bigger and more distant planet than Neptune turned out to be as the perturbing agent. So their calculations agreed with each other, but not with reality!

It was really a fluke or a coincidence that Neptune just happened to be near the predicted position. (Remember that this position was given in terms of celestial co-ordinates, similar to Lat and Long - but the calculated distance would have been much greater than Neptune's...) So in fact Neptune's discovery was a "serendipitous observation" after all.

But no doubt this legend of the triumph of science will continue for a few more Neptunian orbits!

Astronomers have found a new 100km diameter Trojan asteroid near Neptune.
Trojans are a type of asteroid found in space graveyards. They shed light on what the early Solar System was like.
Scientists say up to 150 similar objects could await discovery in the same area.

“I deduced that the forces which keep the planets in their orbs must [be] reciprocally as the squares of their distances from the centers about which they revolve: and thereby compared the force requisite to keep the Moon in her Orb with the force of gravity at the surface of the Earth; and found them answer pretty nearly."
Newton's theory enjoyed its greatest success when it was used to predict the existence of Neptune based on motions of Uranus that could not be accounted for by the actions of the other planets. Calculations by both John Couch Adams and Urbain Le Verrier predicted the general position of the planet, and Le Verrier's calculations are what led Johann Gottfried Galle to the discovery of Neptune.
http://en.wikipedia.org/wiki/Gravitation
Click to expand...

The Discovery of Neptune according to Charles Fort
Leverrier calculated that the hypothetical planet was at a distance from the sun, within the limits of 35 and 37.9 times this earth's distance from the sun. The new planet was found in a position said to be 30 times this earth's distance from the sun. The discrepancy was so great (25%) that, in the United States, astronomers refused to accept that Neptune had been discovered by means of calculation: see such publications as the American Journal of Science, of the period. Upon August 29, 1849, Dr. Babinet read, to the French Academy a paper in which he showed that, by observations of three years, the revolution of Neptune would have to be placed at 165 years. Between the limits of 207 and 233 years was the period that Leverrier had calculated. Simultaneously, in England, Adams had calculated. Upon Sept. 2, 1846, after he had, for at least a month, been charting the stars in the region toward which Adams had pointed, Prof. Challis wrote to Sir George Airy that this work would occupy his time for three more months. This indicates the extent of the region toward which Adams had pointed. Charles Fort, New Lands.
Click to expand...

The Hubble space telescope has discovered a new moon orbiting Neptune, Nasa has confirmed.
Designated S/2004 N 1, this is the 14th known moon to circle the giant planet.
It also appears to be the smallest moon in the Neptunian system, measuring just 20 km (12 miles) across, completing one revolution around Neptune every 23 hours.

US astronomer Mark Showalter spotted the tiny dot while studying segments of rings around Neptune.
Nasa said the moon was roughly 100 million times dimmer than the faintest star visible to the naked eye.
It is so small that the Voyager spacecraft failed to spot it in 1989 when it passed close by Neptune and surveyed the planet's system of moons and rings.

Mr Showalter's method of discovery involved tracking the movement of a white fleck appearing over and over again in more than 150 photographs taken of Neptune by Hubble between 2004 and 2009.
"The moons and arcs orbit very quickly, so we had to devise a way to follow their motion in order to bring out the details of the system," Mr Showalter explained.
"It's the same reason a sports photographer tracks a running athlete - the athlete stays in focus, but the background blurs."

Neptune has been revealed in never-before-seen detail.

The most distant planet from the sun was captured in astonishing detail after experts used lasers to upgrade the world's most powerful land-based telescope to capture the most intimate portrait of the breathtaking blue orb to date.

The technique corrects for the effects of atmospheric turbulence above the observatory, based in the deserts of northern Chile.

Scroll down for video 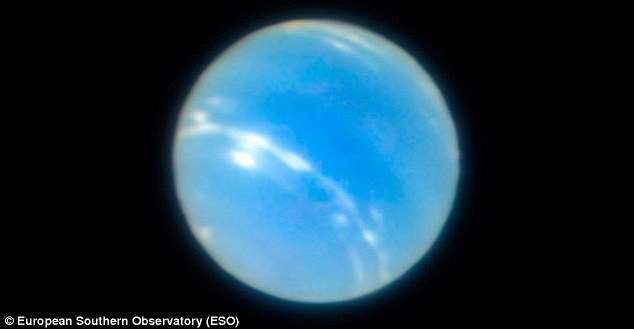 +4
Stunning images of the most distant planet from the sun have been beamed back to Earth in astonishing detail. Experts used lasers to upgrade the world's most powerful land based telescope to capture the most intimate portrait of the breathtaking blue orb to date (pictured)


An upgrade to the array, which is made up of four telescopes, lets researchers use a process called the laser guide star facility on the VLTs Unit Telescope 4 (UT4).

It allows for more precise imaging over a comparatively wide field of view, capturing clusters of stars in the night sky, as well as close details of individual celestial bodies.

WHAT IS ESO'S ADAPTIVE OPTICS AND HOW DOES IT HELP US TAKE BETTER IMAGES OF THE COSMOS?

Adaptive optics is a technique to compensate for the blurring effect of the Earth's atmosphere, also known as astronomical seeing, which is a big problem faced by all ground-based telescopes.

The same turbulence in the atmosphere that causes stars to twinkle to the naked eye results in blurred images of the universe for large telescopes.

It's summer in Neptune's southern hemisphere, and it seems recent temperature fluctuations in the circa 40-year-long summer season can't be reasonably explained as merely seasonal phenomena.

Temperatures on Neptune Are Mysteriously Fluctuating, And It Doesn't Make Sense

An unprecedented analysis of changes in the temperature of Neptune has revealed something rather strange taking place at the most distant planet in our Solar System.

Far-flung Neptune, which orbits the Sun at about 30 times the distance of Earth, takes an accordingly long time to make its trek around the star: about 165 Earth years, in fact, meaning each season on Neptune lasts for over 40 Earth years.

Right now, Neptune's southern hemisphere is in the midst of an epic four-decade-long summer, but for reasons scientists can't fully explain, the temperature hasn't exactly been warming up – at least not in the gradual way we might assume.

A new study compiling 17 years' worth of observations of Neptune's temperature instead shows the opposite taking place, with readings indicating a mysterious globally averaged drop of about 8 °C between 2003 and 2018, as evidenced by a significant decline in atmospheric radiation from 2003 on. ...

As for why Neptune's atmospheric temperature seems to fluctuate so unexpectedly mid-season, we can't fully be sure, but the researchers think changes in atmospheric chemistry might be behind the variations seen. ...

Another explanation could be weather variations – which might affect atmospheric cloud composition and chemistry – including the effects of dark vortices seen on Neptune, which is another of the planet's enigmas we're still learning about.

Solar flux is also worth considering, the researchers say, noting that radiance changes brought about by the Sun's activity cycle might somehow be triggering photochemical changes in Neptune's atmosphere, which could again account for the temperature fluctuations we're seeing.

All we really know for sure is we'll need a lot more research to get to the bottom of these surprising readings – just the latest mystery associated with this obscure, faraway world. ...
Click to expand...

The observatory's infrared instruments highlight features not seen in such detail since the Voyager 2 probe flew past the planet in 1989.

These include the rings and dust bands that encircle the ice giant.

Scientists are also intrigued by the different cloud structures, which should tell them something novel about the workings of Neptune's atmosphere.

Beyond the planet itself are seven of the giant's 14 moons, the most significant of which is Triton.

"The longer wavelengths are brand new and could give us a window on to the deep circulation patterns, with a bright equatorial band that looks a bit like the bright bands of Jupiter and Saturn.

"Neptune's powerful storms are as active as ever, and the whole Neptune family is represented here, with those ring moons and Triton."

Neptune is the outermost planet in our Solar System, beyond Uranus and Saturn, but inside the dwarf planet Pluto.
It circles the Sun at a distance of roughly 4.5 billion km, and takes 164.8 years to complete one revolution.

Like the other outer Solar System giants, its atmosphere contains a lot of hydrogen and helium. But there is a very strong presence of ices, of water, ammonia and methane.

Neptune's diameter is close to 50,000km, or almost four times that of Earth.
Click to expand...

That flare around Triton is really annoying.

NASA’s James Webb Space Telescope shows off its capabilities closer to home with its first image of Neptune.

Not only has Webb captured the clearest view of this distant planet’s rings in more than 30 years, but its cameras reveal the ice giant in a whole new light.

Most striking in Webb’s new image is the crisp view of the planet’s rings – some of which have not been detected since NASA’s Voyager 2 became the first spacecraft to observe Neptune during its flyby in 1989. In addition to several bright, narrow rings, the Webb image clearly shows Neptune’s fainter dust bands. 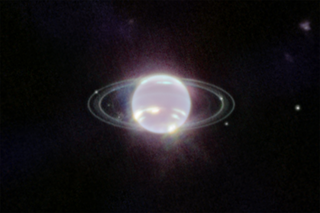 Webb’s Near-Infrared Camera (NIRCam) images objects in the near-infrared range from 0.6 to 5 microns, so Neptune does not appear blue to Webb. In fact, the methane gas so strongly absorbs red and infrared light that the planet is quite dark at these near-infrared wavelengths, except where high-altitude clouds are present. Such methane-ice clouds are prominent as bright streaks and spots, which reflect sunlight before it is absorbed by methane gas. 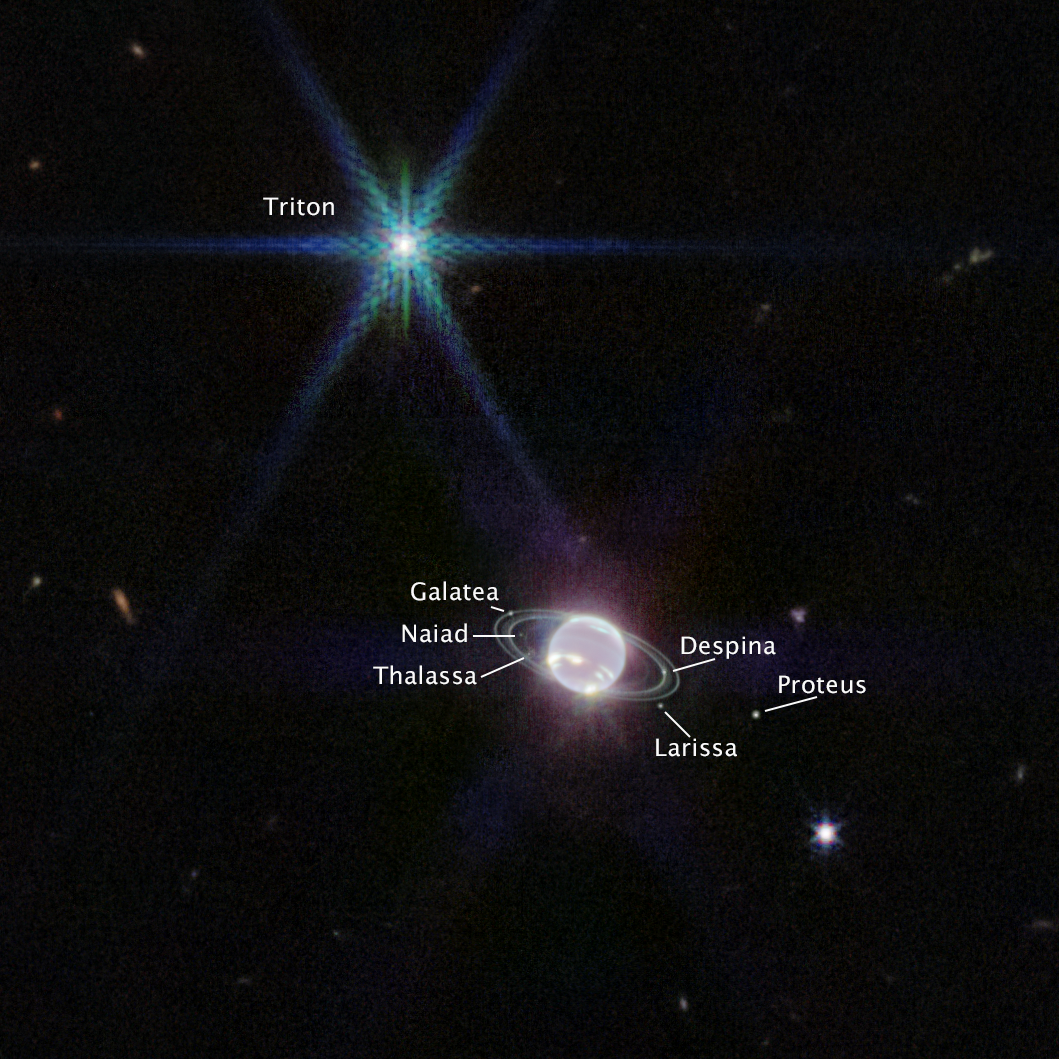 eburacum said:
That flare around Triton is really annoying.
Click to expand...

I can only see attack ships and c-beams.

Mythopoeika said:
I can only see attack ships and c-beams.
Click to expand...