1: before, during and immediately after directing cult classic film 'CLERKS' .. he wasn't a stoner. He played one onscreen as Silent Bob, half of the duo Jay and Bob who sold weed outside of the QuickStop.

2: Jay wasn't a stoner during that film: Jay was a heroin addict (maybe he also smoked the odd spliff during this time. I don't know).

3: During all, of this and to date, Kevin Smith was clean of doing any dugs. We're led to believe.

4: Jay wasn't able to star in any way in 'Jersey Girl' because Jay was, at the time, on the run from the police for driving with a deployed airbag. Jay gets sent to rehab. The airbag thing gets a jokey mention in CLERKS 2

5: Fast forward to recent(ish) times and Jay is 100% clean (and I actually believe him) but, and here's the reason I posted this in this thread, Kevin Smith has decided to take up smoking pot ? .. fair play to him and all but after detoxing his best mate over about a decade or two, why has he decided to start getting high for the first time ever ?
Click to expand...

After his recent heart attack, maybe he thought he needed to find a way to calm down? A bit drastic, though - meditation would be so much healthier.

Mythopoeika said:
After his recent heart attack, maybe he thought he needed to find a way to calm down? A bit drastic, though - meditation would be so much healthier.
Click to expand...

He started toking before his heart attack and after years of helping his mate Jay to become clean.

Mr Adunbi of Easton, Bristol, was charged with a racially aggravated public order offence following an incident at a betting shop in Stapleton Road, Bristol, on 29 March.

He has been released on conditional bail to appear at Bristol Magistrates' Court on 22 May.
Click to expand...

Hardly any info about the incident though, just loads about him being tasered by a police officer. She is being charged too.

Hardly any info about the incident though, just loads about him being tasered by a police officer. She is being charged too.
Click to expand...

Not a dot about what he did to earn this charge. He appears dready enough to be either a nazi rasta terrorist or a ganja peacenik. Who the fuk knows?

skinny said:
Not a dot about what he did to earn this charge. He appears dready enough to be either a nazi rasta terrorist or a ganja peacenik. Who the fuk knows?
Click to expand...

The fact the cop is being charged as well suggests a very interesting take. I bet her taser was charged!

The great Atlanta Paintball Wars of 2018 - rapper 21 Savage urged fans to start using paintball guns instead of real guns to reduce gun deaths, but it lead directly to the death of a small child...

The fun continues in The west Wing. 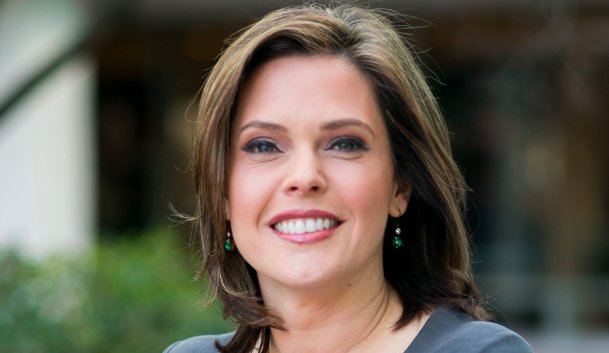 Who grassed on her?

The drugs minister has been accused of a “massive conflict of interest” after it emerged that her husband operates Britain’s largest cannabis farm.

Victoria Atkins has now stopped speaking for the government on cannabis and other aspects of her drugs brief. The Home Office said she had “voluntarily recused herself from policy or decisions relating to cannabis”.

To paraphrase Oscar Wilde: when you are minister to combat electoral fraud it is perhaps acceptable to have one constituency vicer chair arrested over electoral fraud but two looks like carelessness.

Two vice chairs of Norwich Conservatives, the local party of Chloe Smith, the minister in charge of fighting electoral fraud were arrested on Thursday

Mugshots.com owners charged with extortion. Here are their mugshots.

Mugshots.com works like this: they post pictures of your mugshots, publicize them as part of a public database of criminals and such, then charge you money to remove them. Here are the mugshots of two guys arrested on charges of extortion who are reportedly the site's owners—not coming down at any price.

Claude Kleynhans, 54, was hunting the animals in the Limpopo province in north east South Africa when a large male buffalo attacked him as he was loading a carcass onto a vehicle.
Click to expand...

Considering the problems with global warming, I found it ironic that industries in the UK are getting in trouble because they are running out of CO2.

hunck said:
Hunter shoots & kills buffalo & is then killed by another buffalo from the same herd
Click to expand...

Vampires in the Sun. You'd think they'd avoid that.

I found this wryly amusing with definite hints of irony; poachers out to kill rhinos for their horns, end up being eaten by lions.

I have no sympathy

I came across something the other day which struck me as ironic.

There was a lady from Norfolk who died just before the first world war whose initials were M.A.P. (I won't give her full name for reasons that will become obvious). She wrote in her will "my sole wish is that my name shall be utterly forgotten" and "my name is not to appear on any memorial tablet in any church … and no leaves or flowers shall be placed in or on my grave. My tombstone shall not cost more than £3 [she died a wealthy woman] and shall bear the inscription M.A.P.".

However, this was such an unusual statement in a will that a report about it got into the national press, and was published for example in the Daily Mirror. Thousands of people got to know her name through that report who would otherwise never have heard of her.

It gets worse. As luck would have it, the newspaper report was published on Tuesday April 16th 1912. The main headline on that day was the Titanic disaster (although these first reports stated that the ship had hit an iceberg but not sunk and nobody had been hurt, it was still big news). This newspaper has been endlessly reproduced in facsimile (which is how I got to read it) as the first report of one of the biggest news stories of the century.

So, M.A.P. of Norfolk wishes to be forgotten after her death. But she states her case so vigorously that the story makes the national papers, bringing her name to the attention of a wide readership. And this happens on the day that one of the most famous stories of all time is also published, meaning that day's newspaper is frequently republished for historical reasons, and her name is brought to a whole new readership down the decades that follow.

What is really ironic of course is that if she had just made no particular fuss at all her name would surely have been quietly forgotten within a few years.

Great story! You may as well name her now, she'll never know.

Don't worry everyone, Donald Trump arrives in three days to calm everything down.

Don't worry everyone, Donald Trump arrives in three days to calm everything down.
Click to expand...

asparagus said:
What is really ironic of course is that if she had just made no particular fuss at all her name would surely have been quietly forgotten...
Click to expand...

Now known as the Streisand Effect.

I follow Katie Hopkins on Twitter (let me explain: she is often too hateful for my taste, but I got a weak spot for her after reading of her struggle with epilepsy). This came by. On the one hand I find it very funny because it attacks Trump's ego. On the other hand I agree with her analysis. If this is the most original Trump's opponents can invent then we have a very long way to go (unfortunately). 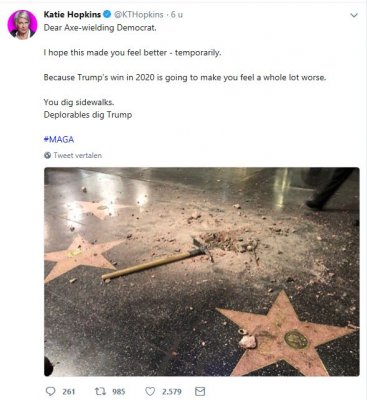 I see Kevin Spacey’s star got off lightly then.

Who's star is that?

Sorry, nevermind, I didn't realise he had a star