A Chinese organ harvesting / trafficking ring was busted, and the harvesters were convicted last July. However, this story is apparently surfacing in public view only now ...

Six people including several doctors have been jailed in China for illegally harvesting organs from accident victims, report local media.

The group had tricked the families of the deceased into thinking they were making official organ donations.

Between 2017 and 2018 they removed the livers and kidneys from 11 people at a hospital in Anhui province.

China is grappling with a huge shortage of organs and has struggled to meet demand through public donations.

According to local reports, the trafficking ring included four high-ranking doctors, some of whom worked in organ procurement in hospitals.

Local media said they would target car crash victims or patients who suffered from cerebral haemorrhage at the Huaiyuan County People's Hospital in Anhui.

The hospital's head of the intensive care unit, Yang Suxun, would approach a patient's family members and ask if they would consent to donating their loved one's organs. The family members would sign what would later turn out to be fake consent forms. ...

The person would then be wheeled out of the hospital in the middle of the night, and put into a van made to look like an ambulance where doctors would remove the organs.

The organs would then be sold to individuals or other hospitals which members of the trafficking ring contacted secretly, according to reports.

They were eventually found out when the son of one of the victims grew suspicious. ...
Click to expand...

‘They are butchering a human for money’: Afghanistan’s poor sell their kidneys on the black market

Each of the young men hoist up their long shirts, revealing foot-long scars running along the sides of their bellies. The line showing off these surgical remnants is only a fraction of those in the neighbourhood who bear the same marks. 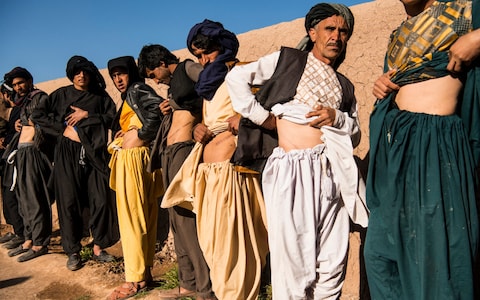 In this poor suburb of the western Afghan city of Herat, at least 32 people have such scars among only 150 families says Ebrahim Hakimi, a local elder.

All of the men have been driven by poverty and desperation to sell a kidney in a flourishing illegal trade which is preying on the poor of the city, he says.

“All of these men could have become robbers or taken up arms for money, but they didn't. What they had was their kidneys. They sold them for their families.”

The prospect of selling a kidney has become a financial lifeline for the city's most despairing, the men said. Poverty has combined with the desperation of those needing transplants to create a thriving black market.