Out Of Place Animals

Passed a dead Wallaby on the Fylde Coast today was going to stop on the way home and take a pic
but it had gone crows were picking at the large amount of blood n snot that was left,99% sure thats
what it was.

A rare fish thought to live in the southern hemisphere has washed up in Santa Barbara, California.

The appearance of the seven-foot (2.1m) hoodwinker sunfish has baffled scientists, who question how the fish made it so far from its home waters. An intern at the University of California spotted the animal at the Coal Oil Point Natural Reserve. It took researchers several days to properly identify the creature, which was only discovered in 2014. Photos of the giant fish first appeared on the Coal Oil Point Facebook page, and experts from around the world weighed in to help identify the creature.

View attachment 15359
Click to expand...
Mola Tecta was only 'discovered' (presumably as in discovered to be distinct from the regular ocean sunfish) in 2014. Therefore its distribution might not be fully understood yet.

Actually, it has visited the northern hemisphere before: this big guy was found in the Netherlands in the late 19th century and preserved. After the new species was declared, the museum who keep it re-examined the body and discovered it was actually a Mola Tecta.

I was wondering if Benny the Beluga was still in the Thames at Gravesend where it's been since July. The closest I've been able to find is this from the Standard, Jan 2019.

Whale still thought to be living in Thames, expert says

The expert turns out to be a man from the Port of London Authority. The last actual sighting seems to be Dec 14.

'Not what you expect in Doncaster': suspected piranhas found in UK lake

Gill Gillies, the assistant director of environment at Doncaster council, said given the natural habitat of piranhas, it was “highly unlikely” that either of the fish were alive at any time in the lake.
Gillies added: “We assume that these were pets that were placed in the lake, something that we would strongly discourage people from doing. The presence of a piranha is somewhat of a novelty so they have since been taken away by the Environment Agency for testing.

(Given piranhas like nice warm water... would they survive a chilly Yorkshire lake? Was it, as the person quoted implies, dumped and died soon after?)

A father has spoken of his shock after his children found a seven-foot boa constrictor in their garden.

Bruce Baker thought the youngsters were playing a prank when they told him to come and see the 2.1m-long snake. He and a neighbour had to coax the boa constrictor into a plastic box until the Scottish SPCA arrived at his home in the Scottish Borders. Efforts are continuing to try and trace the owner of the stray snake, which was captured in Innerleithen on Sunday. The boa constrictor, which is thought to be an escaped pet, has been taken to the Scottish SPCA rehoming centre in Edinburgh.

Need for regulation, registration and prosecution of offenders.

The RSPCA rescued more than 4,000 exotic animals from across England and Wales in 2018, it has revealed.

The animal welfare charity said this included 500 snakes, 300 turtles, 145 bearded dragons, five raccoon dogs, four marmosets and a wallaby. Some owners were not properly researching how to keep such species, resulting in animals escaping or being abandoned or neglected, it said. It also said general calls to its 24-hour hotline rose by 13% to 1,175,193.

In one incident, a dead marmoset monkey was found in a street in Edmonton, London in December 2018. And in January 2018, a royal python was found dead in Cwmbran, Wales, with bruising around its mouth. RSPCA inspectors suspected the snake had been beaten before it was abandoned.

Guinea pig found loitering at the 9th hole of golf course, doesn't let other golfers play through, gets evicted from club.

Tribble said:
Guinea pig found loitering at the 9th hole of golf course, doesn't let other golfers play through, gets evicted from club.

Normally an Indo-Pacific species, they're spreading & have reached the Med.

“They’re actually very placid,” said Prof Jason Hall-Spencer, a marine biologist, after spearing 16 of the exotic specimens in the space of 40 minutes in the inaugural “lionfish removal derby” off the island’s southern coast. “The problem is they are not part of the natural ecosystem and we are seeing them in plague proportions.”

“I can’t overstate how serious a problem this is for the whole of the Mediterranean,” he said, emphasising the risk of habitat destruction and species extinction. “Lionfish are the most damaging invasive fish we have ever seen. If action isn’t taken there will be lasting environmental and economic damage.”

Lionfish, he said, not only had no natural enemies, laboratory dissections had proved they were also furnished with ferocious appetites. “They eat everything. Culling this invasive species is the only effective way to reduce their numbers and ensure marine-protected areas continue to regenerate.”

scientists believe expansion works to the Suez Canal have also played a role, by enabling the toxic fish to migrate from native habitats in the Red Sea. The canal, which is one of the world’s most important waterways, was widened and deepened to cater for ever-bigger container ships only three years ago.

“That may have saved time and money but to do it without any biosecurity measures in place was mad,” Hall-Spencer said. “The oceans are bleeding invasive and damaging species into the Mediterranean like a cut artery.”
Click to expand...
“In all of this there is a silver lining,” he joked. “As firm-fleshed fish they taste absolutely wonderful. There’s definitely a niche market to be had putting lionfish on dinner tables.”
Click to expand...

ed; sorry it's so small - think the server shrunk the image due to file size or something. It is actually twice this size. And funnier that way. 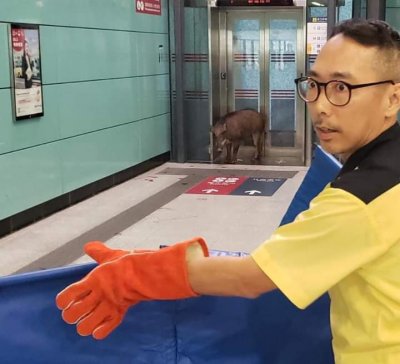 View attachment 18199
Click to expand...
For context: https://www.scmp.com/news/hong-kong...res-woman-kennedy-town-mtr-station-after-gory
A lady was injured. So was the pig.

haha The look on the official's face is priceless.

Loving the file photo there, but disappointed that there isn't a video of said wallaby.

Location
Having a nice cup of tea and a sit-down.

Schrodinger's Zebra said:
Loving the file photo there, but disappointed that there isn't a video of said wallaby.

Click to expand...
According to https://www.thejournal.ie/wallabies-lambay-island-2-3516673-Jul2017/ there is a population of 100+ red-necked wallabies on an island off the coast of Dublin. Owned by the Baring family (Baring's Bank) they were brought to the island in the 1950s and apparently the climate of Ireland is not dissimilar to Tasmania.

Maybe one or two stowed away to the mainland
Last edited: Jul 20, 2019

Schrodinger's Zebra said:
Loving the file photo there, but disappointed that there isn't a video of said wallaby.

Click to expand...
There is a video at the link above.

Mythopoeika said:
There is a video at the link above.
Click to expand...
Hmm, strange... I can't get one to show up when I click the link. There's just the photo (and text of course).

Now it could be down to one of my add-ons but it's too late at night to figure out which one; but now that I know there is a video, I'll try again tomorrow
S

Schrodinger's Zebra said:
Hmm, strange... I can't get one to show up when I click the link. There's just the photo (and text of course).

Now it could be down to one of my add-ons but it's too late at night to figure out which one; but now that I know there is a video, I'll try again tomorrow
Click to expand...
Try going to www.breakingnews.ie, you might be able to run video on the news page.

There are several colonies of wallabies (what a mellifluous phrase!) in the UK:

ScarlettR said:
Try going to www.breakingnews.ie, you might be able to run video on the news page.
Click to expand...
Thanks... it turned out to be Ghostery blocking the video... temporarily pausing that allowed me to view it.

maximus otter said:
There are several colonies of wallabies (what a mellifluous phrase!) in the UK:

maximus otter
Click to expand...
Ooh I never knew that, thanks!

Oi Ramon! You told us you were down there visiting your Mamy when all this time you were releasing the wallabies!

He's not to be trusted, folks. Lock up your joeys!

skinny said:
Oi Ramon! You told us you were down there visiting your Mamy when all this time you were releasing the wallabies!

He's not to be trusted, folks. Lock up your joeys!
Click to expand...
Ramon wouldn't release wallabies down among the culchies: they might eat 'em!

Indeed. I would release genetically enhanced platypi to eat the boggers.
S

Introduced by William Randolph Hearst who built a collection of various wild animals on his estate. When he hit hard times most were given to wildlife reserves or zoos but the Zebras were just released & now live wild on the land surrounding his ex home. There were 113 in 2016.

Swiss authorities have suspended their hunt for a duck-devouring caiman reported from one of their lakes. They don't disbelieve the report; they've just decided to let it be.

This caiman went: Swiss authorities say they’re calling off the hunt for an alligator-like reptile spotted in an inland lake, declaring it “a phantom.”

The meter-and-a-half (5-foot) long caiman was spotted by a fisherman in Lake Hallwil, about 50 kilometers west of Zurich, on July 14 when it briefly surfaced and scarfed down a duck.

Police considered the report credible, saying the caiman — indigenous to Central and South America — was likely an abandoned pet.

He says “he isn’t doing any harm, it’s like a kangaroo roaming around freely here — it doesn’t belong, but it doesn’t hurt either.”

The skeleton was found when the floor of one of the classrooms at Ysgol Bodringallt, in Pentre, Rhondda Cynon Taff, was lifted during renovation work on Wednesday.