Out Of Place Animals

gordonrutter said:
I think I’m correct in saying someone recently changed the title to add Rest in Piece to get around that problem.
Click to expand...

Well, thank goodness it was just one piece.
S

Another crocodile sighting in Germany, this time in Hessen. According to news sites, a young crocodile about 1m in size was spotted on the 27th of August near a brook. The man who saw it also took a picture, which has been confirmed as being authentic. There have been no further sightings of the animal since then.

I couldn't find anything showing the actual photo, so I'm assuming it hasn't been released to the public.

Apologies in advance - this won't be as dramatic as some of the other episodes related here.

The weekend of the 8th 9th August - that ridiculously hot one - I was in London, staying within spitting distance of Marylebone Station.

I'd gone out for a pint and an evening stroll and was walking back along the north side of Dorset Square towards Balcombe Street when out of the corner of my eye I spotted movement on the road just under the front end of a car I was about to pass.

I thought at first that it might have been a fox’s brush, sweeping the road as the animal sidled away from me, but as I got closer and focused, I realised it was something else: A rat – no. A rabbit - hmm? Then I noticed the black tips to the ears.

I would swear it was a brown hare! In central London?

It looked like a young animal, a fairly well grown but not yet mature leveret, but I would swear to my dying day that it was a hare.

All the references I can find to hares in Central London claim that they were there were once, but are no more. Regent’s Park is mentioned as having been home to a population, and that’s pretty close to Dorset Square (the central private green space of which is relatively small).

I’m farm born – and spend a lot of my time in the countryside. I would still entertain the possibility that I got it wrong, or that maybe I spotted an escaped pet rabbit of some breed that has black tips to it’s ears and looks like an immature hare. But I really hope I’m right. I love brown hares – if I ever need a totem, they would be it.

I was out on the farm a week or two ago, when I spotted one of the many hares on it moving steadily in my direction. On a whim, I froze in place. Despite the fact that I was standing in plain sight, away from any hedge or cover, on came Mr. Hare. Long story short, he strolled by so close to me that I could have nudged him with a barely-outstretched foot. As he passed I smiled, and felt compelled to say to him "Good morning, Mr. Hare!" He just paused for a heartbeat, gave me a quizzical look and ambled off.

A colony of Australian snakes in Western New Zealand? https://thespinoff.co.nz/society/03-09-2020/i-went-hunting-for-the-legendary-snakes-of-the-west-coast-bush/?fbclid=IwAR1fN6Ahs_ZqvlNLEPiR7qlzpD8rTHMDM3ceCkdD7iKh0KmhwBABMgDDz5E

Spookdaddy said:
I love brown hares – if I ever need a totem, they would be it.
Click to expand...

Nice accurate posting.
I'm a bit like that with deer, raptors and ravens, see them wherever I go.

maximus otter said:
As he passed I smiled, and felt compelled to say to him "Good morning, Mr. Hare!" He just paused for a heartbeat, gave me a quizzical look and ambled off.
Click to expand...

As a kid I would go to Rye Harbour and just sit with my back to the old tank traps and watch the hares in Springtime going mad,they'd come right up to you if stayed still.

On a walk round the Isle of Sheppey a few years back we came across a sort of hare sanctuary - must've seen about 20 or 30 young ones. Never seen so many.

I almost trod on one once on another walk. It was in a shallow scrape in the ground & I never saw it until it shot off at a rate of knots from almost under my foot.

I think they're the UK's fastest wild animal.

hunck said:
...I almost trod on one once on another walk. It was in a shallow scrape in the ground & I never saw it until it shot off at a rate of knots from almost under my foot...
Click to expand...

I remember as a wee crumbsnatcher walking one wild autumn afternoon with my grandad and his brother in law. We were up by a small reservoir - a place which had a slightly unsettling atmosphere at the best of times, not helped by the low frequency hum from the machinery in the pump house and the wind whistling through the ragged woods that surrounded it.

A hare broke cover and bolted when we were almost on top of it. We all jumped right out of our skin - off the ground, I reckon. My grandad and his brother in law were both veterans, who had gone on to work in very heavy industry - and would most likely have punched a marauding tiger right up its bracket under normal circumstances. I however was probably around six years old, and therefore had an excuse.

We're going off on a tangent, I know - but for anyone who is fascinated by the animal, I would recommend George Ewart Evans' classic, The Leaping Hare, and also Simon Carnell's Hare, from Reaktion Books lovely Animal series.
Last edited: Sep 4, 2020
S

St. Patrick must have been on a fag break.

maximus otter said:
St. Patrick must have been on a fag break.

I'm not quite sure how to take that sentence.

Lord Lucan said:
I'm not quite sure how to take that sentence.
Click to expand...

The "bearded vulture" - dubbed "Vigo" - was snapped by photographer James Lowen near Dereham, Norfolk, on Monday.

The RSPB said the bird hatched and fledged in southern Europe last year, but had "wandered up" to the Peak District for the summer.

Mr Lowen said he saw "a huge bird surrounded by crows", and "pulled over and took a photo".

The bearded vulture eats only bones, which it is known to drop from high points onto rocks to break up
Click to expand... 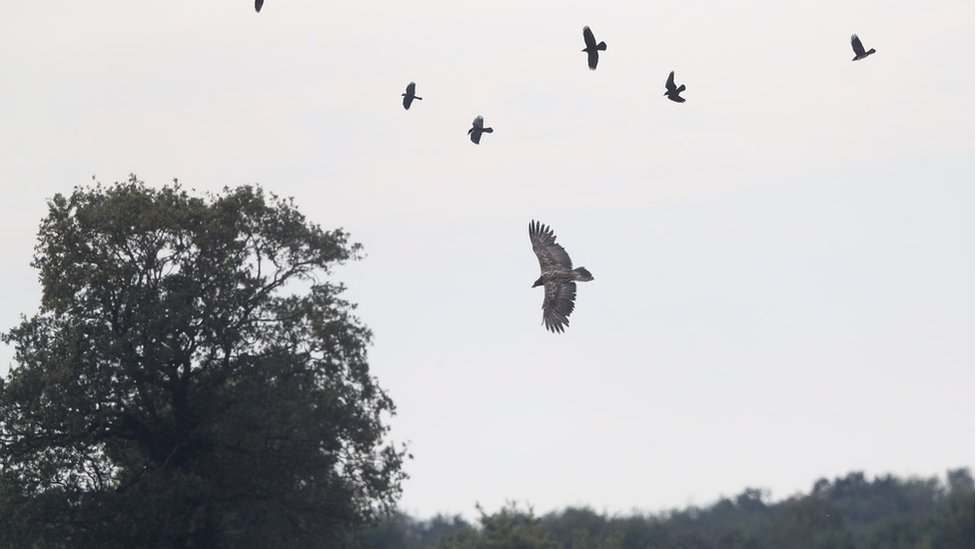 The extraordinary looking and unusual creature that washed up on a Welsh beach.

A large elephant seal that took a wrong turn and ended up wandering the streets of a Chilean town was guided back to the water by a group of police, navy officers and concerned locals.

Residents of Puerto Cisnes said they sometimes spot elephant seals far out in the water, but it came as a shock to see one wandering down the middle of a street several blocks from the shore. Witnesses said the seal was not acting aggressively, but appeared confused and frightened. ...

Police, navy officers and neighbors used black tarps to get the large animal to turn around and head back toward the water. ...
Click to expand...

My first thought was crikey that's a big snail.

The "bearded vulture" - dubbed "Vigo" - was snapped by photographer James Lowen near Dereham, Norfolk, on Monday.

Vigo was also sighted in and around Peterborough. What on Earth makes a bird accustomed to mountains make a stop over at a town on the edge of the Fens?

PeteByrdie said:
Vigo was also sighted in and around Peterborough. What on Earth makes a bird accustomed to mountains make a stop over at a town on the edge of the Fens?
Click to expand...

When it was spotted in the Peak District in July it was speculated it may've been caught in a storm & blown away from it's home in the Alps but that seems a bit unlikely.

Some good pics from Lincolnshire on this blog & unconfirmed report it's since gone further south & been seen over the RSPB HQ in Sandy Bedfordshire & later over London.

The Vulture conservancy now have a couple of her feathers so we should at some point understand her a little better. It should also be noted that they are keeping a close eye on her movements and the threat each one makes to her. It is considered that her current location can provide food and shelter with the main threat to her being traffic and turbines.
Click to expand...

An escaped cow in Australia wandered onto a trampoline and became stuck there.

Wandering cow gets stuck on a trampoline in rural Victoria

A bid to follow the herd turned out badly for a lone cow that got stuck on a trampoline in rural Victoria overnight.

The drama unfolded when a mob of about 40 cows went on a run in the dead of night in South Gippsland.

The herd was rounded up after a truck driver saw cattle in the middle of the road and doorknocked the nearest house.

Neighbours were woken to find cows scattered in their yards, and the mob was guided home.
But when dairy farmer Kay Laing did a second check of her yard to be extra sure, she found a black and white cow stuck on her in-ground trampoline. ...

“I would love to have seen her get on. I’m sure she must have been thinking, ‘What the hell?’ Anyway she ended up just plonking down and just sat.

“Thank God it was night time and she couldn’t see either because I’m tipping she would’ve been pretty terrified.”

Her neighbour brought his tractor around and, with some chains and a hoist, got the cow on solid ground.

“She was just fine, we lifted her off and then she walked home, maybe a kilometre and a half.

The Bearded Vulture (Vigo) that spent the summer in the Peak District and was recently wandering around Eastern England shed a couple of feathers that someone collected. He sent them off, I assume to the Vulture Conservation Foundation, (they do great work re_introducing them back to their old European habitats). Turns out Vigo is a wild bred female from the French Alps doing what young vultures often do, going for very long wanders. Few days ago she turned up at Beachy Head, I was going to have a look for her as only 20 miles West of me, but someone watched her soaring and gaining great height, was so high almost out of sight, she then drifted off over the Channel on her way back home. Hope she makes it back safely.
Oddly, many years ago when on holiday in Majorca, I looked up and saw two massive birds gliding high over. When I got back to England checked my bird books and went to the library (pre interweb days), Bearded vulture best match.
You must log in or register to reply here.
Share:
Facebook Twitter Reddit Pinterest Tumblr WhatsApp Email Link
Top