Wonderful news :4 year old Cleo Smith has been found by police in a house in Carnarvon in Western Australia alive and well.

skinny said:
I do. The buggers nuked the homelands of several indigenous clans in northern SA and blew their dreamings to hell and caused myriad health problems. I studied the legacy at uni and apparently there are still pounds of plutonium dusting up out there in the dead zone which the Brits refuse to clean up. And our own government welcomed the testing program. I don’t dislike the Brits, but this issue soured my attitude to their historical impact throughout Australian history. Vulgar brutality and ignorance. Which is still endemic in Oz culture today. So much for the lucky country.
Click to expand...

These are the lads Brit command used as test fodder.

skinny said:
These are the lads Brit command used as test fodder.

Their lives were totally messed up by that.

As ever. Yet they have that aged dignity the young can only crave. I respect that, above and beyond their longevity and the things they went through. Dignified. If I’d have done those interviews I’d have worn a tie. And I hate ties. Bless those men.

“The Catch Up” Warrick Eady

They can't be real Australians... not one of those pints has been touched!
I like that painting.

5 generations of Australian soldiership catching one another at that age. I think the point of the full pint glasses is significant. Worth dwelling on. First impressions are that it signifies the raw enthusiasm of youth before war beats them down to empty.

Afghanistan is the tall sad looking guy being welcomed into the fraternity. He's recently died and hasn't yet realised that age shall not weary them nor the years condemn. The others are rested and content that their duty is done.
Last edited: Nov 11, 2021

Doing some web surfing around Sydney, came upon this page of the Harbour before the Bridge went up in the early 1930s. The last pic is remarkable. What a feat of gravity-defiance it is.
https://www.buzzfeed.com/annamendoza/bring-your-passport-were-taking-you-to-the-northside 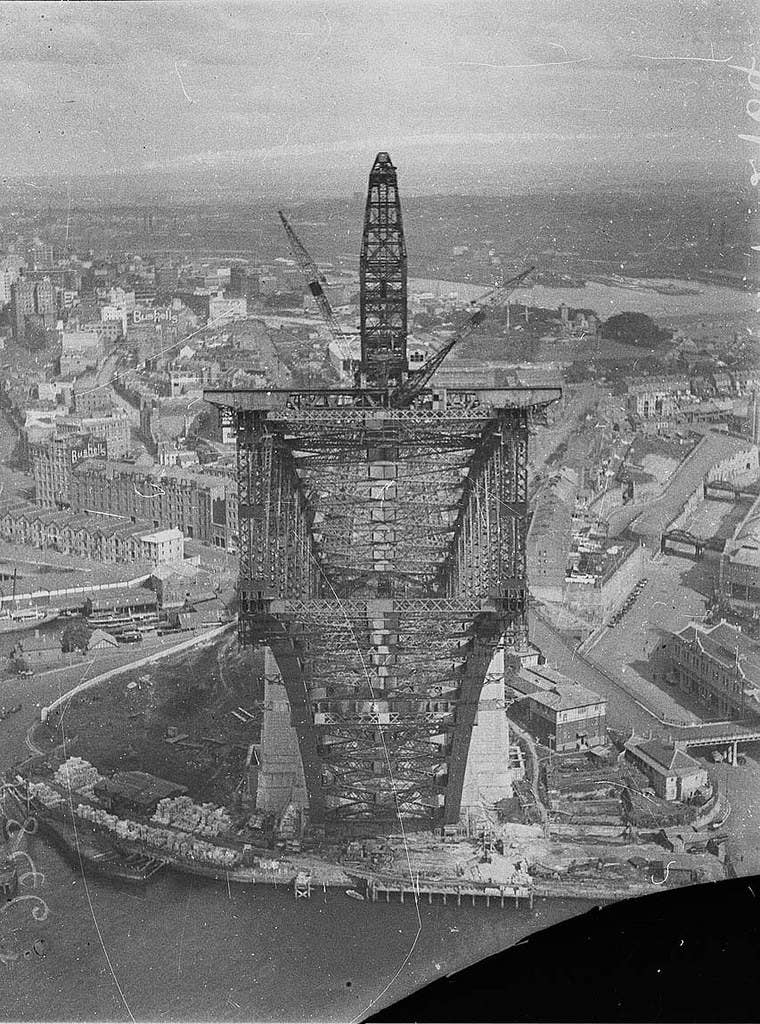 The story of the first successful crossing of Australia from Adelaide to The Top End. Poor Stuart. Died a broken drunk.

A largely forgotten attack on Broome. I visited Broome in 1998, there is a memorial to the strafing there consisting of an aircraft engine.

During World War Two, a surprise air raid on the remote Australian town of Broome killed scores of people.

But even in Australia it is not widely remembered, historians say.

Dave Jackson is among those hoping to raise awareness - he's dived to film remnants of the attack.

These included an airborne United States Army Air Forces (USAAF) B-24A Liberator full of wounded personnel—nearly 20 died when it crashed in the sea, about 16 km (8.6 nmi; 9.9 mi) off Broome.[4] The Allies also lost 15 flying boats at anchorage; many Dutch refugees were on board and the exact number and identities of all those killed is unknown but the ages and names of some were recorded when they were moved from Broome to the Perth War Cemetery at Karrakatta in 1950 (the known casualties include nine children, aged from one year old). At the airfield, the Japanese fighters destroyed two USAAF B-17E Flying Fortresses, a USAAF B-24, two RAAF Lockheed Hudsons, and a Royal Netherlands East Indies Air Force (ML-KNIL) Lockheed Lodestar.

A KLM Douglas DC-3 airliner—PK-AFV (carrying refugees from Bandung)—was pursued and attacked by three Zeroes 80 km (50 mi) north of Broome. The aircraft managed to limp on to perform a successful landing on a beach near Broome, but was then strafed, causing the loss of four lives and the theft of diamonds worth £150,000 – 300,000 (now approximately A$20–40 million).

There were no Allied fighter planes based in Broome at the time. The Zeroes encountered some light arms fire from the ground. One Zero pilot—Warrant Officer Osamu Kudō—was killed by ground fire from a Dutch ML-KNIL pilot, First Lieutenant Gus Winckel, using a 7.9-millimetre (0.31 in) machine gun he had removed from his Lodestar. Winckel balanced the weapon on his shoulder and sustained burns to his left forearm when it touched the barrel of the gun after firing.