There is only the eternal 'now'.

Judging by past exhibitions I'm not confident this will be cutting edge research - but I'll let you know. 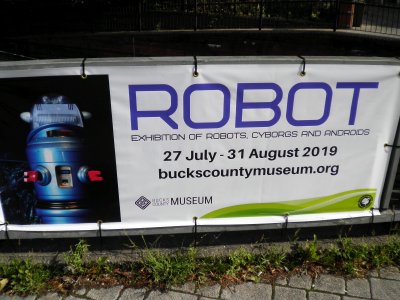 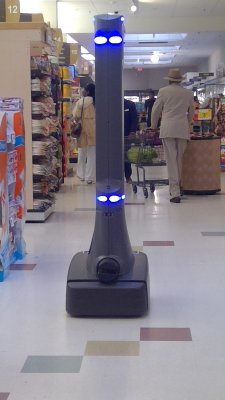 Stop and Shop, a prominent supermarket chain in my area, has installed a Marty in each of their stores. Someone must have thought they looked scary, because each Marty has a huge pair of googly eyes on one side. (They wouldn't fit on the front.) 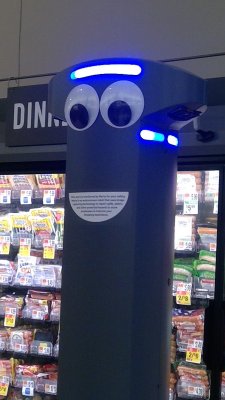 Underneath these eyes is a sign in the shape of a smile that explains Marty's job: roaming the store looking for spills and other hazards, and reporting them to employees. When he spots a problem, he stops and reports it. Usually his blue lights turn yellow and a female voice cautions passersby – in English and Spanish – of the potential danger. He also seems to be associated with announcements over the store PA system of "cleanup needed in [aisle number or department]."

While I don't know how well these robots are working out generally, I have seen numerous false alarms on every shopping trip: Marty will stare at basically nothing and go into hazard mode in front of an empty stretch of floor. Perhaps overly polished sections look wet? A store employee usually walks up to Marty and overrides the alert.

On a recent brief visit to one store, I was surprised to see Marty seemingly ignore several potential hazards: a sprig of parsley, a grape, a smallish Mylar balloon on a stick, and – most troubling – a slightly crushed bottle of a gelatinous lotion or sanitizer. I thought that someone had decreased his sensitivity, or that he was learning to ignore the little things – until I saw that he was sending out false alarms as much as ever.

Not exactly 'Tobor the Great' is he ?

The recent highly-publicized deployment of Russia's "Fedor" to the ISS didn't go well. Fedor has returned to earth and will be retired.

It's mission over for a robot called Fedor that Russia blasted to the International Space Station, the developers said Wednesday, admitting he could not replace astronauts on space walks.

"He won't fly there any more. There's nothing more for him to do there, he's completed his mission," Yevgeny Dudorov, executive director of robot developers Androidnaya Tekhnika, told RIA Novosti news agency.

But Fedor turned out to have a design that does not work well in space -- standing 180 centimetres (six feet) tall, its long legs were not needed on space walks, Dudorov said.

The Russian space agency said the legs were immobilised during the trip and Fedor was not programmed to grab space station hand rails to move about in microgravity.

Dudorov said developers were sketching out plans for a replacement "that must suit the demands of working on the outside of the ship". ...
Click to expand...

This is at once massively impressive yet slightly worrying.

Or is it just CGI as someone else pointed out before, I don't recall actually ever seeing one with my own eyes.

Yithian said:
This is at once massively impressive yet slightly worrying.

This is worrying .. we need John Connor to be born ..

The rest of the article is behind a paywall/or sign for a free month.

British workers are deliberately sabotaging robots amid fears they will take their jobs, study finds.

Science fiction films often depict the fear that one day, robots will seize power over humanity. Now machines have started appearing in workplaces in Britain, it appears humans have started the fightback.

A new study by De Montfort University in Leicester has found that workers are deliberately sabotaging and assaulting the robots they work alongside every day amid fears that they will take over their jobs.
Click to expand...

This incident highlights the fact that people seem to attribute too much functionality / utility to robots. These overly optimistic observers seem to include both the folks who deploy robots and those who seek to interact with and / or utilize them.

Those Knightscope security robots may not be so great at their jobs.

When a woman in a park near Los Angeles saw people fighting and tried to summon help via a police robot patrolling nearby, the robot merely told her to "step out of the way" and continued along its pre-determined route, according to NBC News.

No help came until the spectators called 911 directly, raising the question of what, if any, function these robots are actually supposed to serve.

It turns out that the robot, a K5 model named "HP RoboCop", patrols the park on behalf of the police department - but doesn't have any way of summoning human officers to the scene, Huntingdon Park police chief Cosme Lozano told NBC.

Instead, he said, calls go to Knightscope - and will continue to do so until the police department develops protocols for handling calls made through the police bot. It's surprising news, given that the robot has been patrolling the park since June.

The fact that people assume the robot, which has the word "police" emblazoned on it in large letters, can connect them to the police department reveals just how nebulous these robots are. Especially when they pop up without any sort of public education to go alongside them. ...
Click to expand...

The latest robot from Bosstown Dynamics...

Interesting, a little unsettling, but interesting (from The Japan Times):
Highly intelligent, self-aware and helpful around the house — the robots of the future could look and act just like humans and even become their friends, says wild-haired roboticist Hiroshi Ishiguro.

They could combat the loneliness epidemic, like in that film Marjorie Prime (though the companion there was a hologram). Bit more expensive to buy than a hamster, mind you.

I can't see the picture above, But does it show Erica ?

GNC said:
They could combat the loneliness epidemic, like in that film Marjorie Prime (though the companion there was a hologram). Bit more expensive to buy than a hamster, mind you.
Click to expand...

I do believe we had an 'interesting' thread on this subject some time ago.

Maybe someone can resurrect it and we can kick it around again.

I admit I didn't catch-on to the fact this was CGI until the final scene. The scary thing is, Boston Dynamics is probably only a couple of years away from developing such a robot for real.

This interview has the 'feel' of one Human interviewing another - Here the famous Sophia at her best:

"
Sex robots that "breath" using a robotic chest cavity will be unleashed onto the AI girlfriend market.
Cloud Climax, UK agent for AI-AITech, told Daily Star Online it is making game-changing leaps in the technology of its flagship Emma model.

It is aiming to make the robot move its arms and legs so it can walk.
But in a further human-like breakthrough, it wants to equip the sex robot with the ability to breathe..........."


When do you think you'll see the first lawsuit where someone sues the manufacturer because the robot got too frisky and he or she was injured by it?

AlienView said:
This interview has the 'feel' of one Human interviewing another - Here the famous Sophia at her best:

So fear the robot!

Mythopoeika said:
So fear the robot!
Click to expand...

Why fear the future - It is inevitable!

The robot {advanced AI life form} is the result of an Evolution {you do believe in Evolution?} that is a relentless and ruthless as any creator may have programmed it to be - It will not stop.

And all the Atheists, Creationists, and whatever will not stop it - The strong and intelligent will survive and conquer - you can not turn the clock back.

No, don't fear the robot - Love the robot as if it is your own progeny, your 'wayward son'** about to be born.


** From urbandictionary.com, top definition:
wayward son -
"Any individual who thinks for themselves, and laughs in the face of authority. Someone who goes against the grain in several aspects of their life, and is publically chastised for doing so. A person who refuses to bend to the conventions of society. A natural born leader. Unconventional in their wisdom, and accutely aware of their surroundings at all times. Often alienated for being so. "


So as you still may question if and when an AI program or entity can think
- think about this - When and if that thinking starts, it will continue - Until it is
the dominant life-form!
Last edited: Nov 1, 2019

AlienView said:
Why fear the future - It is inevitable!
Click to expand...

It was just a bad pun.

In the long running sci-fi series Stargate SG-1 they had what I believe were called
replicants, smaller versions of those cheetahs, that were able to reproduce - Almost like rapidly breeding insects - And they then overran everything in their path. It was a nightmare to stop them - Watching that video makes me think that
that scenario may not be too far in the future.

AI confronts Man with the most promising and yet dangerous future
- Out of control AI is already far more than a good science fiction story.

AlienView said:
So as you still may question if and when an AI program or entity can think
- think about this - When and if that thinking starts, it will continue - Until it is
the dominant life-form!
Click to expand...

In the end, AI is no different to us.

It is just much faster. It is presented with the same 'if-then-else' decisions we make every day.

It will just come to more logical conclusions that may even be the correct ones, but not ones we would have made

It will not know morality..

What happens when our computers get smarter than we are? | Nick Bostrom
Just watched this 'Ted Talks' video with Nick Bostrom [ "In 2009 and 2015, he was included in Foreign Policy's Top 100 Global Thinkers list"]


We are already at the point where it is more than science fiction to postulate a scenario where androids {AI as Humanoids} may sit in judgement of the biological
entitys {Humans} that created them and decide whether inefficient biological life
forms are worth sustaining ?????

In Virginia, USA they have been for a while using an AI algorithm to determine sentence times for prisoners, based on calculating how likely they are to re-offend.
It seems it's not giving the answers people want.

I have said this a long time back, I am still on the side of the Robots.

Xanatic* said:
In Virginia, USA they have been for a while using an AI algorithm to determine sentence times for prisoners...
Click to expand...

Coincidentally, was reading this only the other day...