OK so it's from Yahoo news so it's probably a load of crap but...

Special Paris rollerblade police unit participate in a training session November 4, 2003. One of their colleagues plays the role of a criminal as the three others practice taking a felon into custody and the difficult task of transporting him to the police station while wearing their rollerblades.

But it's the picture I love: 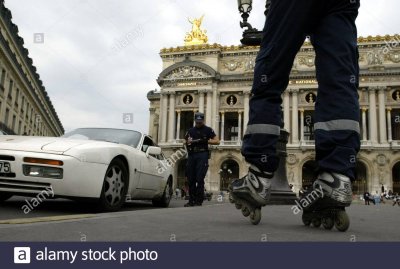 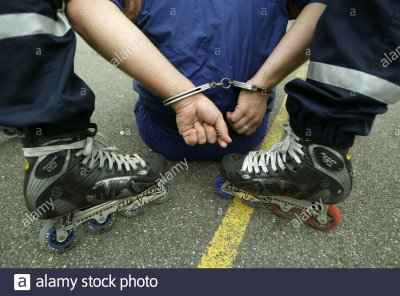 Look, if the met can have coppers on mountain bikes to police the royal parks, the French can have rollerblades. After all, if a pushbike-riding copper had to escort someone on handcuffs it'd look like he was taking the perp for walkies!

If a copper on skates was to arrest a criminal on skates, the ensuing struggle would be `kin hilarious!

Seriously, though, I think they (like the UK cops) are trained to tackle and restrain a criminal while wearing blades and calling in more traditional support on the radio.
A

Stormkhan said:
If a copper on skates was to arrest a criminal on skates, the ensuing struggle would be `kin hilarious!
Click to expand...

arse over tits (as the old phrase goes )

Pakistan police pop their rollerblades on to catch Karachi's criminals

Police in Pakistan’s largest city, Karachi, are deploying an armed rollerblading unit to curb theft and harassment on its teeming streets. ...

“We felt we needed to come up with an innovative approach to control street crime,” said Farrukh Ali, chief of the unit, explaining that officers on rollerblades could more easily chase thieves on motorcycles through the city of 20 million.

Ali conceded that rollerblading police could not be deployed across many parts of Karachi due to the poor road conditions and uneven footpaths, but said they would be sent to public places with a higher incidence of theft and harassment.

“This is just the beginning,” said Aneela Aslam, a policewoman on the unit. “ ... With this training, we can reach narrow alleys very quickly where it is usually difficult to go.”

Safety concerns were raised when initial footage of the Karachi unit’s training showed officers carrying heavier weapons, but Ali said the unit would only carry handguns, reducing the risk of bullets richocheting.

The rollerblading police - who follow in the footsteps of similar units in Europe and elsewhere - are expected to begin officially next month ...

And they have already begun patrolling Karachi’s bustling beachfront.
Click to expand...

Found some footage of the French blading cops, looks like the blades are detatchable so bringing the perp in wont be an issue

Seems the police in the Netherlands are at it too