Summit Middle School in Frisco, Colo., is a tobacco-free campus. Students who smoke cigarettes are suspended.

But when a lunchtime crew of sixth-graders last fall started "smoking" Smarties, the tart, chalky candy discs wrapped in cellophane, lunchroom monitors and the school nurse were flummoxed.

The children didn't light the candy. They crushed it into a fine powder in its wrapper, tore off one end, poured the powder into their mouths and blew out fine Smarties dust, mimicking a smoker's exhale.

"It was freaky," says Corinne McGrew, a nurse for Summit School District. "My biggest concern was that they would aspirate the wrapper or a whole Smarties and it would be a choking hazard."

The fad at Summit Middle School died down after a few days and some harsh words from the lunchroom staff. But at other schools and across the Internet, "smoking Smarties," as the activity has been labeled, is gaining popularity. Some children have even taken to snorting it, all to the horror of parents, teachers and the 60-year-old company that manufactures the candy.

Jeremy Froncek, 18, says smoking Smarties is a 'cultural phenomenon' and he likes it because 'it looks like you're smoking something but you're not.'

Through the years, other candies have endured misuse, such as a craze that began by mixing Mentos with Diet Coke to cause a frothy eruption. But few have involved such obvious mimicry of lethal adult vices.

The phenomenon of smoking Smarties -- a candy that has been around for six decades and is different from the candy-coated chocolates of the same name popular in the U.K. -- has led to dozens of how-to videos on video- sharing Web sites.

Some of the children attempting the feat are caught on camera hacking in a spew reminiscent of a smoker's cough. Others have perfected the art of blowing Smarties smoke rings; some can even exhale through their nose. Children don't inhale the powder or try to get it into their lungs; they pour it into their mouths and exhale quickly, causing a cloud of fine dust to emerge.

"You can take 'em and you can bang 'em on something hard, like real hard," says 14-year-old Titus Williams in his step-by-step YouTube video, where he demonstrates smacking a roll of candy on his red Webster's New World Student's Dictionary.

Titus, an eighth-grader from Greenwood, S.C., decided to show an online audience his prowess at smoking candy while bored one night. In the video, which he says is "more instructional" than others, Titus sucks the powder from the wrapper, then exhales a cloud of smoke through his mouth -- and through his nose.

"It's kind of like eating the candy, but a different way to eat the candy," said Titus, who is emphatic that he will never smoke cigarettes. Although his video is titled "How to Smoke Smarties," Titus tells his online audience he is demonstrating with Sassy Sours, a similar product made by Copper Kettle Candy Inc. in Bloomington, Calif. The company says it hasn't received complaints from parents.

Titus's father, Melvin Williams, says he was initially concerned that the video might glorify smoking or evoke drug use. But after calling a family meeting to discuss the video, Mr. Williams decided Titus was merely being a kid. "I just thought it was funny," he says.

Last month, Mark Shikowitz, an ear, nose and throat doctor at Schneider Children's Hospital in New Hyde Park, N.Y., treated a boy about 9 years old who complained his nose was burning because of a Smarties incident. (His parents brought in a Smarties wrapper but weren't sure how he'd ingested them.) Dr. Shikowitz determined that part of a Smarties must have lodged in the boy's nose until it dissolved. The child wasn't harmed.

Dr. Shikowitz says Smarties may cause irritation to throats and noses -- and even lungs if inhaled -- but are not likely life-threatening because they eventually will dissolve. "I still don't think it's a great idea," he says.

Oren Friedman, a Mayo Clinic nose specialist, cautioned that frequent use could lead to infections or even worse, albeit rare, conditions, such as maggots that feed on sugary dust wedged inside the nose.

School officials aren't amused. "It has come to our attention that some of our students are involved in something that is known as 'smoking Smarties,'" principal Phyllis Faust said in an email sent last year to parents of Hewitt-Trussville Middle School in Trussville, Ala. It called the practice "hazardous to your son or daughter's health."

"I have made it clear to our students that possession of Smarties (or similar candy) will result in a Class II offense," which usually means detention, the note said.

Jody Puryear, whose son Grant attends the school, says smoking Smarties could be a gateway leading "to smoking cigarettes or pot or anything else like that."

For some teens who have tried smoking Smarties, comparisons to cigarettes or drugs are part of the point.
'Freak Your Mom Out'

"To freak your mom out, sit behind a chair and just blow smoke up in the air with your mom in the room" says YouTube user "SOAD9787" in a smoking-Smarties video he posted Saturday.

He remembers as a child puffing on candy cigarettes that blew out fake smoke -- a practice that he thinks may have led to years of smoking the real thing. Mr. Ostrow quit smoking in 1994, and Ce De Candy banned smoking at its factory in the early 1980s, long before ostracizing smokers became mainstream, he points out.
Singling Out Smarties

He wonders why Smarties are being singled out. "It could be done with anything made with sugar and compressed -- Necco Wafers, Conversation Hearts, SweeTarts. Lik-M-Aid is already pulverized and so is Pixy Stix," he says, referring to products made by other companies. "I don't want to be complimented that we're the No. 1 choice."

While Mr. Ostrow says the fad hasn't been a boon for Smarties sales, it sent 18-year-old Jeremy Froncek on a recent hunt across Suisun City, Calif., for a roll of the candy.

"One supermarket told us they didn't sell them except during Halloween," he says. "All they had at the candy store in the mall were giant Smarties, and they were really big."

Mr. Froncek calls smoking Smarties a "cultural phenomenon" and says he likes it because "it looks like you're smoking something but you're not."

While he's working on a perfect exhale, he won't try blowing the powder out his nose. "That's pretty hard core," he says. "That's like going to a whole other level."
Click to expand...

When I was a kid and the weather was cold enough to see your breath in front of your face, we used to pretend the vapour was cigarette smoke, with accompanying mime. I've never smoked a day in my life.

Wait, hold on there, maestro, they have Smarties in the U.K.?

I was thinking that, but the other way round. Here is a link to UK Smarties. Do you have a link to U.S. Smarties?

I liked the part especially about the maggots feeding on the sugary dust inside of the nose.

Reading what the kids had to say, I get the feeling they are far more intelligent than those adults.
I mean is this for real?
Having to use the 'maggot' scare tactic is truly low.

The more something is being demonised, the more kids will copy it, otherwise it wouldn't be 'funny'. If they take up smoking in their later lives, it won't be due to the smarty craze but to peer pressure or a million other reasons.
I used to 'smoke' sweets cigarettes and my mum was a chain smoker and I didn't even try until I was 16. The reason I bought my first packet was neither my mum nor the sweets but a Dunhill poster on my wall.
However I have never been addicted and haven't bought any cigarettes in years as I only smoke socially.

What they are doing is overreact. Embarrassingly overreact. Maybe they should ban twigs because we used to pretend smoking with them too. :grrr:

Spudrick68 said:
I was thinking that, but the other way round. Here is a link to UK Smarties. Do you have a link to U.S. Smarties?

US smarties are chalkier, not a smooth surface like UK smarties. 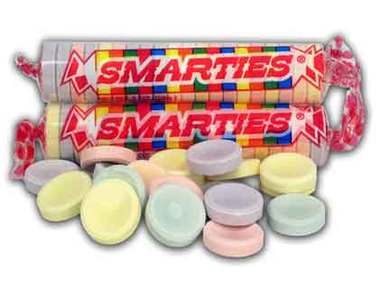 When I was at school, my mates used to crush up Refreshers and snort them. Obviously, this didn't catch on!
R