Wildlife officials say the drought has severely affected wild animals in the region.

So when the team of rescue workers found the 12' long cobra, the first thing they did was to offer it water.

The 'thirsty' cobra can be seen gulping down water from the bottle.
The snake was later taken to an animal care facility.
Click to expand...

SIOUX FALLS, S.D. (AP) — A man who was fined for allowing his pet snake to slither freely in a South Dakota park said an animal control officer suggested he use a leash to restrain the reptile.

Jerry Kimball said he initially thought the recommendation was a joke because it was April Fool's Day when he was fined $190 and ticketed last week for "animals running at large," told the Argus Leader (http://argusne.ws/2oMstxK ).

"He was literally asking me to put a rope around my snake," Kimball said. "I was like, 'Dude, no.' I was dumbfounded."

Kimball was approached by the officer after a woman complained that his Fire Bee Ball Python was roaming freely at Falls Park in Sioux Falls. ...

How the hell did it move so fast? 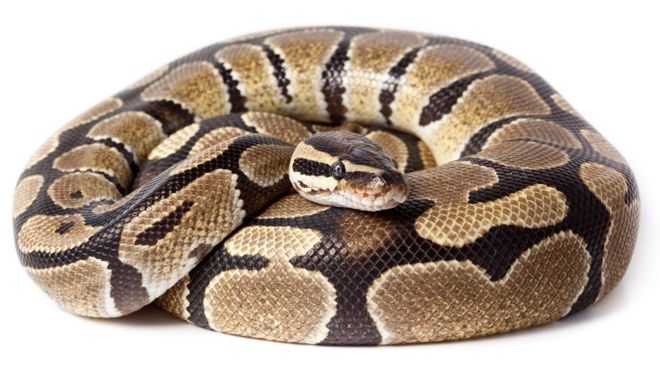 Image copyrightGETTY IMAGES
Police have appealed for help in tracing a snake which has gone missing in Aberdeen.

Officers said it went missing from the Crown Street area of the city.

They said the reptile was not a danger to the public but anyone with information about its whereabouts should contact Police Scotland on 101.

He'll have been eaten by Haggis.

Better out than in ..

Imagine opening a tube of Pringles and a snake pops out...

A California man was arrested after a package addressed to him was found with three live king cobras hidden inside potato chip cans, US officials said.

Rodrigo Franco, 34, was arrested in Los Angeles and charged with illegally importing merchandise.

Customs officials discovered the snakes, about two-feet long, while inspecting a package that was mailed to Mr Fanco from Hong Kong in March.

Federal agents seized the snakes for safety purposes but the turtles were delivered to Mr Franco at his home in Monterey Park, California.

The agents served Mr Franco with a search warrant and found inside a children's bedroom at his home tanks containing a live baby Morelet's crocodile, alligator snapping turtles, a common snapping turtle and five diamond back terrapins, all of which are protected under US law, prosecutors said. ...

A university in north-west Nigeria is hiring snake charmers to eradicate the danger of fatal snake bites on campus.

The dean of student affairs, Dr Suleiman Kankara, said charmers had been hired before after snake reports.

Snake charming is commonly practiced in south Asian countries but also in parts of Africa.

That's a beauty. Looks a bit dead though.

hunck said:
That's a beauty. Looks a bit dead though.
Click to expand...

But what about the snake?

GNC said:
But what about the snake?
Click to expand...

Yeah I was mad that they killed it - it’s not venomous.

IamSundog said:
Yeah I was mad that they killed it - it’s not venomous.
Click to expand...

What kind is it? At first I thought copperhead, but they're venomous, and anyway it's too big. At least, I'd hate to see a copperhead that big!

I believe it is a Great Plains Ratsnake, pantherophis emoryi.

The rats are probably celebrating.

I wonder how many of them are down there, swimming through sewers?

A snake found writhing in a sewer system could have been flushed down the toilet, animal welfare experts think.

The Carolina corn snake was discovered in a sewage chamber at a water treatment works in Gwynedd.

The 4ft (1.2m) long reptile was uncovered when workers at the Llanllyfni plant, near Caernarfon, were carrying out maintenance work.

RSPCA Cymru said the recovering snake was "another timely reminder" of the challenges of caring for exotic pets.

"We took the cover off the manhole and saw this 'pink thing'," said Welsh Water maintenance engineer, Keith Bridge.

ramonmercado said:
I wonder how many of them are down there, swimming through sewers?
Click to expand...

If I were Joe Average Texan enjoying a few minutes' respite on the throne, and I saw in the receptacle below me something like that creature in the photo above, my response would not be a calm, measured, "Hmmm... Vertical pupils or round? Markings suggestive of...?"; it would be a World Championship-level penguin-style high jump, followed by emptying my Peacemaker down the thunderbox. And I'm not in the least afraid of snakes.

ramonmercado said:
I wonder how many of them are down there, swimming through sewers?

A snake found writhing in a sewer system could have been flushed down the toilet, animal welfare experts think.

The Carolina corn snake was discovered in a sewage chamber at a water treatment works in Gwynedd.

The 4ft (1.2m) long reptile was uncovered when workers at the Llanllyfni plant, near Caernarfon, were carrying out maintenance work.

RSPCA Cymru said the recovering snake was "another timely reminder" of the challenges of caring for exotic pets.

"We took the cover off the manhole and saw this 'pink thing'," said Welsh Water maintenance engineer, Keith Bridge.

Probably not very many as they would soon die of cold/ be killed by rats anyway. Poor snake.

Probably not very many as they would soon die of cold/ be killed by rats anyway. Poor snake.
Click to expand...

Considering its environment, I think that death by hypothermia or rat-o-phagia might be considered a blessed release. 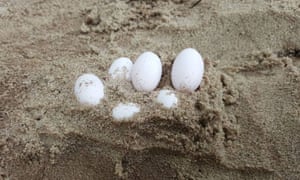 It’s a mystery as hard to grab hold of as the slippery serpents supposedly at its centre: were the 43 unidentified eggs found in a sandpit at a school on the New South Wales mid-north coast snakes, or something less sinister?

Snake social media went into meltdown on Tuesday when reports emerged that wildlife rescuers had been called in to remove a dozen mystery eggs from a sandpit at a school near the coastal town of Laurieton, 350km north of Sydney.
etc
Click to expand...

'Believed to be'...gawd, they'll write any old drivel, won't they.

Yep, could be or maybe not be snakes or water dragons or something else...er maybe. 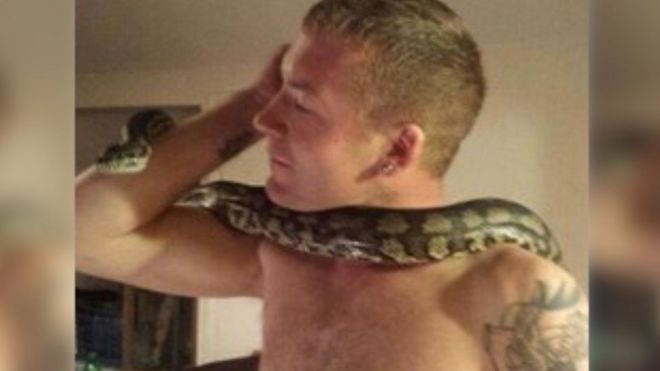 Image copyrightJUSTGIVING
Image captionDaniel Brandon's social media pages showed him posing with snakes, including a python
A snake owner was killed by his pet python, an inquest has heard.

Daniel Brandon, 31, died from asphyxiation at his home near Basingstoke, Hampshire, on 25 August.

One of the pets he kept at home - a female 8ft (2.4m) African rock python named Tiny - was found near his body, out of its pen.

Coroner Andrew Bradley said there was no doubt Mr Brandon died "as a result of contact with Tiny" and he recorded a verdict of misadventure.

The inquest at North Hampshire Coroner's Court heard Mr Brandon had kept snakes for 16 years and the python was "his baby".

His mother Babs told the hearing he kept 10 snakes and 12 tarantulas in his room at the family home.

She said he had owned Tiny since it was small enough to fit in his hand.

Her son never felt threatened by Tiny and was aware of how strong it was, she said, but there were occasions when it would "strike out" if she entered the room.

She said she discovered Mr Brandon unconscious in his bedroom on the night of his death and later found the snake coiled under a cabinet.

"She was coiling around him, at which point I have no idea. There was a point at which either she takes hold of him unexpectedly or trips him up or some other mechanism."

Did she asphyxiate him or trip him? Strange that they don't seem to know.

'Praise the lord and pass the rattlesnakes': the pastor killed by the viper he preached with
Mack Wolford coiled venomous snakes round the arms and necks of his congregation. One, called Old Yeller, killed him. Photographer Lauren Pond relives how she captured the tragedy 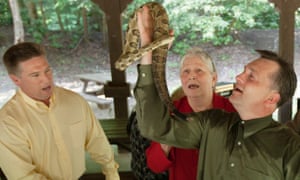 Pastor Mack Wolford had many ways of getting the faithful all fired up. He would drive from town to town, preaching, singing, speaking in tongues and brandishing – on several occasions – venomous snakes. Wolford, who lived in McDowell County in West Virginia, belonged to the Full Gospel Apostolic House of the Lord Jesus, one of the few remaining small Appalachian Pentecostal sects known as “sign followers”.

They adhere to a literal interpretation of a passage from the Gospel of Mark in the King James Bible. “And these signs,” it says, “shall follow them that believe; In my name shall they cast out devils; they shall speak with new tongues; They shall take up serpents; and if they drink any deadly thing, it shall not hurt them; they shall lay hands on the sick, and they shall recover.”

Nobody saw that coming.

You know the story - go out with a bunch of friends for a bit of wine tasting on a warm Sunday, neck a few too many glasses over lunch and next thing you remember is you're all alone playing at Houdini atop some stone wall next to the winery restaurant and everyone's got their phones out. We've all been there.