Today, so far, I don't think I have learned anything new. Which is disappointing - given what I was promised as a child.

Did anyone else learn something new today?
M

I bet you didn't know that a Saudi Arabian woman can get a divorce if her husband doesn't give her coffee. :eek!!!!:

I learned that one should wear some form of eye protection when pruning above one's head.
S

Oh, and I learned today that I just physically cannot move a pan of boiling water from stove to sink with my bare hands fast enough to avoid being burnt. Indeed, my perception of how fast I can move and how long it takes to be painfully burned are sorely at odds with the reality of the situation. None the less, next time I'm in a hurry and can't find oven gloves, I will no doubt try it again. So actually, today I learned nothing.

Never drink out of a can or a bottle which you haven't SEEN opened.


(Once saw someone sneak a liberal swig of someone else's beer- only it wasn't beer. That taught HIM.)
D

I learned today that I don't know a lot.

Took part in a quiz for Comic Relief and failed miserably.
A

Spooky's not going to mention how she found that one out... :blush:
Click to expand...

I learned that some guy named Koon invented nurbs.

escargot said:
Never drink out of a can or a bottle which you haven't SEEN opened.
Click to expand...

Never drink out of a bottle without checking it for labels first. (Have I mentioned the guy who took a swig of acetone during a Chemistry class because he thought it was distilled water?)
S

escargot said:
(Once saw someone sneak a liberal swig of someone else's beer- only it wasn't beer. That taught HIM.)
Click to expand...

what was it?
C

What the hell are nurbs?

Now then, Piscez, if you tell me, I will have learnt something new today . . .

Obvious things I learnd the hard way.Never tell the guy cutting your hair hes an asshole,never ever go in to a chinese take away drunk and order in a stupid chinese voice.Man I sufferd for that one.Two bog rolls worth of suffering.Fall asleap on the last bus home.Tell customs at edinburgh airport to hurry up.Three hours for that one.Try for a bit nooky with your woman when you role home after an all day sesh.The gift of a single fish will not melt her heart.(are woman funny or what?)
B

It's true, every day I learn something new....trouble is, by the next day I've forgotten it!
A

The Hon Walter Rothschild had a team of harnessed zebras.

The caption to this photo reads: "Mr Rothschild was practically the first Englishman to break in zebras to harness. At one time these animals were thought to be quite untamable"

Turns out (Google) that this is a quite famous photograph and story. I found it in volume 1 of "The Living Animals of The World".

Pembroke College, Oxford, has an officer called the Lord High Chief of the Bollocks whose job is to shout 'Bollocks!' very loudly when Junior Common Room speakers diverge too far from the point.

Corpus Christi College, Oxford, has a Tortoise.
He dresses as a tortoise for the annual inter-college tortoise race and has to eat a whole lettuce without using his hands before the race.
Last year he obstructed the path of another (real tortoise) entrant and was disqualified.

Trinity College has a Duck Welfare Representative who keeps an eye on the college's three ducks.

(Once saw someone sneak a liberal swig of someone else's beer- only it wasn't beer. That taught HIM.)
Click to expand...

It was piss, man, oh Lordy, it was piss.
He hadn't SEEN it opened, you see, and didn't know it was PISS.

Something I learned over the weekend:

Never impersonate a Vorlon in the living room.
You don't want to know.

Also, if you don't get enough sleep, expose yourself to high stress levels, and rush about trying to do too many things at once, you get cranky.
H

Recently I learned that Van Gogh used to eat paint and the famous Victorian fairy painter Richard Dadd cut up his dear old dad with a cutthroat razor into one inch cubes. Oh yes, and Eric Gill, sculptor and font designer, was a real deviant. It's funny how I only remember the real sordid details of artist's lives.
A

I think he was without his trousers on numerous occasions, with his dog, allegedly. Best not to go into detail. :eek!!!!:
A

All that lovely, cadmium yellow, yum!

A new thread with the function of spreading those little snippets of eye-opening knowledge that we bump into as we live and learn.

To start the ball rolling.

The etymology of many English words is fairly easy to discern and the meaning can often be deconstructed syllable by syllable, but in some cases it's obfuscated a little.

The English word helicopter comes to us via the French from Greek, but the two units that compose it are not HELI + COPTER, as I'd always supposed, but HELICO + PTER, which originate from the helix (ἕλιξ) "helix, spiral, whirl, convolution" and pteron (πτερόν) "wing", as in pterodactyl.
Last edited: Mar 7, 2018

Richard 1 acceded to the throne of England on 6th July 1189. In 1275 the first Statute of Winchester declared that the time of memory was limited to the beginning of Richard’s reign.

The ampersand - & - was a letter in its own right until being relegated to symbol status. The English alphabet has, at times, had as many as 28 (some say 30) letters in it. Some are discontinued but still occasionally apparent, such as Thorn (the "Y" in Ye Olde, actually a hard "th" ), others only in old script. The modern letters U and J only came into common use in the 16th Century, and the modern lower case S (as opposed to the long "f" style) not until the mid 19th Century.

Location
At the Cross Road

The medals for the Paralympic Games all rattle when shaken so that the visually impaired know which type they are holding. The bronze has the highest pitch, then the silver and lowest is the gold.

The difficulty of getting pandas to breed in captivity is primarily due to their being in captivity--they are proper sex-beasts in the wild.


It was the legendary zoologist George Schaller who made some of the first observations of real, wild panda sex. In 1981, he'd been tracking a female called Zhen-Zhen, as were two male pandas – one large, one small. "The small male comes near, moaning, and is promptly attacked again, though I only hear growls, roars, and whines like a pack of dogs fighting and see the bamboo shake violently," he wrote in The Giant Pandas of Wolong.

And finally--and this shocked me, being a bear of little brain--baby carrots are A LIE. 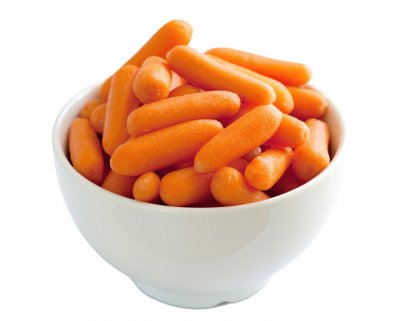 These things--from the supermarket: Just mis-shapen and imperfect carrots cut down to miniature size, not an actual distinct variety of dwarf carrot.