I got goosebumps when the Borg musical motif started playing at the end of the episode.

I guess there's one episode left to go, though it seemed like they were wrapping it up neatly with Ep.9. Got sick of mini-Picard crying "Maman!", in fact the whole psychological backstory is completely unnecessary. I'd love to see a modern movie where the hero or heroine didn't get some past trauma to get over, and just had a boring life so wanted adventure instead.

For the first 40 years of “Star Trek” history, the character of Christopher Pike was little more than a footnote in the franchise’s lore. Captain of the Enterprise in the failed original NBC series pilot “The Cage,” Pike, as played by Jeffrey Hunter, wound up as the dry run for William Shatner’s James T. Kirk, a square-jawed hero doing square-jawed hero stuff who fell a few inches short of being right for the job. Gene Roddenberry, ever the environmentalist, recycled scenes from that unaired pilot for a two-part episode of the original series called “The Menagerie,” which allowed for, until 2009, Pike’s greatest contribution to popular culture: his transformation into a hideously scarred burn victim who lived in a large black box that beeped whenever someone asked him a question.

It’s not much build off of, but Pike has become increasingly important to “Trek” as the franchise looks to its past to build a future. Bruce Greenwood played the role J.J. Abrams’ big screen reboot “Star Trek” in 2009, as a mentor figure quickly sidelined for the people who actually mattered, but it wasn’t until Pike became a regular on the second season of “Star Trek: Discovery” that the character came fully into view. Stepping into the vaguely dad-shaped space left by Greenwood in Paramount+’s “Star Trek: Strange New Worlds,” Anson Mount offers up something surprisingly rare on TV these days: a charming, straightforward good guy. His affable presence is maybe not the best reason to produce yet another “Star Trek” prequel series — but it’s not the worst, either.
Click to expand...

Thoroughly enjoyed the finale of Picard.
Shedloads of poignancy, a couple of surprise old faces turning up, and a genuinely epic ending with significant ramifications for future Star Trek stories.

Strange New Worlds hit the spot for me. Had the feel of traditional Trek with modern production values. Fingers crossed

blessmycottonsocks said:
Thoroughly enjoyed the finale of Picard.
Shedloads of poignancy, a couple of surprise old faces turning up, and a genuinely epic ending with significant ramifications for future Star Trek stories.
Click to expand...

Putting his heart and soul into what he takes to be his character's last words here:

Finally got around to the Picard finale, eh, a bit schmaltzy for me (Q crying?!), and the reset button made the whole story verge on the pointless - if Agnes had just explained in the first place then they wouldn't have had to interact with Q at all. Plus they put Allison Pill in some truly awful costumes and makeup, did she piss someone off behind the scenes? But s2 was a lot better than s1, so maybe s3 will be the gem.

Pike's big speech to the alien planet in the Strange New Worlds....


so World War 3 began in 2026 got everything nuked, and left the planet a complete.mess for decades, but only 300 million died?
And related, from Picard...


Rios willingly stays in 2024 and officially has a long and happy life with the woman and her child. 2024 is two years before World War 3's decades of planetwide nuclear devastation according to Pike.
It also means Rios also knew that WW3 would be starting imminanently when he decides to stay.

They've already said S3 will be the last and conclude the arc.

Stormkhan said:
This is why aliens are, basically humans in funny rubber masks**. This is right from ToS.
Click to expand...

I reckon the most alien-looking aliens in any ST series ever, were those weird little creatures that writhe about and die at the end of TOS "Catspaw" episode:

"...the most alien-looking aliens in any ST series ever..."
What about 'tribbles'?
Or that underground rock creature that made them melted tunnels, which looked like a big rug?
Or them things that flew around and landed on the back of peoples necks and controlled them with pain?
Or those 'macrophage' things that flew around in voyager?
Or the thing that was just a kaleidoscope of flashing lights?
Or those ear-bug things from 'Wrath of Khan'?
Or this bloke?

The entire first episode of Strange New Worlds is free to watch on YouTube:

Weird - it still plays for me! Maybe it is region coded somehow... 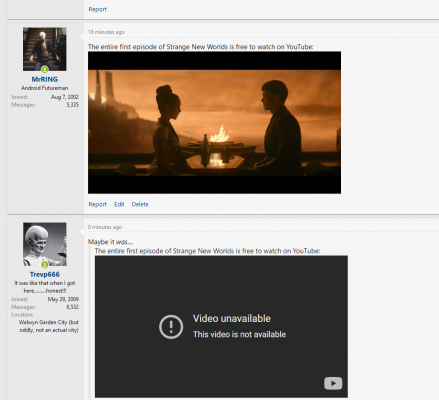 Seems likely. I knew I should've invested in that VPN.

I've been watching Strange New Worlds. After Discovery, it feels good have people do things rather than talk about their feelings.

Xanatic* said:
I've been watching Strange New Worlds. After Discovery, it feels good have people do things rather than talk about their feelings.
Click to expand...

It’s a breath of fresh air, isn’t it.

Where can I watch ST:SNW anyway?

Trevp666 said:
Where can I watch ST:SNW anyway?
Click to expand...

i had to head for the high seas in order to watch it.

Trevp666 said:
Where can I watch ST:SNW anyway?
Click to expand...

Paramount+ launches over here next month (£6.99 PCM or £69 per annum). It'll have the entire Star Trek canon on demand. We're thinking of ditching Netflix and replacing with this*.

*alright then, discussions are ongoing about that.

I just had a scan of this - it seems it won't be available through 'NowTV' or other channels, only purely by subscription to Paramount + as a 'standalone' streaming service, but if you have Sky Cinema you'll have free access.
Way to go - limit your viewers to only those that pay for a single subscription to one channel!
https://www.uswitch.com/tv/news/2022/05/how-to-get-Paramount-Plus-in-the-UK/

Trevp666 said:
Way to go - limit your viewers to only those that pay for a single subscription to one channel!
Click to expand...

I think it's going to be more along the Disney+ model, so loads of content.

Xanatic* said:
After Discovery, it feels good have people do things rather than talk about their feelings.
Click to expand...

Yeah kinda gave up on that for this reason. The whole "load of emotionally iimmature people somehow in charge of 1,000,000 tonnes of planet vapourising death" thing didn't quite work for me.

Looking forward to SNW going back to individual stories, got quite fed up with everything going down lengthy story arc formula.

I've been on Netflix UHD, dropping down to just HD will nearly pay for paramount+.

Or in more recently:

Personally, if I were in the process of trying to calm my inner fears and steel myself for some coming heroics, I'd find it really distracting to have a quivering chick clinging to my thigh.
Click to expand...

I must add one that cropped up today.

Location
Under the highest tree top in Kent

Don't know if this has been seen before (couldn't find it on search) but the Daily Grail just posted this link to Star Trek series one red shirt deaths.
https://laughingsquid.com/star-trek-red-shirt-deaths/

Yes, 'Officer Redshirt' was a rather unlucky chap.
IIRC coming a close second was any character that was a female in a blue shirt that was introduced right near the start of an episode as something like 'our new geology specialist'....they usually met with some kind of unhappy ending too.
You must log in or register to reply here.
Share:
Facebook Twitter Reddit Pinterest Tumblr WhatsApp Email Share Link
Top