Yes, I was millitantly unhappy...I have long felt that SW seems to be moving away from the thing that made it great...

There was precious little in R1 and none in Solo...and this new cartoon, `Resistance` is Force Free too.

But now the Mandalorian, a traditional victim of Forceless philosophy and Jedi genocide, has a green new pal...

(Im not knocking Mandalorians and their culture, they are the most honourable of all groups in the GFFA, but they have never appealed to me.)

Kondoru said:
Yes, I was millitantly unhappy...I have long felt that SW seems to be moving away from the thing that made it great...
Click to expand...
Blue milk.

Mythopoeika said:
Luke was thoroughly sick of it.
Click to expand...
Uncle Owen and Aunt Beru wouldn't let him go to Toshi Station to get some of the green stuff, which is why he fucked off to that water planet in later life.

Adam The Woo at another Disneyland Star Wars event ..

Colin Furze builds a landspeeder. Obviously. Because he's Colin Furze. (you might want to turn the volume down a bit)

Click to expand...
LOL .. for a change, I watched something to the end and that is spot on ..

John Williams full score for The Rise Of Skywalker .. no spoiler titles this time

there was an extended trailer comprised of behind the scenes clips from the first couple of movies trailing with jumanji 2 today ... was crazy seeing alec guiness deadpanning while the kids fooled around in the cockpit of the falcon ... teen fortean hanger-on afterwards remarked that what little she saw of those early films from this trailer, looked way way better than anything else shes seen from the sequents (admittedly not much)

On tonight at 9 on BBC Four (and iPlayer after that) is a pair of documentaries, one about how Palitoy devised the Star Wars toys in the UK, and the other a repeat of the one about UK involvement in the creative side of making the first movie, which is really interesting.

Should whet the appetites of us original fans for this Thursday's latest instalment.

Much as I expected, too much to juggle and tie up in one film:

GNC said:
Should we let Shakespeare die? Let the Bible die?
Click to expand...
Yes to both.

I'll be seeing it tonight, I'll keep you all filled in

Got tickets for Saturday afternoon - hope this bloody cough has cleared-up by then, I'll get kicked-out for my Chewie impersonation at the moment.

James_H said:
I'll be seeing it tonight, I'll keep you all filled in
Click to expand...
I loved it - I think the movie magic took over and I didn't notice all the bad writing people have been complaining about. It was packed - even at the long running time it felt rushed because they were trying to fit so much in. It recaptured a bit of that flash Gordon, adventure feel of the original SW. Rose was barely in it which should please the toxic fans.

Conversely my Star wars obsessive friend who I went with literally left in years because she was so disappointed.

maximus otter said:
The Star Wars franchise morphed from being Sixties “silver wellies” SF, with numbingly clunky dialogue but a few excellent special effects, to ponderously portentous PC pish. With lots of excellent special effects.
Click to expand...
I know I'll regret asking, but how is it PC? Because it has women and non-white people doing things in it?

24 hours on and a mere 30 minutes of The Mandalorian erases the utter shitshow of The Rise of Skywalker.

What the new films could have been if they had not been focus grouped and box ticked to within an inch of their lives.

Episodes 4-6, Rogue One, The Mandalorian and Rebels are my canon. Maybe just Solo,
if you ignore the SJW robot. The rest is just bad fan fiction.

Location
In a Liminal Zone

Saw Star Wars: The Rise of Skywalker, this afternoon it's quite fun, it ties up the story reasonably well, but packs in a too much. There was never going to be a way to wrap it all up which could live up to expectations, but this'll do. A few gaping plot holes, but JJ Abrams keeps it moving fast enough that you don't notice unless you think too hard about it.

Star Wars: The Rise Of Skywalker: Starts off nice and dark, the Emperor Palpatine is still alive! Kylo Ren slays multitudes to get his hands on a Sith Wayfinder and thus locate Palpatine. But the dark Monarch reveals that he had shaped Ren to bring him to the Dark Side! Ren then undergoes a temptation: Palpatine will give him a fleet of Star Destroyers if he kills Rey! By the way there is a secret about Rey... Too many bloody secrets in this film: Finn has a spy in the First Order! Meanwhile Rey is working on developing her control of the Force and on fighting techniques with the Light Sabre. Ren is able to affect her abilities through telepathic contact, Anyway Rey, Finn, Chewie et al head off on a quest.

I just feel that I've encountered all of this before, secret family links, a Jedi undergoing training, even races with speeders, causing the pursuers to crash. Some good Light Sabre duels and spaceship battles but nothing new. One bonus is that we get to see the wreckage of the second Death Star which crash-landed on a planet. Plenty of adventure and quests across the galaxy but the film is overlong and could easily lose 20 minutes in it's running time. Director/Writer J.J. Abrams delivers a disappointing conclusion to the Star Wars sequel trilogy. We need more like Rogue One and Solo! 6/10

ramonmercado said:
We need more like Rogue One and Solo! 6/10
Click to expand...
No, we need my experimental Gonk biopic. 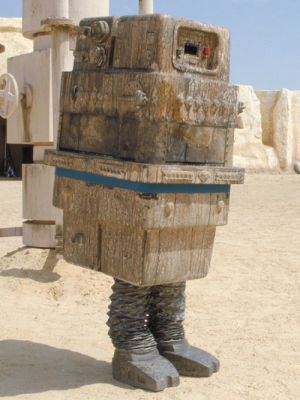 Ogdred Weary said:
No, we need my experimental Gonk biopic.