A World War Two relic has been revealed on scorched ground along the Irish coast after record temperatures sparked wildfires across Europe.


The whitewashed signs spells the word Éire, meaning 'Ireland' in the Irish language, and acted as a navigational message to both Allied and German pilots. 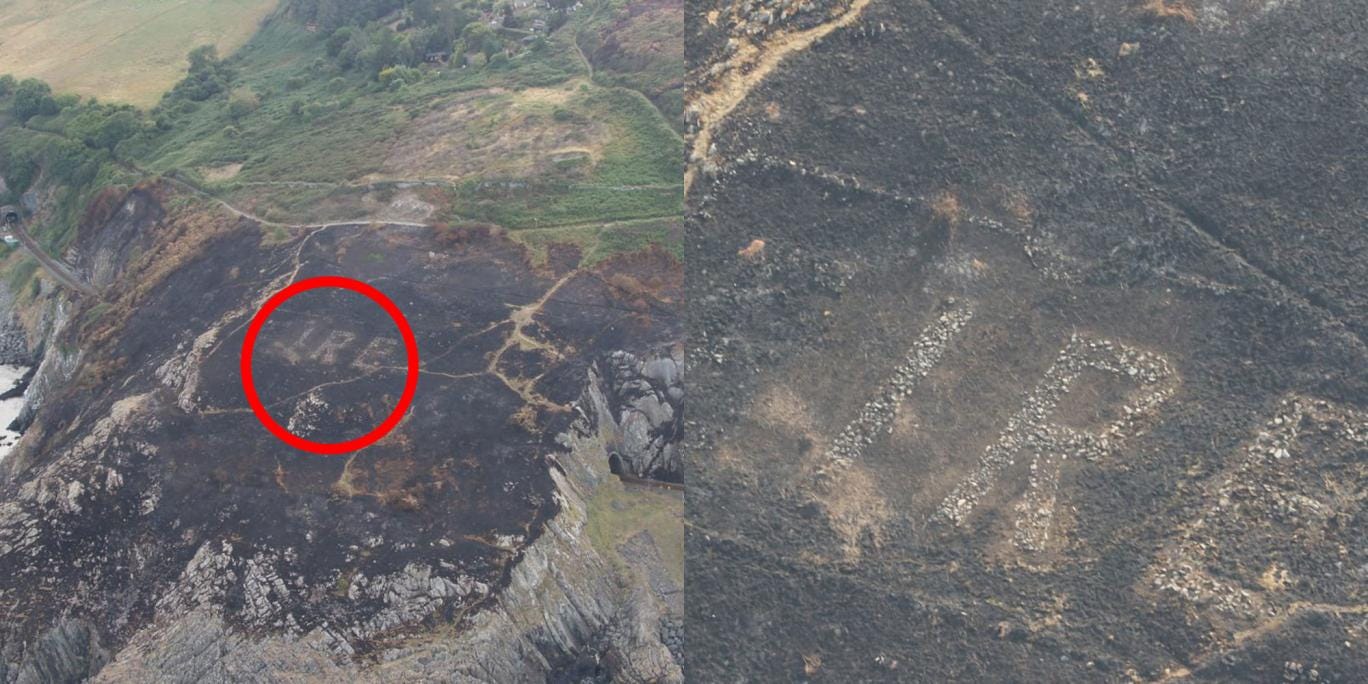 Tribble said:
A World War Two relic has been revealed on scorched ground along the Irish coast after record temperatures sparked wildfires across Europe.


The whitewashed signs spells the word Éire, meaning 'Ireland' in the Irish language, and acted as a navigational message to both Allied and German pilots.

https://www.indy100.com/article/eire-sign-ireland-wildfires-coast-second-world-war-8479181
Click to expand...
All I can see is 'ire', which would annoy me!

Mythopoeika said:
All I can see is 'ire', which would annoy me!
Click to expand...
Apparently Ire is German slang for a "Paddy" or Irishman. It would get the message across to German pilots - don't bomb here!

Mythopoeika said:
All I can see is 'ire', which would annoy me!
Click to expand...
Maybe it says "FIRE". Always looking ahead to the future, those sign designers. 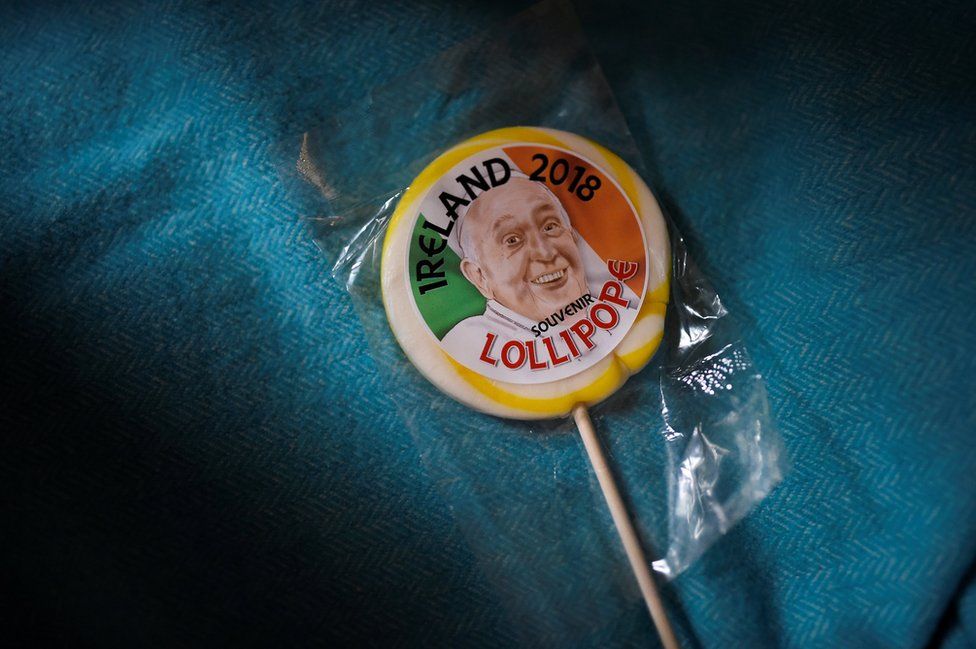 https://www.instagram.com/p/Bm8OUSzDjgz/?taken-by=garrattwilliam
Click to expand...
Reminds me of Paddy Knievel the Irish stunt driver. Kept trying to jump over 20 brits in a steamroller, kept failing, kept trying though 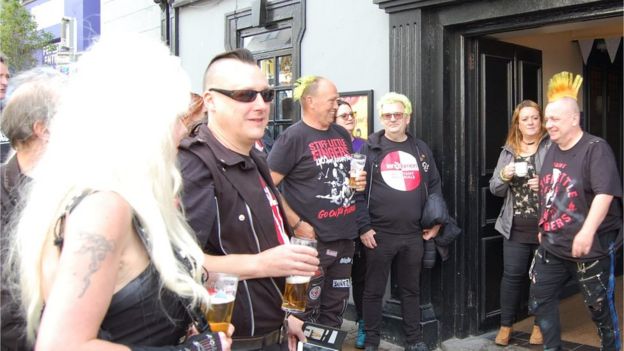 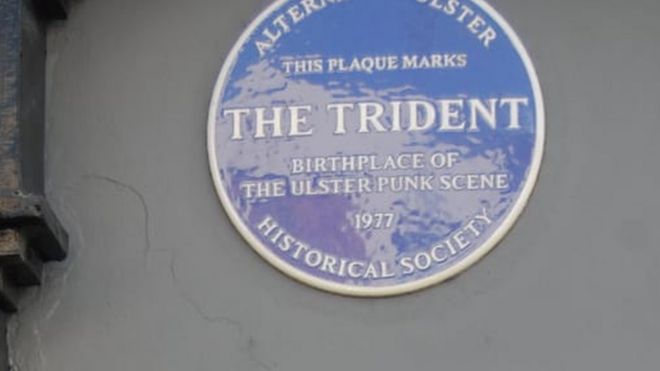 Image caption The plaque was commissioned by the Alternative Ulster Historical Society
Joy Carson cut an incongruous figure among the crowd gathered outside her former bar in Bangor.

Well-coiffured and neatly dressed, she listened as an impressively-mohicaned punk on six-foot stilts performed the unveiling ceremony to applause and cheers.

The blue plaque is one of a kind in Northern Ireland, commissioned by the Alternative Ulster Historical Society "to mark the Trident, birthplace of the Ulster punk scene 1977".

Joy was invited to the event by punk historian Dee Wilson and director of the Open House Festival, Kieran Gilmore.

Joy and her husband owned the pub in the 1970s when bands such as Stiff Little Fingers, Rudi and The Outcasts played a series of iconic gigs that Dee believes marked the real beginning of punk music in Northern Ireland.

"I was in a mixed marriage," explained Joy.

Image caption Punks gathered outside the former Trident Bar in Bangor's High Street for the unveiling of the plaque
"We thought at the time it would be great to get the divide to come together - have a good night - and that's how it came about," she explained.

"It's fantastic, bringing back all the old memories, talking about all the old ones who came into the bar - a lot of them are here today.

"It's excellent. It should have been done years ago."

Music venues and musicians are commemorated by the Ulster History Circle, but they declined Dee's request to place one of their plaques on the Bangor bar.

So, Dee and Kieran took matters into their own hands and the unveiling became part of the Open House Festival's tribute to punk, headlined by Public Image Limited on Saturday night. 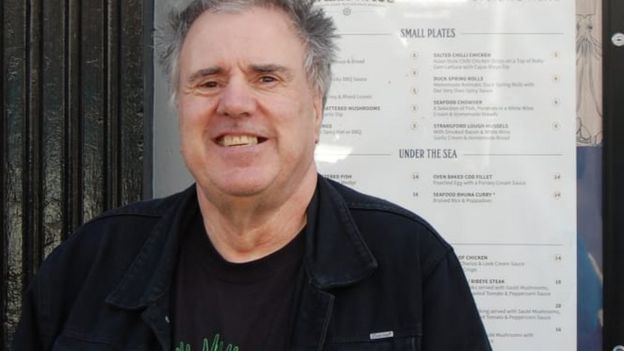 Image caption Henry Cluney, one of the original members of the Belfast punk band Stiff Little Fingers whose anthem "Alternative Ulster" celebrated the Trident in Bangor
"In the seventies I was a 15-year-old flute player in east Belfast," recalled Dee.

"But I'd no interest in it. I just tagged along because everyone else was doing it. Then punk came along.

"It gave me something. People never asked you what you were - whether it was sexuality or religion - it brought all the social barriers down.

"You came in to the Trident and nobody cared what you were. This was our domain, this was our spot."

The first gig showcased Rudi, then Stiff Little Fingers (SLF) and Rufrex and The Outcasts. 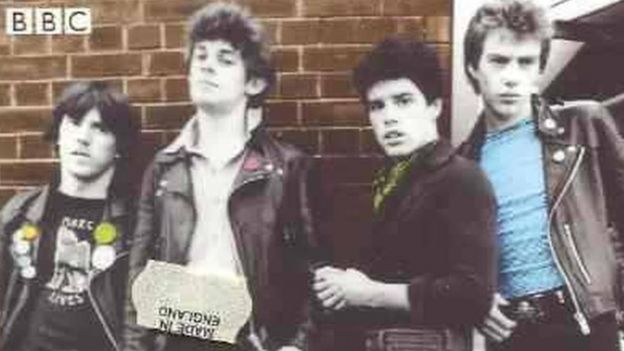 Image copyright Stiff Little Fingers
Image caption Stiff Little Fingers came to prominence during Belfast's punk movement in the 1970s
Famously, the experience of playing the Bangor venue was transferred into punk legend by SLF through the opening lines of their anthem "Alternative Ulster":

"There's nothin' for us in Belfast

"The Pound's old, and that's a pity

"OK, so there's the Trident in Bangor

"And then you walk back to the city."

Alternative anthem?
Henry Cluney was in the original SLF line-up and remembers the genesis of the song via Gavin Martin - the Bangor man who published the fanzine Alternative Ulster.

He was delighted to see the plaque in place and pleased that the song is still remembered - but is modest about its reach.

"So many times, we've been told it's the alternative national anthem," said Henry.

"I don't think it'll ever die. Even if the places disappear, it'll still have legs.

"I think punk helped move things forward. People always come together for music and they always will.

"And yeah, I think we're proud of that side of things."
Click to expand...

A song about Ryanair by Fascinating Aida ..

Templer was a hard-nosed non-nonsense bastard and a Second World War hero born in England but of Irish extraction, who commanded the Royal Irish Fusiliers during the Great War. He took the top job in Malaya, fighting communist insurgents. This scene is easy to imagine: 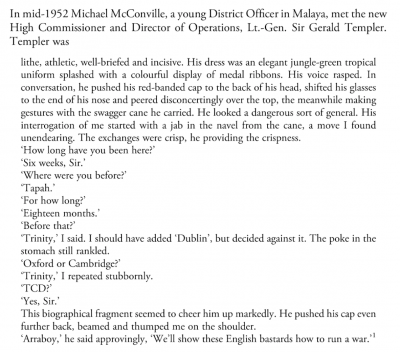 ramonmercado said:
Click to expand...
The Tain is my favourite album of theirs but kudos for linking this.

Harriet, the singing donkey of Connemara

See your singing ass and raise you a pack of Canadian bears, a pig, a setter and a raccoon all amiably sitting around guarding a dope crop.

Loooooong time since I've been that locked.

A 1901 report, The Increase of Lunacy in Ireland, compared census returns from 1851 and 1891, showing “nearly three times as many lunatics both at large, and in asylums, in the latter year”. Our reporter added: “Since the year 1891 we have had a constant and well-marked increase in the number of ‘registered lunatics’.” Legally, a “lunatic” was defined to mean any person “found by inquisition idiot, lunatic, or of unsound mind, and incapable of managing himself or his affairs”.

Our correspondent went on to enumerate popular theories for this increase. The resulting 117-year-old listicle, gives an indicator of some of the unenlightened – and surprising – views about mental health at the start of the 20th century.

“The following are the reasons usually assigned for the spread of insanity in Ireland.”

(1) Poverty, and hence poor and innutritious food
“It has long been recognised by the medical profession that in one predisposed to nervous ailments or insanity anything which causes a great lowering of the vitality of the individuals tends to produce these evils, or to aggravate them if once produced. In Ireland the poorer classes are often very badly fed, and have to work very hard, and the combination of these two circumstances so lowers their vitality that they readily become a prey to various forms of neuroses or nervous complaints.”

(2) Heredity
“The children of insane parents are often themselves insane, and also the children of parents who, though not insane, are yet eccentric, or perhaps drunkards or epileptics, often develop insanity. The offsprings of unsound, imperfectly developed, or degenerate parents are liable to show signs of insanity. ...

Click to expand...
Great. The boys only grab the mic ... no, not to spout political, but to croon a verse or two. The Bloody Irish. God love 'em. 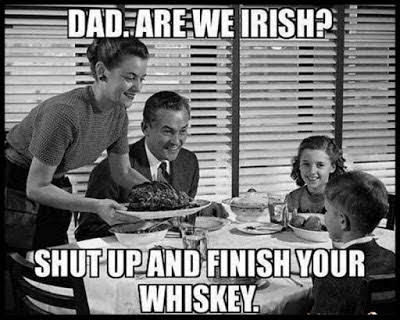 Did you know Crowley was Irish? 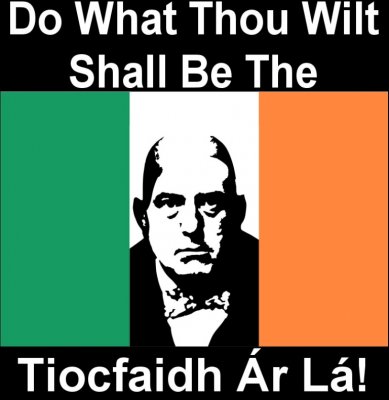 Been Irish all my life, don't think it's done me any harm.
Wife has just called me for tea and potatoes.