Francis Leadon, who died on August 4th in Mullingar Regional Hospital, was was one of the 70,000 Irish men and women who contributed to the Allied War effort.

For boys growing up in the 1930s aviation was as exotic as space exploration is today. Flying was confined to the privileged and wealthy. The advent of hostilities changed that at a stroke. Frank seized the opportunity and enlisted for the Royal Air Force, by falsifying his age. He showed exceptional flying ability and was despatched to the USAF Flying Academy at Pensacola, Florida, to train as a torpedo bomber pilot.

Frank was invited to join the all-volunteer Pathfinder Force by the legendary Hamish Mahaddie, on the personal recommendation of his Commanding Officer. The Pathfinder Force were Bomber Commands elite. Their role was to remain over the target, marking and remarking specific targets with incandescent flares for the bomb aiming guidance of the Main Force that followed behind them. Main Force crews spent a few minutes over the target. Pathfinder crews spent many times longer and their life expectancy was therefore significantly shorter than that of their Main Force counterparts.

​
Click to expand...
My utmost respect goes to any man that flew with the allies in the war--and the Pathfinders were real pioneers--but the fact that some Irish lads didn't have to be there makes their service even more worthy of thanks.


Richard Williams, the Oscar-winning animator who worked on the hit film Who Framed Roger Rabbit, has died aged 86.
Williams, who was born in Toronto but moved to the UK in the 1950s, won two Oscars and a Bafta for his work as animation director on the 1988 film, which starred Bob Hoskins.
The triple Oscar and triple Bafta winner also worked on two of the Pink Panther films and Casino Royale.
Williams died at his home in Bristol on Friday, his family announced.
etc
Click to expand...
https://www.bbc.co.uk/news/entertainment-arts-49382175

Bigphoot2 said:
https://www.bbc.co.uk/news/entertainment-arts-49382175
Click to expand...
Sad news. My girls and I were just talking about a rewatch of WFRR earlier today. It is genuinely among my favourite films.

Peter Fonda always came across like a genuinely decent guy, and had great anecdotes in his interviews. Yes, Easy Rider will always define him, but before it he was in The Wild Angels ("We wanna be free, to, to do, do what we wanna do!") and The Trip where he had the titular LSD experience, and after that he had a pretty great genre movie career in stuff like Dirty Mary Crazy Larry (that ending!), Race with the Devil (holidaymakers vs Satanists!) and The Limey (where he played his Easy Rider antithesis, and did it really well). Plus he was Oscar nominated for the quietly affecting drama Ulee's Gold. He was in loads of stuff, and if he wasn't as good an actor as his father, he did try. RIP.

Richard Williams leaves a legacy of Roger Rabbit, a few short toons, and a ton of adverts. Not to mention a ton of unfinished projects, that was his tragedy, his grand plans rarely worked out. The Thief and the Cobbler should have been his masterpiece, but it was taken out of his hands and shoddily edited into a disappointment. Hugely talented, but I wish his career had been so much better for him. RIP.

Race With The Devil, Fonda fights Satanists. I remember enjoying it decades ago, sort of Folk Horror.

ramonmercado said:
Race With The Devil, Fonda fights Satanists. I remember enjoying it decades ago, sort of Folk Horror.
Click to expand...
It's more connected to the US obsession with Satan that was all over their horror movies in the 1970s, crossed with a car chase flick. Surprised it hasn't been remade. Calling Nicolas Cage?

Dr. Liane B. Russell, a pioneer in the study of the dangers of radiation on developing embryos, whose findings are the reason doctors today ask women if they are pregnant before giving them X-rays, died on July 20 in a hospital in Oak Ridge, Tenn. She was 95.
The cause was pneumonia following treatment for lung cancer, her son, David Russell, said.

Wearside Jack dies.
John Humble the guy who sent the police investigating the Yorkshire ripper murders on a wild goose chase after posting hoax letters and audio tapes has died.
When identified he went to prison for 8 years for perverting the course of justice.

Yeah, I won't be wishing him the best in his eternal rest.

Danny Cohen, the Israeli-born computer pioneer who, in 1967, created the first ever visual flight simulator and came up with the concept of endianess* has died aged 81. * or possibly 18

He became a high-profile member of the Flat Earth Society - so he could troll it!
I'll raise a glass to him next time I play Rise of Flight.

blessmycottonsocks said:
endianess
Click to expand...
when I taught the idea we always seemed to wander off down the Gulliver's Travels egg schism route!

An all round good bloke...

Former Nationals leader and deputy prime minister Tim Fischer has died at the age of 73 from an acute form of leukaemia.

A widely respected and quirky political figure, Mr Fischer's remarkable career began as a 20-year-old conscript fighting in the jungles in Vietnam and ended in the Vatican as Australia's top diplomat.

But the Boy from Boree Creek (a tiny town near Wagga Wagga) made his greatest contribution in politics and will be remembered for the key role he played in reforming Australia's gun laws.
Click to expand...
https://www.msn.com/en-au/news/aust...-leukaemia-aged-73/ar-AAG9PQM?ocid=spartandhp

Lord Lucan said:
An all round good bloke...

https://www.msn.com/en-au/news/aust...-leukaemia-aged-73/ar-AAG9PQM?ocid=spartandhp
Click to expand...
He was a good egg, and shall be greatly missed...

A wonderfully quirky character-actress, very active in children's tv as well as more risqué comedy rôles, she soon came to be recognized as a name in the cast and not just "that woman with the funny face." Seldom the star, she enlivened every production she was in.

Are we still rich in character actors? Plenty of notice-me eccentrics, I think, though, I admit, I am very out-of-touch with current telly.

No one can ever replace the most distinctive of these figures. RIP.

Aw no! Another face from my childhood gone. I enjoyed her appearances in the repeats of The Good Old Days a while ago.

From that obit:
"[She] published a series of short anecdotal stories based on real life encounters entitled Bastards (2012)." Sounds like a good read! RIP.

Sad. I vaguely remember her from Mythbusters.

Forever intertwined into history and perhaps for not the best of reasons...

Jim Leavelle, Lawman At Lee Harvey Oswald's Side, Dies At 99

Dallas (AP) -- Jim Leavelle, the longtime Dallas lawman who was captured in one of history's most iconic photographs as he escorted President John F. Kennedy's assassin as he was fatally shot, has died. He was 99.
Leavelle, distinctive in his light-colored suit and white Stetson, is seen in the photograph with his hand on Lee Harvey Oswald, Leavelle's body stiffening as nightclub owner Jack Ruby shot the handcuffed presidential assassin at close range on live TV in 1963. Leavelle appears shocked as Oswald grimaces in pain.

He was perhaps the littlest big guy...

Columbu was a legend in the strength sports industry as he competed in body building, powerlifting and strongman competitions.
He twice won the Mr. Olympia contest in 1976 and 1981 and built a close friendship with Schwarzenegger over the years.

Reports out of Italy state the former strongman champion lost his life in an incident at sea in Sardinia, Italy.

Schwarzenegger often referred to Columbu as the strongest man he ever knew, with the two men building a friendship after first meeting in Munich 54 years ago.

He appeared alongside Schwarzenegger in blockbuster movies “The Terminator”, “The Running Man” and “Conan the Barbarian”.
The movie star and former Governor of California paid tribute to his best friend in a touching post on social media and with a moving tribute on website medium.
Click to expand...
https://www.news.com.au/sport/sport...u/news-story/2dd93e926733b042c0adaa6c7280067e

Terrance Dicks, writer for Doctor Who (and wrote shedloads of the Doctor Who novels), 89 :

https://www.radiotimes.com/news/tv/2019-09-02/doctor-who-writer-terrance-dicks-dies/
Click to expand...
84 not 89. Nice guy, met him loads of times and he always had time for everyone.

I practically grew up on Terrance Dicks books, both Doctor Who and his other books for children. As Jenny Colgan said, he's responsible for countless people, especially boys, getting their lifelong love of reading. I went on Amazon and saw his Star Quest books are now available as a trilogy compilation - very tempted, I only ever read the first one and the local library didn't stock the sequels! RIP.

https://www.radiotimes.com/news/tv/2019-09-02/doctor-who-writer-terrance-dicks-dies/
Click to expand...
For someone who really struggled a fair bit with reading early on, he helped me a great deal with his Target books.

I can't claim my grammatical skills have improved much but without Terence Dicks, Peter Haining, Peter Underwood, Usbourne, etc I would have never fallen in love with books.

June Lancelyn Green, widow of Roger Lancelyn Green, passed away at the age of 93. She was the family friend I alluded to in this thread. She was also the mother of Richard, the Sherlock Holmes expert whose death was discussed here. A very nice lady who had time for everyone.

The family estate, Poulton Hall, is also really cool. Gardens themed around Narnia and Wonderland. If you ever get the chance to visit during an open doors day, visit. 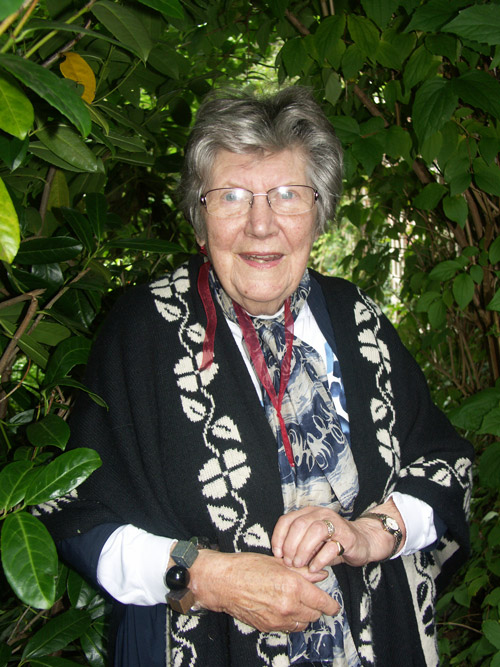 Tribble said:
widow of Roger Lancelyn Green
Click to expand...
As a boy, I was engrossed by Roger Lancelyn Green's version of the Robin Hood stories (1956). It was not prettified for young readers. I was forever haunted by the ending, in which he is bled to death by his aunt, the prioress. Her sinister visits to loosen his bandages were much more quietly upsetting than any number of deaths in combat! RIP.
Last edited: Sep 5, 2019

Why do the good die young...