The Secret World Of Tibet

I want to watch this as i've been told it's excellent viewing, but i'm outside the Uk!

Can someone please help me find a way to work-around. (Uk-based proxies?)

The rest of you UK-bound people can enjoy it and whet my appeitite with comments.
L

Could be a naughty way, but how about a torrent? Somebody may well have created one (without the iPlayer DRM).
B

It's with Dutch commentary and subtitles but ok though

Thank you very much.

A treasure trove of Tibetan art and manuscripts uncovered in "sky high" Himalayan caves could be linked to the storybook paradise of Shangri-La, says the team that made the discovery.


The 15th-century religious texts and wall paintings were found in caves carved into sheer cliffs in the ancient kingdom of Mustang—today part of Nepal. (See pictures of the "Shangri-La" caves and their treasures.)

Few have been able to explore the mysterious caves, since Upper Mustang is a restricted area of Nepal that was long closed to outsiders. Today only a thousand foreigners a year are allowed into the region.

In 2007 a team co-led by U.S. researcher and Himalaya expert Broughton Coburn and veteran mountaineer Pete Athans scaled the crumbling cliffs on a mission to explore the human-made caves.

(Get Coburn's impressions of the challenges of reaching the Shangri-La caves in the December/January issue of National Geographic Adventure magazine.)

Inside the caves, the team found ancient Tibetan Buddhist shrines decorated with exquisitely painted murals, including a 55-panel depiction of Buddha's life. (See a picture of one of the Buddhist murals.)

A second expedition in 2008 discovered several 600-year-old human skeletons and recovered reams of precious manuscripts, some with small paintings known as illuminations.

Watch video from the 2008 expedition in a preview of Secrets of Shangri-La
Click to expand...

In many ways the town of Shangri-La, high up on the Tibetan plateau in Yunnan province, western China, lives up to the image of its name. Being at such an altitude can cause dizziness, a touch of euphoria. A yak ambles past, the gentle thonk, thonk of the bamboo bell round its neck punctuating the early morning silence. Then, from far off, the echo of a cuckoo greeting the rising sun. “It’s all a carefully built myth,” says the man with skin like tanned leather sitting in the yak meat restaurant in Shangri-La’s main street.

“The prayer wheel was only put there a few years ago. Most of the ‘old’ houses are newly built. It’s all been constructed for the tourists.” My companion – I’ll call him Li – is a former university lecturer from eastern China, exiled to this remote corner of Yunnan during the ravages of Mao Tse Tung’s cultural revolution. Now living elsewhere, he has come back for a visit. “I was sent to Shangri-La as punishment.” A laugh turns into a gravelly smoker’s cough.

“There was not much here in the old days – but then the communists saw they could make lots of money out of tourism.”

In the 1930s, James Hilton, a British writer, first wrote about “Shangri-La” in his novel Lost Horizon . Hilton conjured up an idyllic land of learned lamas where time stood still, where people never grew old, where there were no conflicts or wars and where crops and fruit grew in abundance. Films were made, a perfect world was formed. The story is a good read, a work of Hilton’s fertile imagination: in fact, he never visited China, and wrote his book in north London.

Over the years, several places in China – and in Nepal, Pakistan and Bhutan – claimed the title of Shangri-La. Then, 10 years ago, enterprising officials in what was then the small town of Zhongdian gathered journalists from all over China, lavishing gifts and hospitality on them. The journalists went away and obligingly wrote about the beauties of Shangri-La. Beijing decreed a name change, a myth became reality – and the tourist dollars started to flow.

Unlike Hilton’s mythical region, present day Shangri-La has its tensions. Though the local population is made up mainly of Tibetans and those who Beijing refers to as minority peoples, in recent years there’s been a large influx of Han Chinese from more densely populated eastern China. Outside the tourist town another, uglier, Shangri-La of cement-block built malls and offices has grown up. There’s a substantial military base outside the town, and imposing buildings, constructed in the style of Tibetan lamaseries with numerous small windows on each side, house the local communist party headquarters and the security services.

In the valleys below the town a giant road scheme, the Yunnan-Tibet highway, is snaking its way across hundreds of miles of landscape. The area in and around Tibet is rich in minerals: soon they are likely to be exploited to feed China’s ever growing economy. Shangri-La and other areas will be further developed.

We sit in the town’s very modern Paradise Hotel and share a bottle of Yunnan wine. The taste is light and pleasant. Centuries ago, Jesuit missionaries planted vines in the area. “The locals don’t like the way the newcomers control the tourism industry and the economy,” says Li. “But on the other hand there’s far more money about and people can build their houses and send their children to school.” Away from the town and its souvenir shops, there’s still a haunting beauty about the region. In the evening I plod up a steep hill to a Tibetan temple, careful to take long, slow breaths in the oxygen-starved air. Here on the roof of the world the nights are sharp and clear, the stars seem much closer.

A lama is in the midst of his highly energetic prayers – repeatedly prostrating himself and jumping up: he then collapses into a corner – and plays a game on his mobile phone.
Click to expand...

For more than two decades, University of Virginia Tibet Center archaeologist and historian John Vincent Bellezza has been exploring highland central Asia, going places where few archaeologists and explorers have ventured. Since 1992, he has investigated and documented scores of monumental sites, rock art, castles, temples, residential structures, and other features on the desolate reaches of the Tibetan Plateau, building a knowledge base on a vast archaic civilization and ancient religion that flourished long before Buddhism emerged and dominated this otherwise comparatively sparsely populated high altitude region.

“Commonly, when people think of Tibet, Buddhism comes to mind,” writes Bellezza in his newest book, The Dawn of Tibet. By this he also implies the better-known and popular images of the imposing, sky-high, mountaintop monumental wonders of Buddhist centers such as Lhasa. But, he continues, “before Buddhism was introduced, a different type of civilization reigned in Tibet, one with monuments, art, and ideas alien to those of more recent times……….Demarcated through an enormous network of citadels and burial centers spanning one thousand miles from east to west, it would endure for some fifteen hundred years.”*

Bellezza is describing an archaic civilization known as Zhang Zhung, which flourished from about 500 BC to 625 AD and encompassed most of the western and northwestern regions of the Tibetan Plateau. Mastering an ancient technology base not normally attributed to peoples of this region in the popular perception, the people of Iron Age Zhang Zhung, according to Bellezza, built citadels, elite stone-corbelled residential structures, temples, necropolises featuring stone pillars, sported metal armaments and a strong equestrian culture, established links with other cultures across Eurasia, and exhibited a relatively uniform and standardized cultural tradition rich in ritualistic religious practice, where kings and priests dominated the highest rungs of power. These are all characteristics of stratified, centralized and developed societies most often associated with the more southerly, lower-altitude great Old World Bronze and Iron Age civilizations that ringed the Mediterranean as well as the advanced civilizations of Mesoamerica and South America. The supporting findings on the landscape, when considered across two decades of investigation, have been nothing less than prolific.

Archaeologists in "Tibet autonomous region"* believe the ninth century Purang stele to be the oldest in the region. 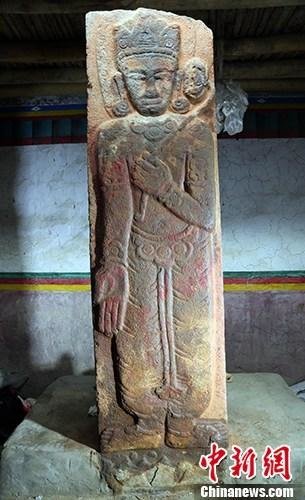 The stele is 1.85 meters tall, inscribed with the image of a standing Buddha.

On its left side are 24 lines of old Tibetan language. On its right side are 19 lines of Buddhist prayers.

Shargan Wangdue said most scholars agree that the stele was set up in 826 or 838, during the period of Tubo kingdom.

*This stele shows Buddhism was already being practiced during the Tubo period in western part of Ngari," Shargan Wangdue said.

I wasn't able to find it but do we have a thread about the claims of tibetan monks using sound to make things levitate?

Xanatic* said:
I wasn't able to find it but do we have a thread about the claims of tibetan monks using sound to make things levitate?
Click to expand...

As far as I know the most substantive reference to this story is in the Levitation thread: