They Messed With The WRONG Person

At age 66, he's probably way beyond qualifying for a Darwin Award!

Here's a good one. It sounds like the plot of an 80s movie:

Paul K. Van Riper (born July 5, 1938) is a retired United States Marine Corps officer (Yith: Lieut. Gen). Since his retirement Van Riper has served on several advisory boards and panels. He is currently the Chairman of the Board of Directors for the Marine Corps Heritage Foundation.

Van Riper gained notoriety after the Millennium Challenge 2002 wargame. He played the Red Team opposing force commander, and easily sank a whole carrier battle group in the simulation with an inferior Middle-Eastern "red" team in the first two days.

To do this, Van Riper adopted an asymmetric strategy. In particular, he used old methods to evade his opponent's sophisticated electronic surveillance network. Van Riper used motorcycle messengers to transmit orders to front-line troops and World War II light signals to launch airplanes without radio communications. Van Riper used a fleet of small boats to determine the position of the opponent's fleet by the second day of the exercise. In a preemptive strike, he launched a massive salvo of cruise missiles that overwhelmed the Blue forces' electronic sensors and destroyed sixteen warships. This included one aircraft carrier, ten cruisers and five of six amphibious ships. An equivalent success in a real conflict would have resulted in the deaths of over 20,000 service personnel. Soon after the cruise missile offensive, another significant portion of the opposing navy was "sunk" by an armada of small Red boats, which carried out both conventional and suicide attacks that capitalized on Blue's inability to detect them as well as expected.

After the simulation was restarted with different parameters, he claimed that the wargame had been fixed to falsely validate the current doctrine of the U.S. Navy.

You can imagine somebody at the top of the command chain yelling about how he wants this trouble-maker relieved of his command and sent to the back of beyond, only to be informed that he retired five years earlier and was just keeping his hand in.

Found through a discussion on an economics website.
Warning: pretty grim!

Edit: embed removed. If you want to see somebody shot dead, follow link:
www.youtube.com/watch?v=YlIbuYIcMXY&frags=pl%2Cwn
Last edited by a moderator: Jul 25, 2018

escargot1 said:
As I may've mentioned before, in my research for my Criminology MA I read an interesting paper about the response of yer classic 'Crimewatch' rapist to a woman's resistance.

Rapists in several British prisons were interviewed (I forget how many, could look it up if anyone's really interested) who had committed a specifically kidnapping-themed offence, where they'd abducted a woman to rape.

They were asked many questions, including some about how they'd respond if the woman tried to fight back and made a noise.

Their answers were split almost evenly between those who'd be put off and those who'd find it no problem or even a turn-on - about 51/49%.

So if this very particular disaster should befall a woman, she has about a 50/50 chance of fighting off the attacker, even with no self-defence skills. That's a good enough reason to learn some.
Click to expand...

I'm trained in self defense. It must be different here in Canada. We are taught that once the offender is down, not to run, but to cause further injury (like stomp on his face or throat before you run) to make sure we have time to get away without being perused.

We are also taught to never, ever, allow ourselves to be taken to a second location. You might as well fight to the death right where you're standing because the only reason someone wants to take you somewhere else is for more privacy and more time to inflict damage on you.

Most victims that are taken to a second location are never seen alive again.

davidplankton said:
This looks quite nasty. But they could have walked away at any time.

That's another thing that must be different here in Canada. A bouncer is not allowed to follow you outside to fight further. Not only will he/she be fired, they will also be charged by police.

Here's a story of true chivalry that should put a smile on everyone's face ..

Swifty said:
Here's a story of true chivalry that should put a smile on everyone's face ..

That was great. Thanks for sharing.

That was great. Thanks for sharing.
Click to expand...

The original poster was cool enough for willing to step up .. and then some Clint Eastwood type took control

Swifty said:
The original poster was cool enough for willing to step up .. and then some Clint Eastwood type took control
Click to expand...

That's exactly the image I had going through my mind when I read it :cowboy:

Bigphoot2 said:
That's exactly the image I had going through my mind when I read it :cowboy:
Click to expand...

In that case, this deserves a re post :cowboy: (why that kid even stopped walking is beyond me) NSFW ..

Gay bloke getting beaten up by homophobes is rescued by drag queens. Liked this quote:

Octogenarian ends police standoff by climbing up and pushing suspect off his roof. Case closed ...

Crisis negotiators had been called to the neighborhood, where a man was jumping from rooftop to rooftop, Los Angeles County sheriff’s officials said.

The suspect was on one roof for about five hours before the elderly resident “got tired” of his antics, climbed onto the roof and pushed the man off, according to Sgt. Joseph Morales.

“The grandpa did what we couldn't,” Capt. Tim Murakami tweeted after the incident.
Click to expand...

Swifty said:
Here's a story of true chivalry that should put a smile on everyone's face ..

It should be made into a movie with Nic Cage or Liam Neeson playing the part of the cop.

Of course the guy pulls a gun of Nic/Liam and he ends up killing him. The guy is the son of a Russian mafia kingpin family and they kidnap Nic/Liam's daughter and murder her.

Nic and Liam set out for revenge.

Pick another gym next time!

Surveillance camera footage shared widely on social media shows the man entering the gym and jumping a turnstile after arguing with the receptionist. Several seconds later, the man is seen jumping back over the turnstile and fleeing outside. He is chased by several jiu-jitsu students dressed in uniforms.

Jiu-jitsu teacher Edgar Neto told The Associated Press that the incident happened Monday night and he reported it to police.

The man managed to escape. Police said Wednesday he hasn’t been arrested, but they have recovered one of his sandals that fell off during the chase.

Are they going to go around the neighbourhood trying it on random men?

Surveillance camera footage shared widely on social media shows the man entering the gym and jumping a turnstile after arguing with the receptionist. Several seconds later, the man is seen jumping back over the turnstile and fleeing outside. He is chased by several jiu-jitsu students dressed in uniforms.

Jiu-jitsu teacher Edgar Neto told The Associated Press that the incident happened Monday night and he reported it to police.

The man managed to escape. Police said Wednesday he hasn’t been arrested, but they have recovered one of his sandals that fell off during the chase.

Years ago when I did martial arts, we practiced in a church hall in the centre of town. One summer's night we had the doors open as it was really warm. Not long after we started a couple of youths come wandering in and start hurling abuse at the instructor. They were asked to leave several times and then one threw a punch at the instructor and was promptly sent flying by a kick to the abdomen. His mate picked him up and they legged it away.

It takes a special kind of stupid to pick a fight with the Chinese guy who is wearing a black-belt.


Shocking dashcam footage captures the moment a baseball bat wielding thug got more than he bargained for after coming up against a mixed martial arts expert.

The recording shows a thug leaping out of his car and grabbing a bat from his boot following an argument with the driver of a Peugeot 206.

After threatening the man with the weapon he then takes aim at the car - which proves to be a very costly mistake.

Grim? I thought it was fucking comedy gold!

Went to see my cousin and his wife today as they asked me round to see his orchids.
Their house is on a corner block and the other day my cousin noticed a fellow dumping an old pram and going to put out a car seat as well.
He told him not to do that and the guy asked for money so my cousin went inside.
His wife came out with her phone and photographed his number plates and said she was calling the police if he didn't put them back in his car. She used to be in charge of a government department before she retired so she takes no nonsense.
So grumbling greatly he took his rubbish and drove away,(probably to dump it somewhere else).

Do not abuse your bus driver.

He messed with the wrong DOG:

There was a full suite doing the rounds in Fleetwood about 3 years back,
you would wake in the morning to find it in your yard, a call to the council
would get a price of £35 to remove it, a day or two later someone would
call offering to remove rubbish for £25, pay the £25 and off it goes to the
next victim, must have made a good few quid until the law caught up with
them.

Yithian said:
He messed with the wrong DOG: 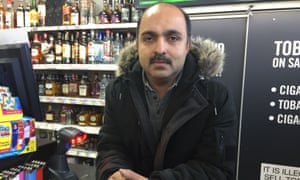 A man apparently trying to carry out an armed robbery on a corner shop on Christmas Eve ended up pinned to the floor by the shopkeeper – a black belt in karate – and “begging” to be released.

CCTV footage showed the man threatening Sibu Kuruvilla and an assistant with what appeared to be a pistol inside the shop, before being thrown to the floor. Police later arrived, alerted via the shop’s silent alarm.

It doesn't matter how annoyed you are with a security guard or how bad you were at physics, you've got to realise that this is a miscalculation when you see the size-difference.

Yithian said:
It doesn't matter how annoyed you are with a security guard or how bad you were at physics, you've got to realise that this is a miscalculation when you see the size-difference.
Click to expand...

That video made me happy.

maximus otter said:
That video made me happy.

Prison escapee convinces cop he's actually a jogger (I expect he got picked up further down the road) .. God loves a trier ..

"He was so good, I still believe he was a jogger."

Armed robber points gun at mums and schoolgirls ..... and gets his just desserts:

blessmycottonsocks said:
Armed robber points gun at mums and schoolgirls ..... and gets his just desserts:

Waving a gun at an off-duty cop - UNlucky.