I'm with you, Ramon, I think it's one of the more interesting items in post-colonial cinema, but it does go on a bit. It's the families back home I felt sorry for.

Ghosts was one of the subjects on the Unbelievable Truth. But it’s ok, they don’t exist because David Mitchell says they don’t. So that’s all sorted, never mind the millions of people who have experienced something over the centuries.

Ghosts definitely don't exist because otherwise the Large Hadron Collider would have found them, claims Brian Cox.
There's no space in the world for spirits to inhabit

Bad Bungle said:
Ghosts definitely don't exist because otherwise the Large Hadron Collider would have found them, claims Brian Cox.
There's no space in the world for spirits to inhabit

Well Brain is a cox. But we don’t know what ‘ghosts’ are. I hate the way both of them disregard people (millions) who have experienced something. Science is forever learning about things as we go along.

We don’t know what happens when people experience things. And as I’ve said in another thread I don’t believe ‘ghosts’ are just one thing.

I still dream of Orgonon

MorningAngel said:
Well Brain is a cox. But we don’t know what ‘ghosts’ are. I hate the way both of them disregard people (millions) who have experienced something. Science is forever learning about things as we go along.

We don’t know what happens when people experience things. And as I’ve said in another thread I don’t believe ‘ghosts’ are just one thing.
Click to expand...

I agree. I think any scientist worth their salt should remain sceptical but open minded when it comes to the paranormal. I'm fine with someone stating certain phenomena are unlikely to be 'real', but I find it problematic when people automatically treat scientific theories as dogma. I often feel like we're constantly on the edge of discovery and there is a LOT for our species to learn yet. I just hope we don't destroy each other before we get to really exciting stuff.

It's part of the reason I really dislike Richard Dawkins. I'm not a religious person but I find his absolute rejection of religion and the idea of God to be arrogant, narrow minded and frankly, unimaginative.

This is on BBC Radio (World Service) tomorrow (Thursday), The Forum - The Kalevala: the Finnish epic that inspired a nation.

This has probably already been mentioned but did anyone else listen to the BBC Radio series - The Battersea Poltergeist? I thought Toby Jones was brilliant as Harold S. W. Chibbett.

Cloudbusting said:
It's part of the reason I really dislike Richard Dawkins. I'm not a religious person but I find his absolute rejection of religion and the idea of God to be arrogant, narrow minded and frankly, unimaginative.
Click to expand...

That's why I love Dawkins.

In some cultures rejecting gods/religions is a serious offence. It was like that here in Britain at one time.

Even in the '60s when I was growing up in a northern backwater not noted for strict religious observance, people made the effort to look reverent because not to be was considered unrespectable.
Children had to be taught R.E. in every school and most still pushed bible stories. Being able to reject all that was liberating.

KingFrostmare's having a "live" streaming marathon of his old videos.

I found this on BBC sounds.

The Champions is coming to Talking Pictures. One of my favourite shows when I was a puppy
https://www.the-medium-is-not-enough.com/2021/02/talking-pictures-march-2021-the-champions.php

Bigphoot2 said:
The Champions is coming to Talking Pictures. One of my favourite shows when I was a puppy
https://www.the-medium-is-not-enough.com/2021/02/talking-pictures-march-2021-the-champions.php
Click to expand...

Frozen and isolated at the end of the earth. A chilling tale based on one of polar exploration’s deepest mysteries, with a crew stalked by a murderous presence. From Ridley Scott.
Click to expand...

I read the Dan Simmons book a while ago, well worth a read if you have the time

If available to people it might be worth looking at the new Netflix documentary, Murder Among the Mormons.

The predictably tabloidesque title distracts somewhat from what was a really quite bizarre case centred right in the heart of a generally bizarre world.

Way back in 2005 I wrote the following on Mark Worrall's book The Poet and the Murderer, which concerns the same subject (the poet being Emily Dickinson - another focus of Hofmann's artistic endeavours):

Simon Worrall's book The Poet and the Murderer about the literary forger and murderer Mark Hofmann illustrates much that is bizarre in the Mormon faith. (In deference to any Mormons reading this I'm not picking on you - I find all religions bizarre).

Hofmann, a Mormon himself, exploited the faith's obsession with geneology and, what looks to an armchair psychologist like myself, its desperate search for historical legitimacy through the obsessive hunt for and procurement of historical documents relating to the religion and its founders.

What is interesting to a Fortean is the way in which so many normal, intelligent individuals allowed themselves to be conned - presumably because their overwhelming desire for a thing to be genuine far outweighed their judgement. Hofmann turned up documents left, right and centre including items which its not much of an exaggeration to say were the Mormon church's equivalent to the Holy Grail. Rather than question his incredible luck, as I think any church outsider would have done, people paid fortunes for his "finds".
Click to expand...

I've only watched the first episode - pretty good so far, and a couple of right characters.

It's kind of a bit of a cliché, but you'd probably pass on this as way too far fetched if someone pitched it as a movie plot.
Last edited: Mar 4, 2021

Watched the rest of the above. Pretty good, but doesn't really go into Hofmann's other activities as a forger.

Hofmann was unbelievably prolific and incredibly talented. I'd recommend the book. There was also a documentary made maybe a year or so after publication - with the same title, I seem to recall - but I can't find it online.

Was tempted to pay to view The Terror when it was first broadcast back in 2018.
Never got around to it though, so quite glad to see it finally make its way onto iPlayer.
Watched all 10 episodes of the first series over 4 nights.
Atmospheric if rather slow paced but with brief moments of bloody (if implausible) action and some body horror.
Not sure there was enough material to stretch the yarn out to over 6 hours. Would perhaps have worked better as a feature film.
Don't know when or if series 2 will reach iPlayer, but I'm not sure I'll bother, as it is totally unconnected from the Franklin expedition and is based on Japanese fokelore in WW2 and sounds just plain weird.

There’s a suggestion that the excellent Time Team is to return in some form or another! 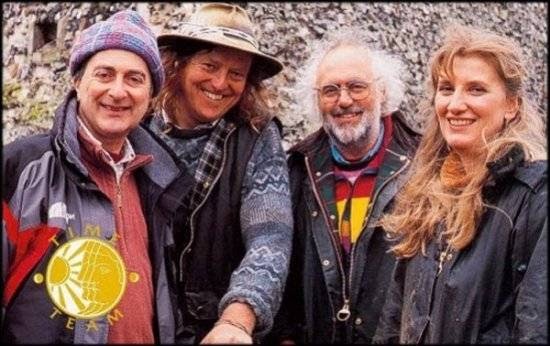 Unfortunately, both references l have seen to this are paywalled:

The Channel 4 programme will be revived on Youtube following a crowdfunding campaign by producers.

Watched 'Unacknowledged' last night on 'Blaze,' believe it was the 2017 version. Think I may have seen it previously, but this time paid more attention to the content.

We’ve just been watching The Irregulars on Netflix. It was very good but it would have been nice if they’d spent some more money on lightbulbs, it was very dark and hard to see a lot of the time.

In the early 1950s in rural Tennessee, there were no commercial fast food chains and no shopping centers.

If you wanted to buy something, you had to actually go into the town or village.

In 1953, I saw a crowd of people outside a window front of an appliance story.

Was there a robbery ?

No, RCA Entertainment had put a demonstration model of a color TV in the store front window.

I thought to myself, this is amazing, a color TV picture !