ravensocks said:
that very sweet scene when Briggs senior told him about his dream and vision of the man he saw Bobby to be. It was nice to see that vision worked out.
Click to expand...

Listen to Major Briggs, sampled with echo and heavy reverb. A remarkable speech from a great performance by a talented actor. Vale, Don Davis.

Knowing when the return of the show was announced that Don Davis was one of the cast who was no longer with us was initially something I thought could be problematic. He did at times provide some important exposition (well, as much exposition as you ever get with Lynch). But in the end I do think that his absence was both handled well and made good use of.

I had no idea that Don Davis had died. Just watched him in a repeat of Stargate a few minutes ago.

Yeah. Almost ten years ago now. Time flies, and all that.

Spoilers ahead: Mark Frost has provided some further info on the status of Audrey Horne, in Twin Peaks - The Final Dossier, released today.

If you wish to know what those are:

Spent the last few days with the Twin Peaks S3 box set (I didn't binge watch, I did other things in between, but it got more intense the further it went on). Judging by the online reaction this was real love it or hate it material, but I was delighted Lynch was back directing again and the disappointing Inland Empire wouldn't be his final word.

I didn't expect answers, and though I got a few I wasn't surprised it ended on another cliffhanger. One of the best things about TP was how much it cared for its central murder victim, she wasn't some throwaway character like you get on a lot of TV wanting to kick off their thriller plots, she really mattered. Couldn't you save her, Coop? Well, he had a good try, but it doesn't look like it's worked out.

Some of it made me laugh out loud, episode 8 was hallucinatory, it was great to see some of the old faces again (RIP Log Lady and Albert), it's like nothing else out there even with TP's influence all over TV for the past near-30 years. It proved Fire Walk with Me is essential and not an afterthought, and for that I'm thankful.

I followed this guy's video reviews after each episode and quite enjoyed his speculations. He has a distinctive delivery which might irritate initially, but it works once you get used to it. These first two vids introduce the new series and summarise questions from eps 1-4 of season 3. Subsequent vids review each episode one at a time. Worth a ganders. Enjoy.

My only real complaint over the revival was quite how many side plots and side stores appeared to go nowhere and never truly meet up in any tangible way. It was likely intentional, but obviously not quite so satisfying to the viewer.

henry said:
what do you guys make of the whole transdimensional convenience store angle
Click to expand...

I think it's neither here nor there, frankly.

have watched season one over last week or two, between classic movies, first exposure to the franchise although one of my early girlfriends was addicted at time of first broadcast

Underlined denotes those who have passed since S3 aired.

Been watching a YT channel called Corn Pone Flicks for recent in-depth analysis of the S3 plot and thematic structure. He's a competent fanalyst, but I haven't learned much I didn't already know.

henry said:
have watched season one over last week or two, between classic movies, first exposure to the franchise although one of my early girlfriends was addicted at time of first broadcast

Yes. At times it does feel very Soap Opera. This was very much network television kinda shepherding David Lynch to calm things down. Season 3 (The Return) is what happens when Lynch is permitted to do what he wants without a guiding hand. And it goes a bit too far in the other direction.

Stick with it, though. Season 2's later stages are very much worth it. They should cater more to what you're looking for.

henry said:
what do you guys make of the whole transdimensional convenience store angle
Click to expand...

I think it's a staging area, a green room, a station on the trail of destination, the wood between the worlds (CS Lewis ~ The Magician's Nephew).

If you have questions about Audrey's role in S3, consider this.

A 4-hour essay.
I think he has found the key.

Every thread needs a theme tune. The TV show has the best theme ever heard, but the thread deserves a musical etude, and I think this applies both lyrically and atmospherically.

Twin Peaks used to advertise Japanese coffee in a can:

Ogdred Weary said:
Twin Peaks used to advertise Japanese coffee in a can:

Where is it referenced that, while in a coma, Audrey was raped by Evil Cooper?
Or is it just a supposition?

mikfez said:
Where is it referenced that, while in a coma, Audrey was raped by Evil Cooper?
Or is it just a supposition?
Click to expand...

Not watched much of that video yet and can't recall anything about that in the series.

I think in one of the Mark Frost "dossiers" probably The Secret History of Twin Peaks, been ages since I read it so pinch of salt and all that

TangletwigsDeux said:
I think in one of the Mark Frost "dossiers" probably The Secret History of Twin Peaks, been ages since I read it so pinch of salt and all that
Click to expand...

I bought that with much enthusiasm as few months after The Return ended and then... it sat on the shelf, ignored along with all my other poor books.

Started watching Joker with Techy. He didn't like it and I wasn't keen. There was summat about Joker himself that especially creeped me out.

Later I watched it again, alone, and this time I got it. Not the creepy thing, just the concept of how Joker ends up like that.

Anyway... I now realise that the creepy thing is that Phoenix's Joker in his melancholy clown make-up resembles late-career Michael Jackson at his wackiest, after all the surgery and what have you. 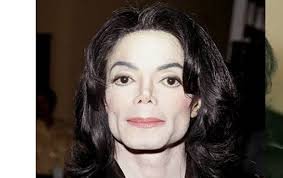 There are even more disturbing photos than that but you get what I mean.