What Have You Been Doing Today?

escargot said:
Ooooh, you should keep that.
Click to expand...

I did get in two and a half hours of exterior decorating, before rain and hail stopped play. Chilly out there - made the house seem very warm, when I shrugged and brought the ladders in . . .

Went to watch the 41 gun salute. It was loud.

I've been playing on my spurious convalescent status all day.

Not sure how long Techy will keep falling for the wan smiles and requests for hot chocolate to, y'know, keep my strength up.

escargot said:
I've been playing on my spurious convalescent status all day.

Not sure how long Techy will keep falling for the wan smiles and requests for hot chocolate to, y'know, keep my strength up.
Click to expand...

It won't be long before he rumbles you!

Been dismantling, sanding, repairing, rebuilding and treating one of the chairs of the patio set.

Out on the farm before dawn again, on a beautiful frosty morning. Frustratingly, I'd forgotten my phone, so - although I scored, I have no photos from the locus. Now read on:

My spirits had been raised on the drive in, as I'd had to slow down to avoid a roebuck and doe as they bounded across the road in front of me.

Despite this early good omen, the stalk in was a blank. Until, that is, I reached a point where my potential routes diverged; either left, my normal - though recently fruitless route - to the west spinney, or north to the small spinney. I chose north.

Almost immediately I spotted movement past the hedge over to the west. I assumed it was a hare, but the binoculars revealed it to be a Chinese water deer about 200 yards away. Nice to see, but irrelevant today, as they won't be back in season until 1st November. Dance card marked. 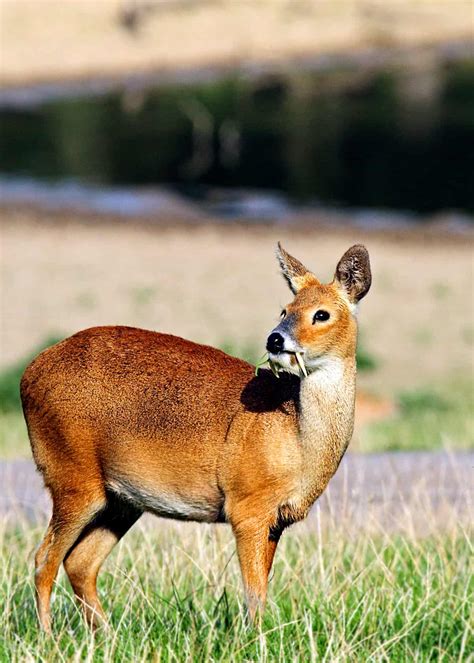 CWD. Yes, they have fangs

I watched the CWD for a minute or two, then continued northwards. Only about 20 yards farther on, I paused to have another look at the CWD. There he was, a little closer to me but still...wait a minute! That's not a CWD, it's a roebuck!

My range-finding binoculars gave a reading of exactly 150 yards: Game on! The buck had seen me, but had no idea what was going on, and was standing stationary, looking directly at me. I always prefer a 90° side-on shot, but you have to play the cards you're dealt.

Smoothly (hah!) I deployed my quad sticks and set up the rifle for the shot. I even had time to dial up the magnification on my telescopic sight from the default 6-power to 12x. Still the roebuck peered curiously at me. I placed the crosshairs just below his chin and gently applied 2½lbs. of pressure to the Sako's trigger...

The roe dropped as though he'd turned to water, dead in his own hoofprints.

I chambered a fresh round, then walked up to him. OMG: he was a big one! I began to reconsider my life choices... Oh well, get down to it.

I strolled over to my nearest gralloching tree about 350 yards away and deposited my kit, minus the bolt and cartridges from my rifle (safety first!). I also selected a stout branch about ¾" in diameter to assist in the drag. (Settle!)

Getting near my tree, I had to negotiate a ditch. Luckily, said ditch was almost dry. Unluckily, it was steep with muddy sides. Such fun! I'm glad that there were no primary school kids or little old ladies nearby, as I berated Mr. Meaty in gynaecological terms.

By the time I'd lifted him up in order to hook my gambrel on a convenient tree limb, I was debating whether expensive gym membership was really necessary.

The ¾-mile tab back to the car was...interesting. As I leaned, wheezing, against the side of the limo, I was reconsidering my hobby options - surely macramé doesn't deserve that bad press?

Back home, here's the monster on the hook and hairy: 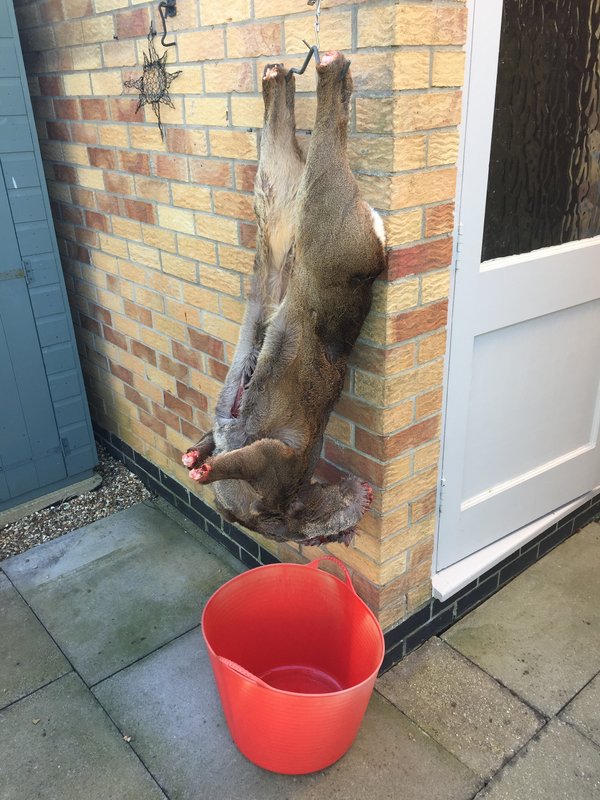 Like that, he was still 38lbs! Try carrying that, plus a 12lb rifle, binoculars, knives, quad sticks etc.

Anyway, a short while (hah!) later, here was the end result: 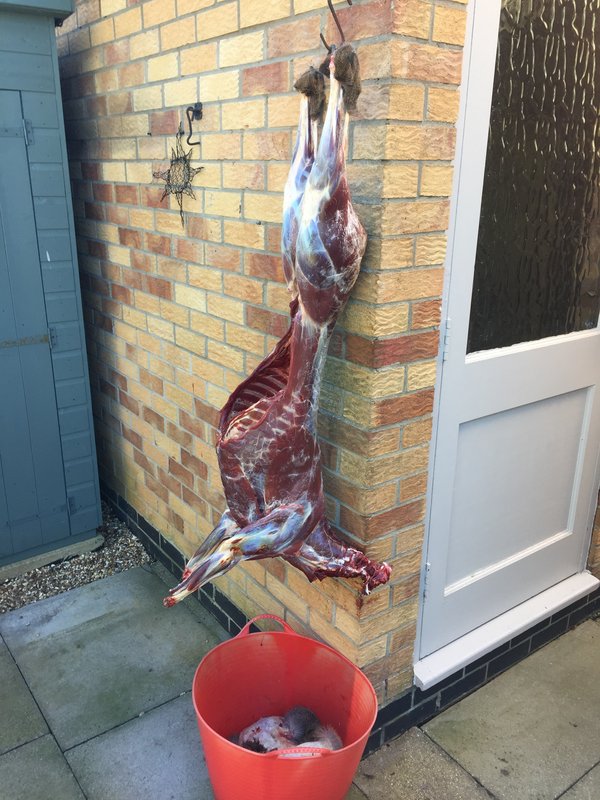 The punchline? It's not even for me! I owe this one to my farmer mate.

Amusingly, as I say, I'd forgotten my phone, so I couldn't ask my wife to open the side gate to let me in with the carcase. I got home and opened the front door, to have her tell me that one of her W.I. mates had been out walking her dogs, and had heard my shot. Realising what had happened, she'd messaged the memsahib, who'd opened the side gate in anticipation! Women, eh? Can't live with 'em, can't fit any more under the patio.

Now, after yesterday's exertions in the gym plus carcase recovery this morning, I feel as though I've been ridden hard and put away wet. Coffee'll sort that out!

Not, yet, but shorty about to remove the cobwebs from the from and side verandahs as well as the exterior windows. Not a fun job but the spiders habe been spinning widly of late and the place is looking untidy.

I have been sailing. found my local club does Sailability...also none of them possess optimists so the lake is relatively safe.

I finished the final chair of the patio set. All ready for selling now

some diy for my home cinema.

Started turning an old trunk into a toy box to sell

Then i tweeked my back, now im in pain, will be treating with alcohol later though

Today I finished and submitted an abstract. (Conference bothering is a great pleasure in my life).

Today I finished and submitted an abstract. (Conference bothering is a great pleasure in my life).
Click to expand...

Dad had the box on ebay for 4 months and it didnt sell so a change was needed, fashion being as fickle as ever i think a toy chest is more commercially viable, dont get me wrong i love wood in its natural state and have recently refurbished a patio set, finishing it off with just teak oil.

I just watched the last 2 films in the Tremors franchise (I bought the set of 7 recently).
At the end of the final film, it mentions 'Burt Gummer day' as being on the 14th of April - only 3 days ago!

And a good solid carcass, as you say.

escargot said:
I've been playing on my spurious convalescent status all day.

Not sure how long Techy will keep falling for the wan smiles and requests for hot chocolate to, y'know, keep my strength up.
Click to expand...

That’s only for the Premium section of my OnlyFans account.

I've been painting some decals on the toy box today

Just so the kids dont use it as a linen chest.

I went shopping today, and for the first time in ages went in a charity shop...too many cross stitch books and the one useful craft one I already have...

But, working on a Powerpoint for my next conference...

I finished the toy box decal, replaced a washer on the outside tap then made a start on the top.of the toy box

Just wrapped one time sink up and

Seven hours wandering over the maize fields of Oxfordshire. I've waited six months to get out metal detecting, but now I'm knackered and got Work tomorrow. There's such a thing as too much exercise and fresh air.

Souleater said:
I've been painting some decals on the toy box today

The Pixar lawyers are sharpening their metaphorical pencils now!!

There are at least 5 differences from the 'toy story' logo

Souleater said:
There are at least 5 differences from the 'toy story' logo
Click to expand...

I think Marks and Spencer's legal bods have a better case with Aldi's barefaced take-off of M&S's Colin the Caterpillar cake/Aldi's Cuthbert the Caterpillar, which deserve a place in the lookalikes thread!