What Have You Been Doing Today?

I handed in the keys to the storage unit - hurrah - I'll now be £85 a month better off.
Stopped in a village on the way back when I saw an old lady had fallen on the ground. She got up OK and seemed to be unhurt, but I had to check. She thanked me for stopping to help.

As it is my friends 49th today I asked her what she would like to do for lunch (my treat).
Initially she said that she would like to go to 'Pizza Hut' but then subsequently changed her mind to "Lets go to Ashridge Forest then walk down into Aldbury and get a pub lunch", which TBH sounded much better than Pizza Hut.
So that is what we have done today, including a minor diversion once we got down into Aldbury to check out another couple of possible eating places - one was a cafe type of place within the grounds of a farm estate but when we got there we discovered the menu was a bit limited, and odd. Then a walk to the only other pub in town (The Valiant Trooper) only to discover that it was closed for a refit that wouldn't be complete until after Christmas (which seems a bit of a dumb idea, surely it would have been better to get it done and out of the way before the end of November to take advantage of the pre-christmas period, or leave it until after the festive period?)
Anyway - an unusual side-note - also occurring around the area of Aldbury village is the ongoing filming of 'Lord of Misrule', apparently a horror film which has not been sold to a network or distributor yet (yes i've got enough front to actually walk onto the 'shoot' and ask people 'what is going on?').
https://www.imdb.com/title/tt11893676/?ref_=fn_al_tt_1
https://deadline.com/2021/10/tuppence-middleton-ralph-ineson-horror-lord-misrule-1234861645/

Working and getting ourselves prepared for our War Of The Worlds experience tomorrow.

A trip to the big smoke! This will be the first time either of us has left Sussex since the first lockdown.

I reported a construction project in our town to the environment agency for digging a trench from their site to a surface water culvert. This meant the run-off from their site was emptying into the river that runs through the town river walk. The same river where kids and dogs play in the shallows (the kids when it is a bit warmer). Another self-delivery developer recently picked up a £100k fine for the same offence followed by another £200k fine when they didn’t do enough afterwards.

Tempest63 said:
I reported a construction project in our town to the environment agency for digging a trench from their site to a surface water culvert. This meant the run-off from their site was emptying into the river that runs through the town river walk. The same river where kids and dogs play in the shallows (the kids when it is a bit warmer). Another self-delivery developer recently picked up a £100k fine for the same offence followed by another £200k fine when they didn’t do enough afterwards.
Click to expand...

This will make a dent in their profits.

CarlosTheDJ said:
War Of The Worlds
Click to expand...

It doesn't end well for the aliens

I had my Booster jab.

All praise to the Rotary club, wherever they are, for helping out

I was in the Abbey Gardens in Bury St Edmunds (Suffolk) today. Lovely how the old Monastery walls have been infused and augmented with more modern dwellings to keep everything intact. 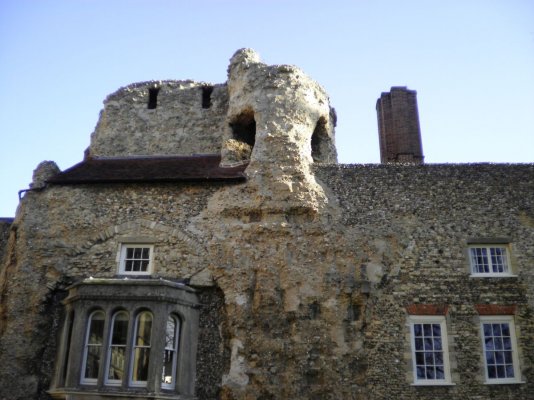 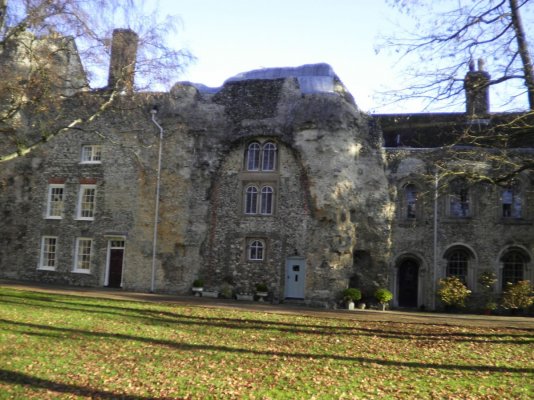 My brother has a book 'Wild Ruins' (Dave Hamilton - highly recommended) and when we get the rare chance for a jaunt across country, we try to visit at least one mentioned in that area. Not all entries have a picture, none so far have been visible from a road or parking spot. We don't have a smart phone with map apps, so it's a case of walking down a dirt track into gloomy woodland, hoping our sense of psychogeography won't let us down.
Today was St Mary the Virgin Church, in woods near Saxlingham Nethergate (Saxon) which is at the end of a single track road somewhere between Diss and Norwich (Norfolk). Originally built in the 11th century, tower added in 15th century, fell out of use with stone from the ruin used to repair another nearby church in 1687 and was left to the overgrowth. In 1993, a joint venture between English Heritage and the local Council saw the ivy and fallen trees (gale of 1987) leaning against the walls removed, with re-pointing and crack-stitching done to prevent further water damage.
The weight of centuries is on the landscape, you can almost taste the plague and blight and misery, but the site itself is remarkably neutral - we did check if we were trampling over a graveyard (it has happened) but there were no stones. The ruins of the church is still in regular use for public worship (says a sign - presumably when not raining). It rains every day. 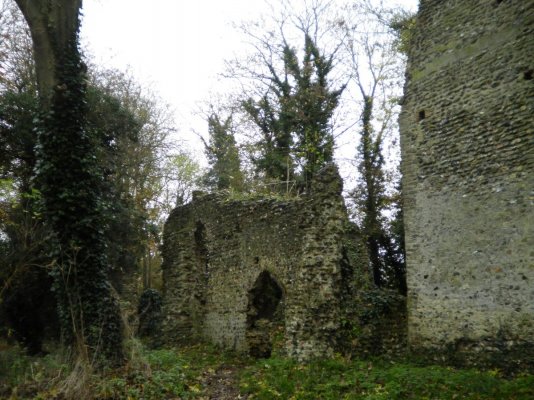 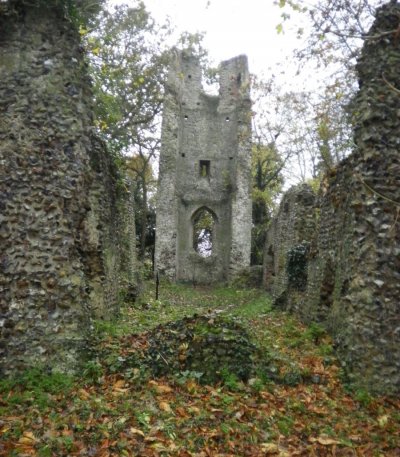 This morning the Mrs made us a mushroom omelette. I walked into town and spotted a couple of weird things on the floor outside the hospital that turned out to be spring loaded NHS looking needles so I took those into the minor injuries department to hand them in for correct disposal so kids wouldn't find them. I expect they'd fallen out of a staff member's pocket because that's where staff sit for their smoke breaks. I walked past the church, we've got some peregrine falcons that have been nesting at the top of the tower. There was a mutilated bird on the pavement so I kicked that to one side. It had the same markings as a falcon chick so it might have been one of those but I didn't want to get too close. I went to the arcades to play the two pence waterfalls and pinch any 2p coins that had fallen into the trays anyway then watched a fat woman get blown over by the fierce wind (she was OK), went to the shop I'm hoping to get hired to work in to familiarise myself with the products and lusted after the top range boots. I got back home and polished my C.V. I listened to the Mrs telling me why she'd refused a refund to someone at work which has got her place a 1 out 5 review on Tripadvisor. The customer didn't stay at her place in the end so Tripadvisor removes bad reviews under these circumstances. Scoffed some turkey sandwiches and chocolate brownies.

Stopped off in Morrisons cafe late morning after the snow , nearly empty because a fault in the kitchen meant no hot food. Had a fruit scone with jam and cream and a latte as the Xmas muzak playlist started. Bopped along with the Staff to Chesney Hawkes ...

I am the one and only

You can't take that away from me.

Swifty said:
I got back home and polished my C.V.
Click to expand...

Bad Bungle; I hope you put the jam on first.

Kondoru said:
Bad Bungle; I hope you put the jam on first.
Click to expand...

KICK OUT THE JAMS MOTHER FUCKER!

Today, I blobbed out in bed.
That's it.

Kondoru said:
Bad Bungle; I hope you put the jam on first.
Click to expand...

Today was first time scone was fresh enough to cut in horizontal plane without crumbling into a million pieces - usually I make the cut vertically. I'm given the choice of jam and say - ooh any will do - and then told there is only marmalade. Hate marmalade, but it's Xmas and if our good Lord can make sacrifices then so can I. Staff can never find clotted cream entry on till, got it free as she retires tomorrow. Got upgrade on the jam/marmalade to honey and then to new stock of blackcurrant as I sat down. Jam goes on one scone half, cream on the other and the two halves are squished together. Makes no difference to me if the top half goes on the bottom half or vice versa. No thank you I don't want chocolate sprinkles on my coffee, I am not a man-child - I am the one and only ...

In the mid-'70s the line Kick out the jams, motherfuckers! was used as a Radio 1 jingle.
As it was distorted or summat I only found out a few years what was actually being said.

I can only assume the Henry Rollins version of Kick Out the Jams was posted because every single copy of the MC5 original has been destroyed?

GNC said:
I can only assume the Henry Rollins version of Kick Out the Jams was posted because every single copy of the MC5 original has been destroyed?
Click to expand...

The MC5 version's on youtube still, I just posted the Bad Brains/Henry Rollins version instead because I'm a huge Pump Up The Volume fan .. "Do your homework in the dark and eat your cereal with a fork."

Swifty said:
The MC5 version's on youtube still, I just posted the Bad Brains/Henry Rollins version instead because I'm a huge Pump Up The Volume fan .. "Do your homework in the dark and eat your cereal with a fork."
Click to expand...


OK, that's an excuse I guess, but I always found Henry a bit of a silly little shouty man, even if he could lift me above his head with one arm.

Sprayed poison on three wasps nests. Got stung on the jaw by a wasp. Put camomile lotion on wasp sting. If I don't get super powers from this, I shall be very irked...

Techy and I met Escet and partner at Mow Cop (Safe Wiki link: local hill with folly) to enjoy the gorgeous 360-degree views and tramp around a bit.

From the top you can see several counties and lots of landmarks. Directly next to it are Staffordshire and Cheshire. The landscape on all of one side was snowy and the other, the Cheshire Gap, was still green.

We had a good wander until it started snowing. Time for the pub!

The hill in the distance - 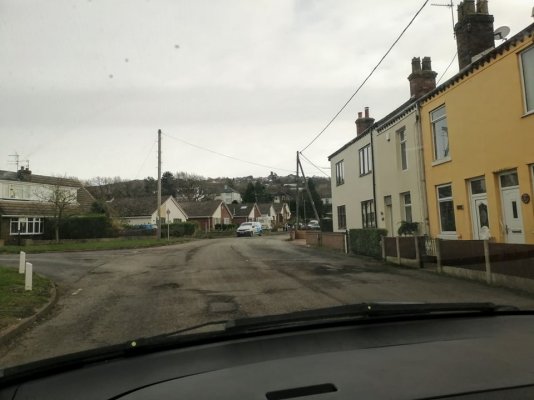 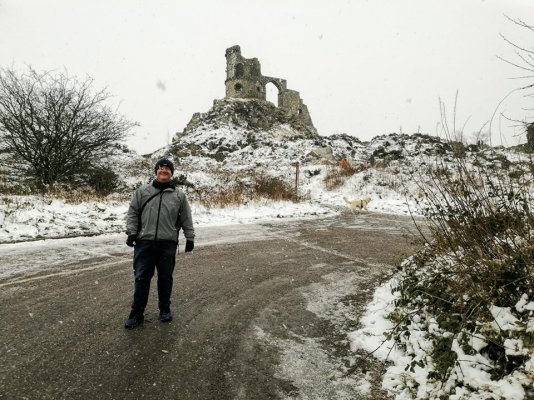 On way home we saw some 1920s steamrollers parked up at a pub.
Had to go back to lick them. Bliss. 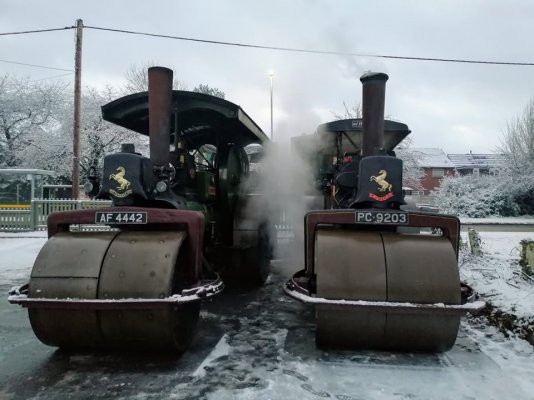 300 mile round trip up to the West Mids to see the family today.

Heavy snowfall all afternoon in Warwick, as we were leaving my Dad said "the snow is going to follow you all the way down the M40 until High Wycombe."

Sure enough, blizzard conditions all the way to the Wycombe exit...then it abruptly stopped and we saw not a single flake all the way home to Sussex.

Finally got the washing hung out.
Friend dropped in , back from South Australia attending a funeral.
She had to get a covid test before going over the border and after waiting 3 1/2 hours got it but had woken with a burst blood vessel in her eye as it went up so far.
Still went though and just came back from her doctor now she's back again., so was eager for coffee and chocolate Tim Tam.
You must log in or register to reply here.
Share:
Facebook Twitter Reddit Pinterest Tumblr WhatsApp Email Share Link
Top