What TV Are You Watching?

I started Outsider (based on S.King as is everything else today..). It went well for 4-5 episodes but then it just got so slow and meaningless.... the thing is killing children and feast on sorrow.... and it is contagious.... don't go there unless you have time to spare

Altered carbon season 2 really great, better than S1. SF tv as it should be.

I Am Not OK With This: teen girl develops ESP powers, pretty good as well.

Excellent documentary on BBC2 tonight about the 1970 Miss World scandal, some real characters in it, Miss Africa South especially. You can see why they'd make a film out of it, but I don't know if it would do the whole rigmarole justice. Laugh out loud funny in places (not Bob Hope's jokes) and thought provoking in others. On iPlayer if you're short of something to watch.

Season 2 of Kingdom is just as good as S1, the Zombie Horde scenes are perhaps even better. The palace intrigue continues along with Civil War. 9/10. On Netflix.

The Stranger on Netflix. Fairly gripping plot with a few holes but a rather watchable cast. Enjoyable.

ramonmercado said:
Season 2 of Kingdom is just as good as S1, the Zombie Horde scenes are perhaps even better. The palace intrigue continues along with Civil War. 9/10. On Netflix.
Click to expand...
It's changed since Stephen Fry left.

I caught another episode of Minder the other day. Suzy Quatro was in it. Improbably, she was Terry's current girlfriend.

hunck said:
I caught another episode of Minder the other day. Suzy Quatro was in it. Improbably, she was Terry's current girlfriend.
Click to expand...
Did the Fonz turn up to try and win her back?

sherbetbizarre said:
Did the Fonz turn up to try and win her back?
Click to expand...
He'd stand no chance against our Terry. Was she also in Happy Days then?

psychomania1973 said:
Just finished binge watching season two of Mindhunter on Netflix.
Click to expand...
First new series in a long time that I really enjoyed, along with The OA and You. Hope they do a third season!

hunck said:
He'd stand no chance against our Terry. Was she also in Happy Days then?
Click to expand...
Yep... 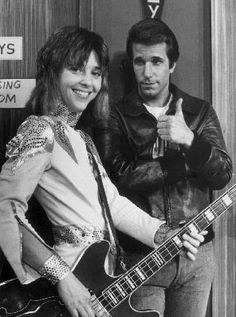 Click to expand...
Pinky Tuscadero if I recall correctly

Suzi Quatro was in everything back then!

We watched a new sitcom on ITV last week, Kate and Koji. Starring Brenda Blethlyn (she of Vera fame). (Which is the reason we watched it).

Not hilariously funny, but had its moments. We shall see tonight how episode 2 fares. A bit of light relief in the current circumstances anyway.
Last edited: Mar 25, 2020

Better Call Saul: @escargot is so right. Jimmy is total evil. And Kim... all everyone's thinking is "How is she going to die?!"

Started 'The Mandalorian' as we now have Disney+.

Loved the first episode, the tone was spot on.

An Aussie political/spy series called 'Secret City' on Netflix. Based in our nation's capital city, Canberra, a fine, though boring place, it's actually rather watchable (lots of good local actors in the cast).

Mythopoeika said:
Suzi Quatro was in everything back then!
Click to expand...
And still is!

Mind hunter
Altered carbon
I'm not ok with this
Kingdom

Tiger King on Netflix. I won't spoil it for you.

Thanks to my son (who bought me a big new TV at xmas) I now have the netflix. Not that I have found much of any good on it, however it has allowed me to rewatch (and catch a couple of episodes I missed originally) of the fabulous "Trailer Park Boys".
Also watching "Star Trek: Discovery" which is quite good, if a little disjointed and seems to suffer from some minor 'continuity' errors.
Also rewatching "Come Fly With Me".
I wanted to watch "Terminator: The Sarah Connor Chronicles" as I originally only managed to see Series 1, but it doesn't appear to be available.

Location
Under the floorboards, taking notes...

Lord Lucan said:
Tiger King on Netflix. I won't spoil it for you.
Click to expand...
Let me guess, it involves neither a Tiger nor a King?

I am currently working my way through the first season of Ajin - Demi Human. Brilliant Japanese anime (but most anime is brilliant!)

I'm getting quite addicted to Minder & seeing who crops up in it. Yesterday my ex classmate from school was in it again playing a heavy, something he wasn't particularly suited for, being fairly tall & skinny. The only words I heard him speak were "all right". He narrowly missed being thrown in the Thames by Terry.

Also finished This Country. What a fantastically well-deserved, bittersweet, hilarious show. Highly recommended.[/QUOTE]
Very funny sitcom. I haven’t seen series three yet though. I’m saving it because I like it so much. Yes I am mental.

*I'm planning on spending isolation writing a hit TV show about a long-haired buff fella who spends all day moaning about everything, and calling it "The Bitcher".

Lord Lucan said:
Tiger King on Netflix. I won't spoil it for you.
Click to expand...
It's certainly spoiled the life of the woman they accuse, apparently with not enough evidence. Nice work, Netflix.

Lord Lucan said:
Tiger King on Netflix. I won't spoil it for you.
Click to expand...
Seen that the other night .

Saw a good doc on Netflix called The Pharmacist, about the opioid addiction/pill mill scandal in the USA. Shocking how Purdue Pharma had free reign to peddle there legal heroin unchecked for so long and tried to push it as non addictive. They have paid out millions in compo/lawsuits/whatever's but it's pocket change for them. A more fitting punishment to that family would be to make them take there "non addictive miracle pills" for at least six months , then cut them off and throw them in a jail cell to enjoy the cold turkey they claimed would not happen.

V interesting real life drama though, it all starts with the pharmacist in question looking for his sons murderer, he's an amazing investigator, he should get a job with the police/DEA. The guy really wanted to make a difference and he worked very hard to bring the dodgy doctors (drug dealers in white coats ) to account. Gripping and emotional watch. Blows the lid off the "ethics" of big pharma.

Some good films been on past few nights, saw City of the Dead last night ( never seen before) and interview with the vampire was on later. ( seen loads but it's one I can watch annually) Lost Boys (80s original not the crap remake ) was on last night too, another fave.

Seen a few kids films with my toddler, Cats and Dogs, Dispicable Me (on now) and a couple of Harry Potters.