Frideswide said:
Just seen this Do we already have this mentioned? ...
Click to expand...

Rynner mentioned it in post #31. Otherwise ... No, there's no discussion on it that I can find.

Thank you sir! so wikipedia says it's....

The Osmington White Horse is a hill figure cut into the limestone of Osmington Hill just north of Weymouth in 1808. It is in the South Dorset Downs in the parish of Osmington.[1]

The figure is of King George III riding his horse and can be seen for miles around. The king was a regular visitor to Weymouth and made it 'the first resort'. The figure is 280 feet (85 m) long and 323 feet (98 m) high and is best viewed from the A353 road.

In 1989 the figure was restored for a broadcast of the TV show Challenge Anneka, although the work was subsequently criticised by historians for doing more harm than good. Anneka Rice, presenter of the show, stated that planning permission and advice had been sought before the work.[2]

In August 2011 pranksters added a 'horn' made from plastic sheeting to make the horse resemble a unicorn.[3]

In 2012, it was announced that for the Olympics 2012, the horse would be cleaned and slightly recut to make it look like the original when it was cut in 1808. Restoration was completed on 11 March 2012, and Princess Anne attended a ceremony at which a new plaque made of local stone was revealed. The restoration was done by volunteers, who spent two years carrying out repairs.[4]
Click to expand...


which is an interesting sequence. It shows, for example, how cumulative distortions happen even with the best of intentions. In this case there was photographic evidence, but before that? I do wonder what the originals looked like.

Could there have been a snobbery element in the criticism of the Anneka Rice restoration?

Kondoru said:
I see no horse...

its not sacred; its just the vale of the White horse...

While you are at it, you can get in Waylands smithy, Seven barrows and the blowing stone.

(I can blow the blowing stone, can you?)
Click to expand...

I know nothing about it but I've found a picture of The Blowing Stone!

David Plankton said:
I've doodled chalk hill-figures as hares in notebooks with the intent of producing a finished painting. Never got round to it though. They were based on the Uffington figure as well. Might see if I can scan some.
Click to expand...

I'd love to see these, if you feel willing to share them and have the time to do so.

When I first saw the Whiteleaf Cross from the London train passing Princes Risborough (Bucks), I assumed it was a mean hombre with a stetson and a poncho. Apparently it's a cross (no record before 1700's) on a chalk cliff (very steep) that's natural and considerably older. Might have been phallic before being Christianised but practically all chalk crosses have that claim. Lower and Upper Icknield Way cross nearby and track along the top has a neolithic barrow (3,500 BC) that seems to be in use as a stunt cycle ramp. 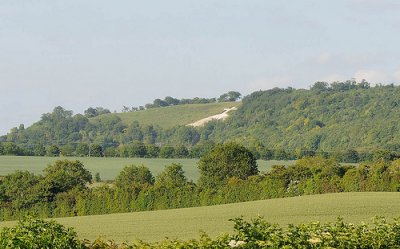 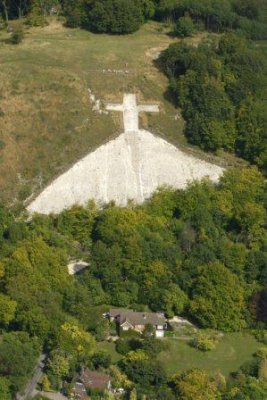 Location
Having a nice cup of tea and a sit-down.

I live in a spot surrounded by chalk figures in two counties - the Westbury (Wiltshire) white horse is a sad 'improved' version of the original Iron-age mythical figure, the original must have been a fine sight:

Then a bit further towards the Dorset border are the 20th Century Fovant badges, added by troops based in the area in (IIRC) both world wars and subject to periodic restoration:

The Osmington horse is close to Weymouth, which if you have the knowledge you'll already know about. If you don't then the seaside town is definitely not worth seeing or visiting at all*


*There may be a big fib contained in the last sentence. I don't want anyone else to visit and eat all the chips. It's a wondrous town with the old harbour, the best sandy beach, safe swimming great fishing and all the proper seasidey diversions. It's like the seaside we all remember from childhood, except it still exists in this place
You must log in or register to reply here.
Share:
Facebook Twitter Reddit Pinterest Tumblr WhatsApp Email Link
Top