While tying to find something out about the honey bear, I found this legendary monster:

HONEY ISLAND SWAMP MONSTER
Embedded link is dead. The MIA webpage (quoted in full below) is accessible (including images) via the Wayback Machine:
https://web.archive.org/web/20061213154612/http://honeyisland.americanmonsters.com/legend.html

For centuries a legend has haunted the Honey Island Swamp. A legend passed on from generation to generation. A legend of a huge creature, neither man nor beast, which lives in the deep cypress shadows of the Louisiana bayou. A creature that must, by every definition of the word, be considered a monster.

Less than an hour away from the chaotic heart of New Orleans lays a primordial backwater morass known as the Honey Island Swamp. Considered by many naturalists to be one of the most pristine swampland habitats in the United States, the Honey Island Swamp covers an area that is over 20 miles long and nearly 7 miles across, with 34,896 of its 70,000 acres government sanctioned as permanently protected wildlife area.

Known primarily for its catfish, snakes and alligators, the Honey Island Swamp is also known to be the home of black bears, red wolves, cougars, feral hogs and most notably, a dwindling population of Florida panthers. But there are some who believe that deep in the vast recesses of the swamp... in an area so impenetrable that one can only travel there by foot, horseback or boat... in a place so primeval, even experienced guides have known to become lost... there lives a ferocious predator more lethal than all others who lurk therein.

The legend of the Honey Island Swamp was first revealed to the world in 1974, when a pair of Air Traffic Controllers, Harlan E. Ford and Ray Mills, shambled out of the deep antediluvian sloughs of Honey Island with an unbelievable story... and something even more incredible.

The veteran hunters claimed to have discovered a pair of unusual footprints imbedded in the soft earth next to a wild boar whose throat had been torn open. They saw something else that day. Something that would change their lives
forever... they saw a monster.

They described a vicious looking creature that stood on two legs. A man-like animal that was covered with a coat dingy, gray hair. The men estimated that this beast stood over 7 feet tall and weighed somewhere between 400 and 500 lbs. But what they remembered most were its sickly yellow eyes, set far apart on its skull, and the horrific stench which surrounded this creature... it was the smell of death.

Thus begins the first official report of the Honey Island Swamp Monster, but the stories of this enigmatic beast date back for hundreds of years. Native Americans called this creature the Letiche, "a carnivorous, aquatic-humanoid" which they believed was once a once an abandoned child who was raised by alligators in uncharted regions of the swamp. Cajuns called the beast the Loup Carou, which has often been misinterpreted as a werewolf. This animal has been blamed for the numerous human and livestock deaths which have plagued the area for decades.

Perhaps the most bizarre legend surrounding the swamp monster revolves around a train wreck which allegedly occurred outside of the Pearl River in the early part of the 20th century. According to this account, the train was full of animals from a traveling circus, some of which escaped into the swamp. While most of these tropical beasts perished soon after, legend has it that a troop of chimpanzees survived and even went so far as to inter-breed with alligators. The result was a bizarre colony of repto-mammalian hybrids, which became legendary as the Honey Island Swamp Monsters.

The mystery continues to this day with more and more eyewitness reports filtering in on a yearly basis. Whatever this animal is, three things are for sure... this creature is large, it is carnivorous and it does not want to be found.


ANOTHER OPINION
Embedded link is dead. See later post for the MIA webpage's content.
Last edited by a moderator: Sep 7, 2022
A

I live right up the road from there in Picayune, MS. That's about 15 minutes from my house (I actually stp at the gas station there to buy lottery tix and liquer as my county is a dry county). My landlady's father knew the guys who said they saw this thing. I'm really interested in exploring that rea some, but it looks too wild from what I've seen of it. It's something like from story books. The cypress roots that grow up from the ground in spires has a freaky fantasy look. I need to get pics of those one day.

the Honey Island Swamp covers an area that is over 20 miles long and nearly 7 miles across,
Click to expand...

Surley a sasquatch would need a bigger range?
U

Somewhere (I forgot where) it was shown that the tracks of the Honey Island Swamp Monster were actually the tracks of a 'gator.
I

I was quite an enthusiastic junior-cryptozoologist in my youth, gleefully clipping every crypto-critter news account I could find in the newspapers and adding them to my bulging scrapbooks, the Honey Island swamp critter then receiving a great deal of coverage. I proudly showed my collection to a family friend who was an experienced hunter and trapper, had spent most of his life camping in the outdoors, and who had a passing interest in bigfoot-type creatures. It seemed that as he had been relatively close to the Honey Island swamp on a recent hunting trip, he'd decided to camp out there for a couple of weeks to 'see what was up', talk to the locals, and see if there was anything to the stories. He was of the opinion that while there may very well be bigfoot-type creatures living in the pacific northwest and other areas, after having seen the Honey Island swamp for himself and talking to the locals, he came away from the experience with the definite feeling that the whole thing was, in his words, a scam. A hoax perpetrated by the locals in the wake of the ''Legend of Boggy Creek'' movie, in an attempt to generate some tourist dollars. While I would love for him ( RIP ) to be proven wrong, I have always felt that any self-respecting bigfoot/yeti/skunk ape worth his saggital crest would need a whole lot more space for a decent habitat and to avoid being seen more often.

According to legend and supposed eyewitness accounts, it's a 500-pound beast, part man, part animal, with bright yellow eyes, covered in hair from head to toe, and about eight feet tall. It wanders through the moss-covered cypress trees in Honey Island Swamp, which is in eastern St. Tammany Parish, Louisiana, about 40 miles from New Orleans. Nola.com recently published a great article about the creature, including some history of the legend, and some fascinating eye-witness accounts. Nola.com explains:

Over the decades, numerous people have talked of an ape-like creature or creatures living in swamps. Like other "monsters"—Loch Ness, Bigfoot—the Honey Island Swamp Monster has developed an enduring legend. The monster has its own Wikipedia page and has been the source of numerous news stories and documentaries. Talk of the monster, of course, is also a staple of some of the swamp tours operating in the area.
Click to expand...


The Truth Behind the Honey Island Swamp Monster
by Willie Shughart​
Louisiana’s Honey Island Swamp boasts a “monster”. It is said to be some seven feet in height when standing (though it sometimes moves quadrupedally), covered in grayish hair, and to have stunning amber-glowing eyes (LaGrange 2000). While there have been eyewitness sightings of the creature, the majority of evidence comes from its tracks: strange footprints with three long, webbed toes and a fourth shorter toe on the inside of the foot, and a long, rounded heel.

Author’s sketch: A typical footprint attributed to the Honey Island Swamp Monster​
The first of these tracks were found, as well as the first sightings had, by Harlan E. Ford, a hunter who had grown up in the Louisiana wilderness, and his friend, also a hunter, Billy Mills (Nickel 2001). They found a slain feral hog with the aforementioned tracks around it, and later claimed to have had several encounters with the creature itself (LaGrange 2000).

All in all this makes an interesting case for the files of Cryptozoology– that is, until one realizes that the tracks of the “monster” are actually hind-prints belonging to American Alligators, Alligator mississippiensis (Clothier, personal communication; personal observation; confirmation by a herpetologist). And, since alligators are highly common residents of Louisiana swamps, Ford and Mills certainly should have known this, and, not to make accusations, but perhaps they did. At any rate, since it can then be established that there is no actual physical evidence of the Honey Island Swamp Monster, and, in fact, eyewitness accounts come mainly from Ford and Mills, there is very little reason to consider this Swamp Monster a cryptid– certainly it becomes all the less likely.

There is then the matter of the exceptionally similar Fouke Monster, another swamp-dwelling creature native to Fouke, Arkansas, in the extreme southwest of that state. By description it would seem to be identical to the Honey Island Swamp Monster, so might this not support the existence of it? It would, but its tracks seem to be those of alligators as well. It is also worth noting, although it is more likely than not to be a coincidence, that the most important sightings of both Swamp Monsters were by men named Ford; in the case of the Fouke Monster, Bobby Ford. There was also an alleged sighting of the Honey Island Swamp Monster reported by a Harry Ford and his wife. Ford is, of course, a common enough name however.

Another question about these tracks arises when it becomes evident that there have been no fore prints of alligators found. This may be attributed to the overlapping of tracks (Clothier, personal communication), or perhaps any number of other factors. At any rate, there can be no doubt that the tracks attributed, in many cases by individuals familiar with local wildlife, to these Swamp Monsters, are those of alligators.

It is possible that the “monsters” themselves were actually another cryptid, either Napes (a term coined by Loren Coleman; semi-bipedal chimpanzee-like creatures reported from nearby regions) or the Eastern Sasquatch. Even if so, it becomes clear that the matter of the tracks, at least, are either nothing less than monstrous misidentification, or the work of a hoaxer. Either way, the existence of these so-called cryptids becomes far more dubious and greatly less likely.

Nickel, Joe. July 2001. “Tracking the Swamp Monsters”. Committee for the Scientific Investigation of Claims Of the Paranormal Investigative Files. http://www.csicop.org/si/2001-07/i-files.html

That print is a seal flipper. Probably a walrus. 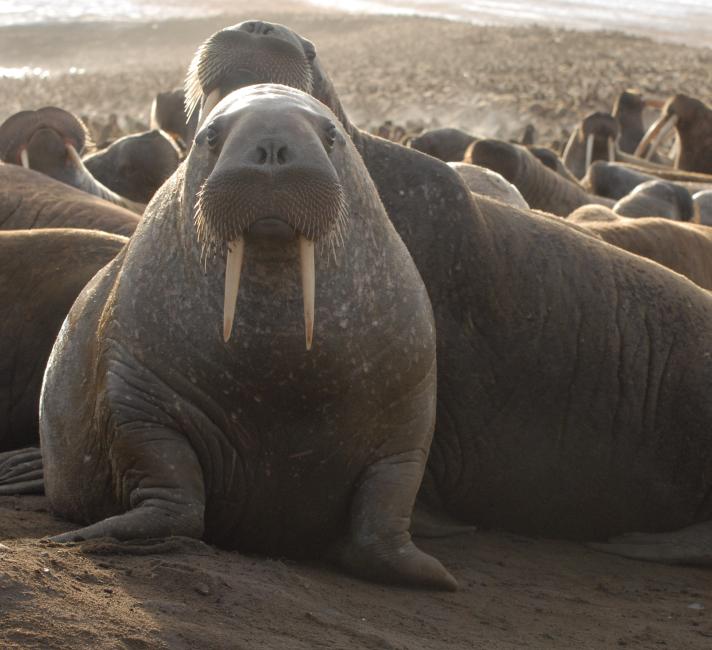