I can't find any previous mention of these oddities here on the FTMB.

The Mysterious Green Orbs That Float by Day and Sink at Night
Known in Japan as marimo, the unusual balls of algae seem to follow a biological clock that helps them pursue sunlight while underwater.

These mysterious green orbs occupy cool lakes in the Northern Hemisphere in places like Scotland, Iceland and Ukraine. In Japan, they are a protected species and official national treasure.

Under certain conditions, marimo form when a type of algae bind together and roll in the currents in the bottom of shallow lakes, collecting in large colonies. Sometimes the orbs — which can grow to nearly a foot in diameter — rise to the surface during the day, and then sink back down at night.

Marimo contain many mysteries. But now, at least one has been solved. In a paper published this week in Current Biology, biologists at the University of Bristol in England described how this fuzzy freshwater friend floats and sinks. The algae regulate photosynthesis with a biological clock, and in the process, release oxygen bubbles that carry them toward the sun. ...
Click to expand...
FULL STORY: https://www.nytimes.com/2018/08/24/science/marimo-floating-algae-balls.html?partner=rss&emc=rss 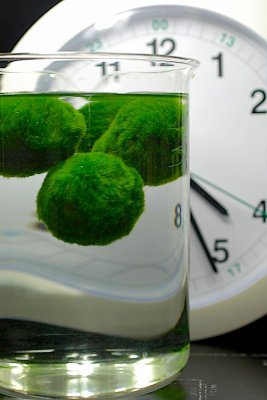