Photographs Of The Past

The story is amazing, if true. But I don't see any reason to disbelieve the story....

The photos are low-res which is a real shame. I have tried to find contact details for Rita Swift, but the only email address I can find is no longer valid.

What does everyone think...
J

Looks like someone took photos of a TV to me.

I agree. Someone 'borrowed' the camera and snapped away at the nearest thing- the TV- then carefully put it back.


Who was present when this outrage was perpetrated- the daughter and the cat?

Hmmm, that little girl is far too innocent-looking. My money's on Mittens!

It's an interesting story, but the photos are too indistinct to make out the details as described. You have to rely on 'rita's' description of the photos.

THe vignetting or whatnot on photo #17 is defiently odd.

I would like to see the entire negative strips scanned. But yeah, probably TV.

I used to take close-up pictures of TV with a digital camera. Ewan McGregor's face from his ER guest appearence became part of a http://www.crookedsixpence.net/title.jpg for my student website.
B

Would pictures of the TV not have scan-lines on them?

It should be possible to get a decent scan of the negatives at a really high resolution, if they exist, but I would be surprised if they do. It's another one that looks too good to be true imho - although perhaps a convincing fake would look worse for this reason and these are for real. My instinct says otherwise.
R

Again, first thing I thought was TV.
Def one where the negatives would provide far more clarity on the subject. As of this moment, I'm not so much blaming the lady for a possible fake, just maybe a misunderstanding on her behalf.
J

Breakfast said:
Would pictures of the TV not have scan-lines on them?
Click to expand...

Not necessarily. I remember seeing quite good photos of a TV screen taken with an old 110-style camera, and you couldn't see any scan lines.

Anonymous said:
The vignetting or whatnot on photo #17 is defiently odd. ...
Click to expand...

That's not vignetting, and I think that's a clue to what these photos really represent ...

Vignetting refers to a gradation of brightness or color saturation applied to direct a viewer's focus to the center of a picture.

There's a distinct circular border around these photos rather than a graded fading. I think these represent circular matting or cropping on a still picture.

Possibility #1: These last 3 1969 photos were taken of 3 hardcopy (perhaps framed) photos that were matted or cropped within a circular border.

However ... I don't particular like this option #1, because it would be odd to have 3 photos of what appears to be a single gathering or ceremony, at least two of which seem to portray a sequence of events.

First, a brief side note ... I don't think the figures in the photos are Native Americans. Look at the hair and attire. The hair makes me think African or Polynesian. The attire tilts me toward Polynesian. owing to the frilled trim of the 'vest' (vestment?) and collar visible in photo #17.

Now ... What would be encountered as a set of photos illustrating a sequence of events involving some exotic indigenous culture from another continent?

Photo of Hemi Pomare from 1846.
The sole survivor after his family was slaughtered by a rival Maori tribe on the Chatham isles, Pomare was taken by British traders first to Australia, where he attended school and then to London, where this photo was taken.
The remarkable colourised photo is thought to be the earliest ever taken of a native Maori: 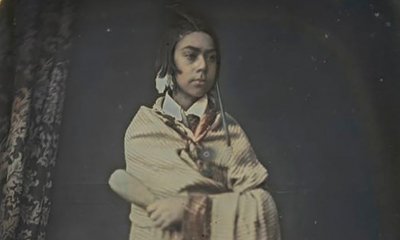 I think he first case is very much Occams razor

That area did indeed have cremations, fwiw: